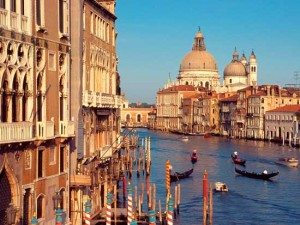 Venice is still called La Serenissima (The Most Serene Republic). This was a title bestowed upon the city by a pope during one of the rare periods when Venice and the pope were not at war with each other. Venice’s history of 1100 years is littered with warring, plotting of wars, profiteering from other nations wars and counting the loot brought home to them. A city only the size of New York’s central park overwhelmed Constantinople the greatest and richest city on earth and by 1500 it was the largest empire in the west. The Campanile or Bell tower presides over St. Mark’s square, which has become the centre for Venetian life. Venice began to consolidate her role as a maritime empire during the Middle Ages. It is during this period that the Byzantine influence became part of its artistic vocabulary that, when mixed with the native Roman style and the Gothic from Germany created an architectural style that is regarded as unique. The gondola so famous now in Venice was first mentioned in 697. Originally they were richly decorated and came in many colours, until 1562 when, during a wave of austerity it was decreed that all gondolas should be painted black. At twilight they remain the most romantic of sights in this most romantic of cities, The Venetian gondola was designed to transport the nobleman from the water gate of his palace to another or, by the most direct water route, to his villa in the Veneto. There he could relax and leave the cares of city life far behind. 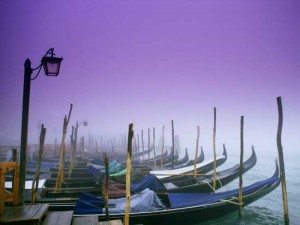 Richard Florida’s award winning book The Rise of the Creative Class 2002 was groundbreaking, considered a must for leaders of our time. It was about new ways of thinking, expounding the theory ‘creativity’ was intrinsically human. It wasn’t about skin colour, origin, gender, or how rich or poor you are,…