Three of Sydney’s premiere cultural institutions, the Art Gallery of New South Wales, the Museum of Contemporary Art, and Carriageworks, have come together to present a single exhibition The National 2017: New Australian Art, the first in a series of three biennial surveys. This is a landmark project which provides a major focus on Australian art of our time. Through exhibitions in 2017, 2019 and 2021, this new partnership will exhibit the work of 150 artists. The collaboration has resulted in an exhibition that would not have been otherwise possible, in terms of scale or curatorial scope. It is presented as a single exhibition across three institutions, but has been developed collectively. New works have been commissioned, and recent works are shown, in a project which has enabled the cultivation of close relationships between curators and artists, as well as between the institutions. A number of pieces have been commissioned as part of the project, including two major commissions. Sydney-based Alex Gawronski has created three installations, one for each of the three galleries, that transpose architectural elements of each institution into another. And Agatha Gothe-Snape has begun a film project that will develop from 2016 to 2021. Both these are sure to be drawcards, and will require visits to all three sites, as well as across time. The art within The National 2017 is not presented as any sort of identifiably ‘national’ art, nor is it making any kind of statement on national tendencies, characteristics or identities. The curators of the exhibition: Anneke Jaspers and Wayne Tunnicliffe at the AGNSW, Lisa Havilah and Nina Miall at Carriageworks and Blair French at the MCA, go so far as to imply there is a provocation in the title ‘The National’ as a result. Three essayists – Sunil Badami, Daniel Browning and Helen Hughes – have been commissioned to comment on the general concept of art in Australia, to further crystallise the nuances of what it means to make art from and for an Australian context at this point in time. The essayists Badami, Browning and Hughes, their writings present within The National 2017: New Australian Art catalogue, explore the concept of Australia as an entity forever under construction, a nation built on violence, and how this has affected the evolution of art and art history in Australia since the coming of the Europeans. A number of artists, from a variety of backgrounds, further contemplate this concept, as they present their interpretation of their own lived experience and the experiences of their communities. One such artist is Yhonnie Scarce. Born in Woomera, South Australia, and belonging to the Kokatha and Nukunu peoples, she works primarily with glass, addressing historical events and government policies which have resulted in disrupted Aboriginal life. A new installation commissioned for The National 2017 sees Scarce explore the tragic outcomes of the British nuclear tests conducted in Maralinga, South Australia in the 1950s and 60s. Death Zephyr, on display at the AGNSW, is a beautiful but heartbreaking work which draws to light the ongoing effects of the testing, including displacement of a number of Indigenous communities (comprising Scarce’s ancestors), as well as the illness and death resulting from radiation fallout. Home Décor (after M. Preston), the final series from artist Gordon Bennett, who passed away in 2014, presents a different view of Australia, just as thought-provoking and unsettling. This series, also on display at the AGNSW, is appropriated from the work of Australian modernist artist Margaret Preston, who herself appropriated Indigenous art in the 1920s and 30s to create a variety of works, and who suggested that her art might look good on placemats, cushions, and all manner of homewares. Bennett has ‘re-appropriated’ these works into large scale works, giving them the impression of ambitious formalist paintings. As curator Wayne Tunnicliffe describes, Bennett “points to the troubled history of modernism’s search for an authentic national ‘self’ and shows how something as simple as home décor can resonate with nation-building ideologies and enterprises, as well as with unresolved issues and tensions around race relations and national identity in Australia today.” Potentially controversially, this work takes the shape of a Catherine or rose window, inspired by the Gothic cathedrals of Europe, but with a twist, as a spiral is incorporated within the design. The Catherine windows of these great churches were considered to be a channel for worshippers to move beyond life on earth and enter the realm of the divine, and the placement of this modern interpretation within the 19th industrial rail shed that is Carriageworks invites questions and contemplation of significance of protest as well as the surrounding architecture. An intriguing set of works on display at the MCA is One Hundred Vessels by Matthew Bradley. This work is less overtly political than some of the other art on display in The National 2017, but nevertheless is still aesthetically delightful and insightful. The artist set about creating one hundred metal cast vessels, one hundred being the number which might be the measure of practise required to attain a good degree of competence working with intricate designs. An extensive selection of vessels, cast in bronze, aluminium or copper, are on display, including a number of the failed vessels, which very much adds to the melee. The attainment of competence is only achieved through trial and error, but the inclusion of the failed vessels hints that human existence is vulnerable on many fronts, with potential collapse possible at any time. 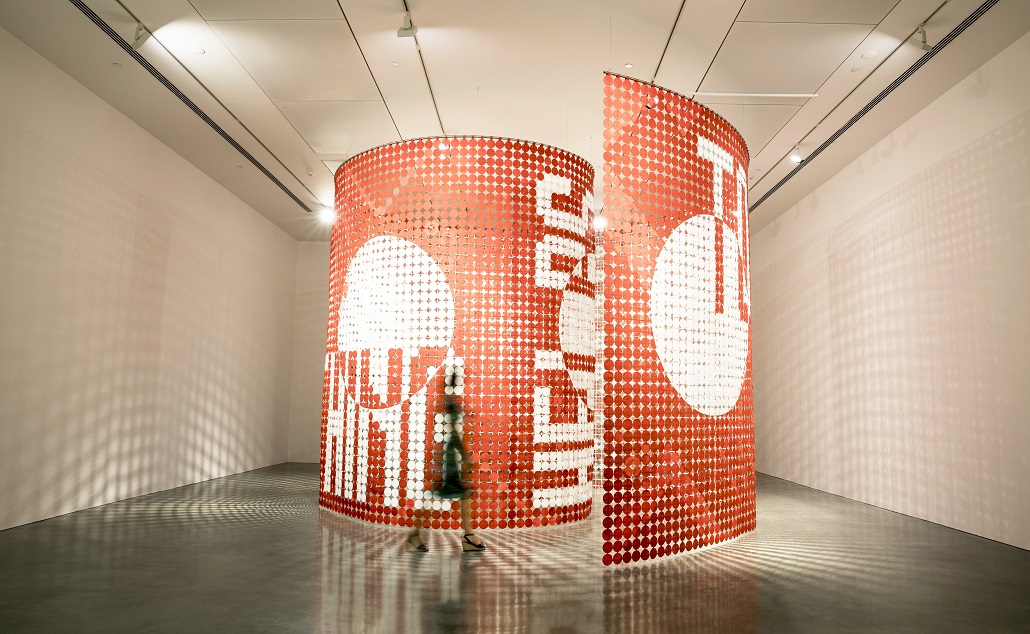 The wide array of artists and ideas on display at The National 2017: New Australian Art, now showing until July, 2017 is truly a great initiative. One that sees Australian art and artists coming into the fore, showcasing their ingenuity, and forging a new identity for Australian art, however broad that might be. Meeting New Zealand born painter, sculptor, drawing and chalk artist Amelia (Mealie) Batchelor, whose view of life is a continual journey of discovery, has been one of great joy. We met at Brisbane where we had both found ourselves after leaving the cities where we were born. Me Sydney, she Auckland.