Look up this year at the Orchid Show, courtesy The New York Botanical Garden

Everything is coming up orchids in New York.

The Orchid Show brings ‘winter relief in bloom’ and is a welcome annual aspect of the programs presented by The New York Botanical Garden (TNYBG).

Each year it is an unforgettable departure from the everyday, in America’s premier urban garden.

Spring has sprung yet again and until April 19, 2015 they are showcasing the glories of the orchid with ‘chandeliers’ made from these stunning flowers in bloom.

There is no doubt that the orchid is one of the most desirable plants and collectable flowers in the history of botanical beauty.

Orchidaceae is a diverse and widespread family of flowering plants that exploit its environment both physically and biologically wherever it finds itself.

Its fabulous blooms come in all different sizes and shapes and are often colourful and fragrant, seducing its propagators as well as people to their favour with their visual and sensual allure.

Cattleya and Phalaenopsis are both popular blooms featured throughout The New York Botanical Garden’s stunning relic from another age the Enid A Haupt Conservatory, one of the most spectacular survivals of ‘crystal palace’ architecture anywhere in the world.

The many different varieties and species that abound create a dazzling array, some of which arch out on cane like stems creating a fantastical fountain or chandelier effect.

The New York Botanical Garden has used their natural habit for the mounting their Orchid Show in 2015.

This year the exhibition, which is both spectacular and informative has been designed by Francisca Coelho.

She is renowned as “the best female head gardener at present working under glass.” Known for her plantsmanship and design skills in developing, planting and maintaining the permanent plant galleries and seasonal shows, Francis began her career three decades ago.

Chinese philosopher Confucius in ancient times compared the virtuous man to an orchid reflecting ideas of humility, integrity, and refinement, the virtues of a perfectly cultured gentleman and scholar.

From Burma, India, Thailand and the Philippines to NE Australia, Papua New Guinea, China, Japan, Indonesia and Fiji to Mainland Tropical America, orchids have become the premier flower in the global floral industry.

Some 30,000 orchid species grow naturally in rain and cloud forests, high up in tree canopies on old wooden stumps or on trunks suspended over rivers.

They challenge botanists seeking to establish both their identity and evolutionary relationships.

Yet others thrive in the foothills of the Himalaya Mountains by clinging to trunks or thriving in cracks in rocks, where they hope to survive the annual monsoon. 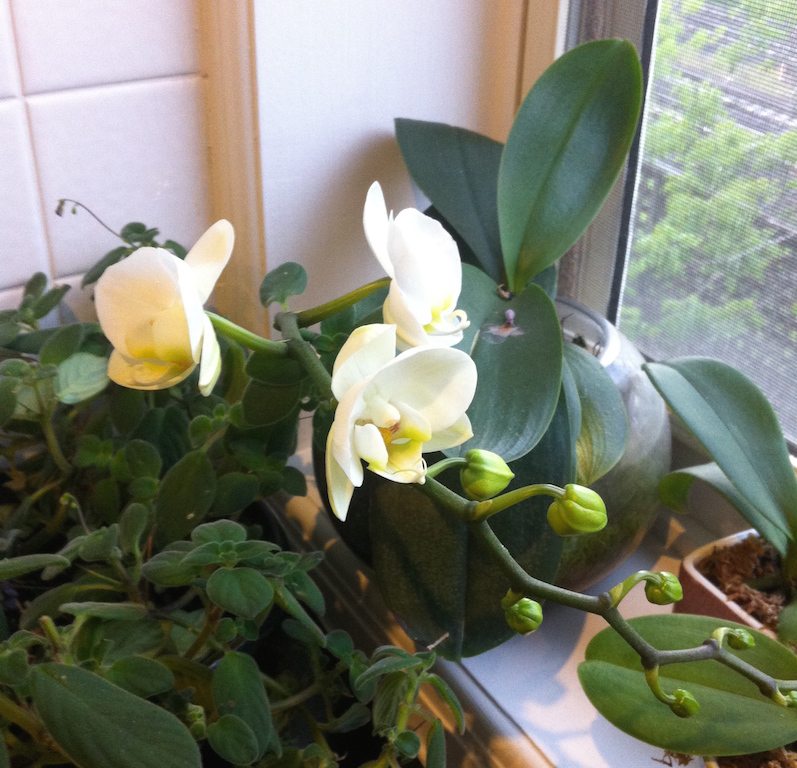 And, then there are those living happily on my window ledge facing into the eastern sun down under at Melbourne in Australia, where they also live well and prosper.

Orchid flowers have specialized reproductive parts and their pollen is a single mass, which means that individual grains of pollen cannot disperse as with other flowers.

They perpetuate their kind by using all means available to them, including being pollinated by both bees and flies. Each orchid flower in its lifetime has only one chance to transfer pollen to another flower. The garden’s Arthur Ross vice president for horticulture and living collections Todd Forrest knows of a variety that resembles female wasps and the flower is pollinated with the assistance of male wasps buzzing from plant to plant in their futile attempts to mate.

Charles Darwin (1809-1882), whose renowned theory on the evolution of species astounded the world, carried out detailed research on orchids. He was fascinated with everything about them, treating them like celebrities.

His observations recorded in his publications of 1862, 1869 and 1877 began the scientific approach that founded a global role model in the field of evolutionary botany for over 150 years. Inside the Enid A. Haupt Conservatory – courtesy The New York Botanical Garden

There are 6,085 orchids representing 2,261 taxa (different types) in garden’s permanent collection, representing all of the floristic regions of the world, including Australia, Africa, South America, and Madagascar.

The New York Botanical Garden is committed to orchid research and conservation and its scientists study the botany and ecology of orchids; their discoveries are useful to conservation work helping to ensure the future of these extraordinary plants in nature.

Associated with the show are many events, including Orchid Evenings, dance performances, hands on orchid care demonstrations, themed tours and nature walks. The New York Botanical Garden is located on property owned in full by the City of New York, and its operation is made possible in part by public funds provided through the New York City Department of Cultural Affairs. The New York City Council and The New York State Office of Parks, Recreation and Historic Preservation provide a portion of the Garden’s general operating funds.