G’day Oprah. Welcome to Australia. The first image we have of you in Australia is cuddling a Koala, the quintessential shot to have. As you tour around Australia in these last weeks before Christmas in pursuit of happiness on your ‘farewell tour’ we would wish that you go well.

We can see that you have already visited Uluru, the mega rock slap bang in the centre of the country, a place most people in Australia will never see because of the costs involved with going there, much like the Grand Canyon or Yellowstone National Park.

I know we tried once to take my three sons to see this great wonder of the world as a family adventure. Up until then we had enjoyed local beach holidays. But they were of an age we hoped to inspire them. So we had a travel agent plan an itinerary to fly,  stay at the rock and complete some tours around the area. One week for five would cost $10,000  WOW we thought that’s huge. Perhaps we had better see what else we can get for our money.

So by way of contrast we planned another itinerary to take them to Disneyland, the place they most wanted to go aged 10, 12 and 14.  It was three weeks long and took in Disneyland, Yosemite National Park, San Francisco, Los Angeles, Los Vegas, The Grand Canyon and a stopover at Hawaii on the way home. You guessed it, it was the same cost so we chose the trip that offered the most value for money at the time.

And, that’s just what you are Oprah. Great value at any price. If anyone has ever proved being a genuinely nice person works through and through you have.

This week at Melbourne there you were on stage with both the Premier of the State of Victoria and the Prime Minister of the country. On days gone by it would have seemed a completely unlikely scenario for anyone to achieve in Australia, let alone an American daytime television host visiting Australia. So how good is that.

Politicians have sure changed their tune during my lifetime.

The designated O correspondent from Australia’s Channel Nine reported that many people in Melbourne camped out overnight in Fed Square to gain a front row spot so they could see this amazing woman the world has seemingly gone gaga for. It was like the Queen’s visit from England in 1953 all over again

All you did Oprah was speak for fifteen minutes and wave at the crowd. You didn’t sing or dance, but they were there in their thousands hanging on every inspiring word. It was amazing. 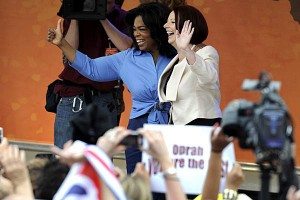 Oprah you are mega money for Australia and an extremely effective ambassador for your own country. But you are also so much more than just that.

You came out of a time when race, creed and colour were huge issues in your country and have contributed to changing attitudes, philosophies, fashions and passions. In short you have had a huge impact on changing culture, including ours.

When I was in my early teens I sat in front of my sister’s  black and white television and were appalled at how black people were treated in America, especially in the south. I had just read the Diary of Anne Frank and despised racism.  Mind you, Australia’s track record with our own indigenous people was apalling too, especially in the countryside, but hey this was now the country of the ‘fair go’ and thankfully attitudes were changing  here too.

I had at that time only recently been in Tamworth in NSW where my cousins and their parents crossed the road in the town one day rather than walk by an indigenous family. I hadn’t seen them all cross over and was suddenly aware of being alone (aged 13) and saw them beckoning to me to cross too. When I realized why I was enraged but held it in and as I walked by the family smiled and said good morning. Needless to say they were overcome too and just all nodded. I had to put up with quite a tongue lashing from my uncle afterward.

I remember watching Martin Luther’s promise of a dream speech delivered fittingly at the Lincoln Memorial in Washington in 1963. At the time what he dreamed seemed to be an impossible vision. But if he was here now he would surely applaud you Oprah. You have brought people together by appealing to the women of your country who are also the mothers and teachers of the next generation of men.

In a world in a monetary crisis with everyone holding back on spending in our model of western economy, whose premise is based on us all being good consumers together, Oprah,  you are good business for both Australia and America. Its a simple fact. Your trip has been part of a farewell to daytime television after 25 years.

On January 1, 2011 Oprah has announced that everyone can be part of a new network of people interested in reaching their greatest potential by becoming member’s of  OWN: The Oprah Winfrey Network,  a new 24/7 cable network devoted to self-discovery and connecting people to their best self and to the world.

Oprah will get a chance to explore all of her passions on the air’, including the issues that matter health, home and relationships. You just need to OWN IT will surely become the catch cry for millions of women world wide.

This week at Sydney Oprah you will take over the Sydney Opera House or should I say ‘Oprah House’, so you can stage the final shows of your ‘farewell season’. The audience is guaranteed to be 300, because Oprah has brought them all with her, as you do when you are a mega million dollar industry. An Aussie lottery has swelled their ranks to include women from all walks of life and all backgrounds from down under as well.

Oprah will be sure to encourage the bonding process so that women on either sides of the Pacific will keep in touch. And with Aussie celebrities on stage it is sure to be a great show.

We also know there will be many surprises because Oprah we know that you loves surprises, as the announcement of your tour down under with a mock up Qantas Jet and Pilot John Travolta showed. And, we are sure you will include lots of heartwrenching and uplifting Aussie battler stories as well. 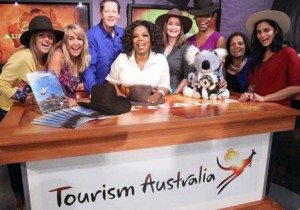 Good on you Oprah. You have been and are a role model for generations. You will show your own countrymen and women there is no challenge they cannot surmount through hard work and love, which is the western way.

You are a worldwide phenomenon connecting communities together. You’re not just a television host any more, but a deity, offering hope to millions.

I can only imagine how proud Martin Luther King would be that you have helped fulfill his dream. And that now finally people in America and Australia (because your attitudes have influenced ours) are just people ‘and not judged by the colour of their skin but by the content of their character’.

Oprah, you have put the O in OWN, the D in Dream and are simply ‘outstanding’ in every way. For many you are the Santa Claus coming down the chimney or in the door this holiday season.