The garden is a timeless expression of man’s relationship with nature, delighting our sense of sight.

Just as our world is changing to accommodate man’s overpopulation of it, so must our minds always be open to new ways of ensuring our relationship with nature continues.

Each spring, as the first rays of the sun begin the winter thaw in the New York Botanical Garden (NYBG) in the Bronx, tens of thousand of beautiful orchid blooms are being massed for an annual event enthusiasts from all around the world travel to see, its famous orchid show.

Creating an irresistible world of fragrance and color, NYBG horticulturists assemble thousands of flowers from the garden’s research collections, as well as the finest growers across the country.

From the rare and oldest to the unusual and iconic, orchids of seemingly every conceivable colour, shape, and provenance will be on display. Rendering of a waterfall, showcasing orchids in the wild, during The Orchid Show: Orchidelirium 2016, courtesy New York Botanical Garden

The NYBG is celebrating its 125th Anniversary in 2016 and this year’s show starting February 27, will see orchids ready to play their part in met morphing New Yorker’s out of the dark cold days of winter.

The Orchid Show: Orchidelirium is aptly named, celebrating a time when plant hunters were employed by wealthy patrons to track down exotic and rare varieties of orchids to cater for very rich, manic collectors.

The clamour sent prices into the thousands of dollars for one bloom, causing a state of hysteria, much like tulips did during the 17th century.

Now you can buy them in a supermarket!

Since the early 19th century gardeners have produced more than 100,000 and cultivars, so to know them, means having to amass a great deal of knowledge.

A number of factors came into play at that time which helped people in cities to begin to engage again with the natural world.

One of those was the founding of the Horticultural Society in London in 1804, with the encouragement of the Director of the Royal Botanical Garden at Kew, Sir Joseph Banks.

It proved so successful by 1842 there were 200 branches all over England alone, and then they took on the rest of the world. Intrepid plant hunters braved the wilds of foreign climes and jungles to bring home new specimens, which could mean not only instant social success, but also great wealth.

However hothouses with varying temperatures were required so they could ensure the success of raising exotic flowers from the Southern Hemisphere.

Its structure was inspired by the first Great Conservatory built 1836-1841 at Chatsworth, one of England’s great Treasure Houses in Derbyshire for the trendsetting Duke of Devonshire, who began collecting orchids around 1833.

Then the success of Queen Victoria’s Consort Prince Albert’s Great Exhibition in 1851 in London held in a purpose built great ‘crystal palace of glass’, inspired further advances in technology.

Visitors to the landmark Enid A. Haupt Conservatory New York’s great glasshouse, which opened in 1902, will be bedazzled at The Orchid Show: Orchidelirium, which also shines a spotlight on the NYBG Orchid rescue and conservation efforts.

Displays revealing orchids as they grow in the wild, in much the same way plant hunters encountered them will be sure to fascinate 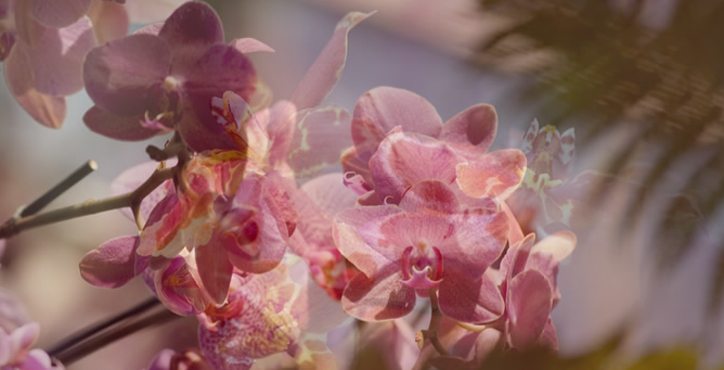 There will be orchids cascading from branches, nestled in crevices and reaching up from under rain forest trees.

Visitors will be transported on an epic journey, engaging all the senses the displays all aimed at underscoring the allure and intrigue of these exquisite beauties. Glasshouses required complex heating and cooling systems, a great amount of water, plant production houses, and a staff of gardeners, horticulturalists and designers, who kept the displays alive and thriving.

Coming in all shapes and sizes, as well as species, it doesn’t matter if you have a home with a garden or an apartment large or small; you can always nurture an orchid somewhere.

Mine thrive wonderfully on an east-facing windowsill.

The number of orchid species in the world is about twice the number of birds and four times more than mammals.

NYBG’s celebrated permanent orchid collection features plants from Australia, Africa, South America, and Madagascar, and this exhibition will showcase some of its most unusual and rarely seen gems. Specimens of the spectacular Psychopsis papilio inspired the Duke of Devonshire at Chatsworth house’s obsession with orchids that contributed to Orchidelirium in London. They will be on view along with the equally spectacular Paphiopedilum sanderianum, named for the German-born orchidologist and nurseryman Frederick Sander (1847-1920), the self-proclaimed ‘Orchid King’, which is renowned for the remarkable length of its petals.

The NYBG is charged with nurturing and bringing back to health orchids collected illegally in the wild and seized when crossing international borders.

NYBG’s orchid experts, Matthew Pace, Assistant Curator of the Herbarium, and Marc Hachadourian, Director of the Nolen Greenhouses and Curator of the Orchid Collection, are at the forefront of modern orchidology and conservation.

Marc Hachadourian curates the exhibition’s orchid selection and the NYBG’s extensive groupings of living plants from around the world.

They are housed in the Nolen Greenhouses as well as behind-the-scenes glasshouses, where plants for the Garden’s indoor and outdoor displays and science program are grown and maintained.

Christian Primeau oversees the extensive tropical/subtropical plant collections housed in 11 unique environments in the Conservatory. He designed The Orchid Show: Orchidelirium, which is a dynamic opportunity for the NYBG to reaffirm its goals, as well as for the public to experience its mission in action.