‘To each century its art, to art its Freedom’ was the credo of the modernists at Vienna (Wien) during the period that began with the founding of the Vienna Secession, a society of Austrian artists, who staged their first exhibition in March 1898.

With an act of youthful idealism, a spirit of sacrifice and displaying a willingness to work hard, they plunged headlong into leading Vienna into a new age of modernity.

Modernism is a term the art community has adopted in recent years to describe the many and diverse styles of art and design created between 1880 and 1940. There was so much going on all at once.

Not to forget Scottish architect, designer, water colourist and sculptor Charles Rennie MacIntosh (1868-1928), who was the main exponent of Art Nouveau in the U.K and architect designer, writer and educator an all round genius, Frank Lloyd Wright (1867 – 1959) in America.

The development of art and design at Vienna, at the turn of the twentieth century was all about painting, drawings, sculpture and graphic art, as well as design in architecture, furniture, jewellery, costume, ceramics and glass. 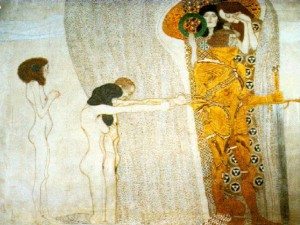 At Vienna where the waltz once reigned supreme, during an age of empirical opulence, new attitudes were surfacing in its literature and intellectual ideas were reflected in the music of composers such as Gustav Mahler and Arnold Schönberg who wanted to abandon established norms.

The personal façade of the citizens of Vienna, that had been so carefully cultivated for centuries, was under scrutiny as new thoughts about gender and sexuality were emerging.

Many were seeking to establish essential truths about the body and the mind as it wasn’t about what you appeared to be any more, but who you were and your words, your deeds and your actions now needed to be aligned.

To gain an understanding of the inspiration for the ‘modern’ movements in Vienna we need to regress to the early nineteenth century when Viennese born painter, designer, craftsmen, historian Austrian Josef Danhauser (1805-1845) saw himself as a thoroughly modern man. 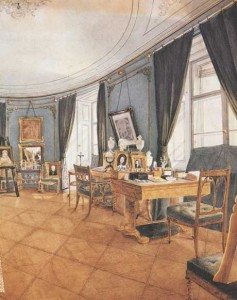 Following his father’s death in 1829 at Vienna he found himself designing whole rooms as he brought his families furniture factory into that era of modernity.

He placed an emphasis on simplified forms, stylization of motifs and pared down decoration. The rooms he designed had more in common with Hollywood or Paris they were so visionary.

His distinctive style is recorded in a collection of drawings at the Österreichisches Museum at Wien (Vienna) where wallpaper and fabrics he designed anticipate the modern movement by nearly a hundred years.

Vienna during Danhauser’s time was the capital of the vast Austro-Hungarian Empire that stretched from Italy to Russia. Its citizen’s had embraced elegance and opulence, although they were restrained now by a constricting conservatism brought about by the repressive political climate they now lived under following French Emperor Napoleon’s rout of Europe. Prince Klemens von Metternich (1773-1859) instituted strict political censorship enforcing a comprehensive espionage system that kept the government informed of potential subversive movements. 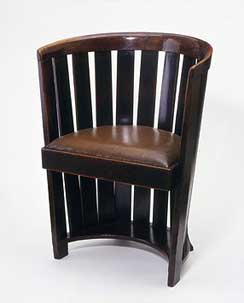 As a consequence citizens refrained from protest or criticism and withdrew into political indifference, while cultivating a style of sheltered domesticity. And there they stayed until long after his death, bound by fear.

The industrial revolution of the nineteenth century as it progressed was rapidly changing the face of the rest of the western world. By the beginning of the twentieth century in Europe, England and America immense wealth was generating a new and youthful society with different priorities and objectives.

They were clamouring for the best life could offer.

Their aspirations and expectations were far different from that of their parents. Their views less dogmatic, manners smoother, prose and morals much easier. At the time England was indisputably the greatest and richest nation in the world with no rivals seriously threatening its trade and industry.

The upper and middle classes were enjoying this supremacy. 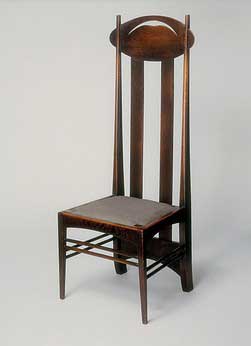 ‘Life without industry is guilt, and industry without art is brutality’ said English author and art critic John Ruskin 1819 – 1900.

He became a moral guide or prophet, if you like during the latter years of the nineteenth century. He resented social injustice and squalor, which was a direct result of a ‘greed is good’ mentality that accompanied the unbridled capitalism of the late nineteenth century brought about by the Industrial Revolution.

It led him, as Cambridge’s Biographical Dictionary states, ‘to expound a sort of Christian communism for which his critics denigrated him’. His only regret it seems was, at the end of what was a long life that he had not, like St. Francis, denuded himself of his own wealth.

The influence of his words was profound, especially on the next generation of artists and craftsmen who were leading the way toward Le Style Moderne.

He was a lover of aphorisms a short clever saying that expresses a general truth…or defines a moment or state of mind. We may always know what is right; but not always what is possible. Vienna’s art world in the latter years of the nineteenth century embraced the leadership role of the U.K. and its designers, such as Arts and Crafts Leader William Morris and Scottish designer Charles Rennie Macintosh, who were in a desperate fight to combat goods produced by the factories of the Industrial Revolution.

Mackintosh cultivated a rigorous formal economy of design, which very much appealed to the Viennese Secession and its leaders Otto Wagner, Josef Hoffman and Josef Maria Olbrich.

They were so impressed by his austere aesthetic that they invited Mackintosh to exhibit at the eighth Vienna Secession exhibition, where his exploration of line and taste for monochrome was much admired and received a great deal of critical acclaim.

The new Vienna was struggling to leave behind the conservatism of the past to eagerly embrace contemporary ideas and change under the influence and leadership of its artists, intellectuals and scientists, who were helping to imagine a very different future.

The now famous Die Zeit facade highlights Austrian architect Otto Wagner’s commitment to bold innovative design. This full scale replica copies the original of 1902. It showcases the use of aluminum and the decorative feature of its light fittings. 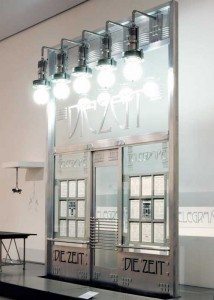 Otto Wagner (1841-1918) won a major planning competition in Vienna in 1892. He launched his dictum of form following function that found near perfect expression in the aluminium and glass façade, he created in 1902 for the newspaper Die Zeit, which was demolished by 1908.

Reconstructed in 1985 in Vienna, this copy of the facade incorporates the original light fittings with large round white ‘cracked’ glass shades.

Their finish was in turn inspired by ‘cracked ice’ decoration on porcelain, originally developed in 12th century China. Reputedly inspired by the reflection of a sunny blue sky in the ice of a stream cracking with the first spring thaw, it was perfected by ceramicists.

The glittering nickel plated iron, aluminium and glass form of the façade reveals the refined, minimalistic lines that are still an intrinsic and important aspect of contemporary visual culture.

Painter Gustav Klimt, whose brilliant individualism dominated the era, led a group of primarily young Viennese artists, painters, sculptors and architects as they seceded from the prestigious Kunsterhaus (Artists House) to set up a Society of Austrian Artists – the Vienna Secession. At the Stoclet the Dining Room contained murals by Gustav Klimt and furniture by Josef Hoffman.

Their aims were purely aesthetic and founded in Coffeehouse culture and the decorative arts magazine The Studio, which was devoured in all the capital’s stylish cafes.

Between 1903 and 1907 Josef Hoffmann and Kolo Moser and the Wiener Werkstatte established a basic model for the style that would come to fruition after World War 1, now known as Art Deco.

Viennese architect Josef Hoffman in 1905-11 designed the Palais Stoclet in Brussels for Belgian industrialist Alfred Stoclet. It was a villa built for a private financier, who ‘wanted a large house, he loved the arts and gave us an entirely free hand’, said Hoffman.

It has been described as a universal, complete, flawless masterpiece of a thousand years of architectural history.

Harmony governed every facet of this total work of art and it became the extreme statement of Viennese avant-garde design.

It was ambitious, an accomplished achievement of the Wiener Werkstatte, (Vienna Workshops) also founded by Hoffman in 1903.

A strange astonishing edifice it might have come from another planet, it was in fact transposed far from the city of its conception to a setting, which is still alien to it. It exemplified in embryo the major features of the coming Art Deco movement of which it was one of the great founding monuments.

World War 1 marked the great divide in the age of the moderns as war brought artists face to face with an alternative; either a clean sweep or hope of a reformed society, or alternatively the retention of a privileged art in the service of an elite and moneyed class.

It was an impossible dilemma.

While we should at all times respect traditional use, and those seeking to safeguard tradition, there are also times when citizens need to take the initiative to help inspire and invent the future.

At Vienna in the first decade of the twentieth century its artists certainly seized the day.

Night & Now, Elena Kats-Chernin’s Flute Concerto for her friend flautist Sally Walker has its premiere at the top and bottom of Australia with the DSO and ZMSO