The Tree of Forgiveness by Edward Burne-Jones 1881-1882, inspired by the work of his friends of the Pre-Raphealite Brotherhood, courtesy National Museums, Liverpool

The leading art critic, reformer and essayist of the Victorian era in England John Ruskin said ‘Good art always consists of two things: First, the observation of fact; secondly, the manifesting of human design and authority in the way that fact is told. Great and good art must unite the two; it cannot exist for a moment but in their unity; it consists of the two as essentially as water consists of oxygen and hydrogen’*

In style and technique the Pre-Raphaelite Brotherhood founded in 1848 in England, marked a return to the early painting style of what we now know as the Italian Renaissance. By way of contrast however, their subject matter was radical, contemporary of their own time and completely innovative.

They were desperate romantics, wanting to awaken the social consciousness for contemporary issues such as fallen women, illegitimacy and adultery by shocking complacent gallery goers.

They certainly managed to achieve that aim and were all involved in many many scandals surrounding their personal lives. Raphael depicted a self portrait in his master work, the School of Athens

Promising painters Holman Hunt and John Millais met at the Royal Academy School at London. They admired the style of works of art produced before that of Italian Renaissance painter Raphael (Raffaello Santi 1483-1520).

Hunt later recalled that he and Millais had been criticising Raphael’s Transfiguration when another student commented  ‘Then you are pre-Raphaelites”. They laughingly agreed the designation must be accepted.

Passionately connected, they all shared a common loathing for the stale imitators of Raphael, who they blamed for the decline of western art. When the suave, urbane debonair Dante Gabriel Rossetti (1828-1882) introduced himself to Hunt the triumvirate was formed.

As a group they were attacked for their alleged sympathies to the Oxford Movement and to Catholicism.

Millais responded with two works, Ophelia which would become one of his most famous and A Huguenot, on St Bartholomew’s Day, Refusing to Shield Himself from Danger by Wearing the Roman Catholic Badge (1852). Pre–Raphaelite painters sympathized with what is direct and serious and heartfelt in previous art. Most importantly, they wanted to produce thoroughly good pictures and statues.

Unlike other art movements throughout the centuries that evolved almost by osmosis, the Pre-Raphaelite Brotherhood gave conscious birth to it.

They even chose their name as part of their self marketing enterprise. These were young men full of passion with newly found ideals and in 1848 declared their intention. ‘to study Nature attentively so as to know how to express genuine ideas. Jesus Christ, LIght of the World by Holman Hunt

However to flourish they needed to catch the eye of the most influential art critic of their time John Ruskin (1819-1900). Dante Gabriel Rossetti had many ‘muses’…

They were reputedly all stunning beauties and became ‘famous’ female icons of indelible style, surrounded by a cult of beauty.

The most prominent were Elizabeth (Lizzie) Sidal, Rossetti’s live in lover until a lethal dose of laudenum carried her off; Annie Miller whose on-off relationship with Holman Hunt still intrigues many; Fanny Cornforth Rossetti’s model, mistress and consoling companion and, Janey Bourdon, who was the wife of Pre-Raphaelite sympathiser and Arts and Crafts movement leader William Morris.

A social activist he held the view that through Arts and Crafts people could find a way out of the industrial ugliness.

Following a trip to France in 1856 he and his friend Edward Burne Jones decided to devote their lives to art.

Morris entered the Oxford architectural office of G.E. Street where he met Phillip Speakman Webb (1831-1915) who was committed alike to the causes of art and socialism.

Morris the son of a country doctor grew up in Oxford almost untouched by the Industrial Revolution, a medieval city in an idyllic landscape. He wrote in later life ‘I was born and bred in Oxford and had no other teacher in art than the impressive objects of the old buildings there, the effect of which on my natural bent has never left me’.

After a short time Morris drifted away from architecture and inspired by a new friend, Dante Gabriel Rossetti decided to become a painter.

Following a lecture series Morris delivered on the decorative arts in 1877 he became a founding member of the Socialist League to pursue a change of direction for manufacture through quality design.

He and Rossetti would share much of their life, and Morris’s wife.

Rossetti became, for a while, a partner in Morris’s interior design venture, Morris & Company.

He enjoyed embellishing his interiors on a shoestring budget by creating trees on brown paper to place on the walls of his first house.

He also painted three panels of Love on a sofa that he designed later in life and covered it with a rich green Utrecht Velvet, his favourite Morris & Co fabric. This was in a period when he entertained an amusing circle of friends and followers at boisterous dinners, showing off his most recent purchases from junk shops as happily as he showed them his paintings or read them his poetry.

His descriptions of Tudor House interiors are well documented, and included Chinese blue and white porcelain, Indian and Islamic brasswares, Chinese hardwood furniture and old chests and cabinets which he went on a passionate search for.

His decor featured peacock blues and greens, popular colours of the period. He depicted velvet at windows and on upholstery, it was a rich luxurious textile of the day. A Rose smelling a Rose by John Williams Waterhouse

Poet Richard Le Gallienne observed that he ‘dwelt in mysterious sacrosanct seclusion like some high priest behind the veil of his old romantic house in Chelsea‘.

He was very much inspired by Dante Gabriel Rosseti, but was busy discovering his own ‘artistic voice’. While he is closely associated with the later phase of the Pre-Raphealite movement, he was in turn a star of a new movement in art, known as the Aesthetic movement,  which considered that ‘art should be valued as an object of beauty engendering a sensual response, rather than for the story or moral implicit in the subject matter’.

Burne-Jones was elected an Associate of the Royal Academy of Arts in 1885. His works have a haunting charm and are no doubt inspired by the desperate romantics, pictures that are romantically divined and infused with the passionate delight of form and beauty. 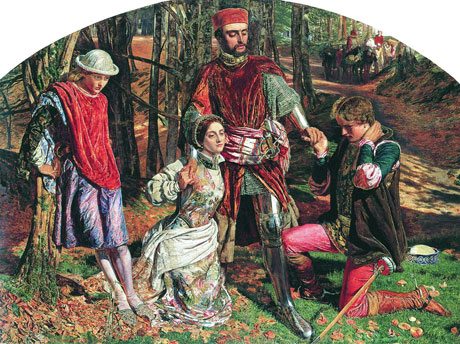 The movement was fired by the vision of sublime innocence and the transparency of colour in art. The Royal Academy of Arts at London 1st President Sir Joshua (Sloshua) Reynolds (1723-1792) was their chief ‘hate-figure’, as he had set very high standards in art and established ‘rules’ for its progression.

As they were ‘rule breakers’ this is no surprise. Desperate Romantics – a 2009 TV series in England featured the rebellious, talented and charismatic young men known as the Pre-Raphaelite Brotherhood.

They were wanting to stimulate their audience with precise and heightened attention to detail, such as painting real people with dirty toe nails.

While it was all very noble, it was an ideal they didn’t subscribe to themselves, as in all their art works there’s nary a dirty toe nail between them. There’s was truly a ‘romantic’ ideal.

They attracted much virulent criticism from people like Charles Dickens who likened Millais’s Virgin to a ‘monster in the vilest cabaret in France or in the lowest gin-shop in England‘. Vanity, exhibited at the Royal Academy 1937, painted by Frank Cadogan Cowper (1877-1958) often described as the last of the ‘Pre Raphealites’. courtesy Royal Academy of Arts, London.

Their paintings have, in the twenty first century become an emblem of a type of buccaneering, with their crystalline colours and eyeball challenges as they define one of the most distinctive moments in English art history.

Royal Academy of Arts Member Frank Cadogan Cowper (1877-1958) is an English painter who has been described as ‘the last of the Pre-Raphealites’. His ‘Vanity’ is very poignant. Today the Pre Raphaelite’s still draw wondering crowds to their images, even though the brotherhood flourished for only a few brief years, recalled by Dante Gabriel Rossetti later, as ‘the visionary vanities of half a dozen boys’.

It is imperative humans re-learn how to think if we wish to achieve; thinking before acting must be the new black, so we can re-learn to plant a new apple tree