The David Roche Foundation House Museum and Gallery (TDRF), Adelaide, South Australia’s next exhibition, The Pursuit of Pattern, will explore the fashion and ‘taste’ for inlaid surface patterns from the late 17th to the late 19th centuries in England and Europe. Showcased 22 January – 29 June 2019, many items will be drawn from the David Roche Foundation Collection, as well as public and private collections in Australia. He was only one of the craftsmen involved in the making of the table, which forms the logo for TDRF.  The base of the table is attributed to French furniture maker François-Honoré-Georges Jacob-Desmalter (1770 – 1841)

Marquetry, pietra dure, hardstones and micro-mosaics were all very popular techniques used in architectural interiors, furniture, jewellery and objects from the late seventeenth, up to and including the late nineteenth centuries in England and Europe.

South Australian philanthropist and collector David Roche AM (1930-2013), had a passion for them all. The great strength of his collection lies in showcasing European decorative arts of superb quality and the designers of fine furniture. They include Dutch born English based connoisseur Thomas Hope (1769-1831) and English master George Bullock (1777-8 – 1818), who specialized in inlaying brass into timber, inspired by the artistry of French maker Andre Charles Boulle (1642-1732).

Martyn Cook, Director of the David Roche Foundation says the collection also has a “… magnificent side cabinet, which can be confidently attributed to the celebrated English designer and cabinet-maker who specialized in inlaid work, George Bullock”.

His furniture was finely modelled with metal mounts and his use of marquetry from various woods and metals is highly stylized and dramatic.

His nationalism was much praised by his contemporaries. 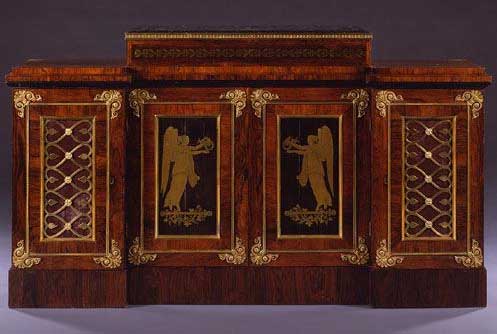 On this cabinet the winged figures of Nike to the central doors of the cabinet are closely comparable to the figures of the goddess that appear on a sofa in a plate of Grecian Furniture to which Bullock’s name is attached in Ackermann’s Repository of May 1816.

Another wondrous table, also attributed to George Bullock (1782 or 3- 1818), has an inlaid top of pietra dura (hardstone), stunning to behold. 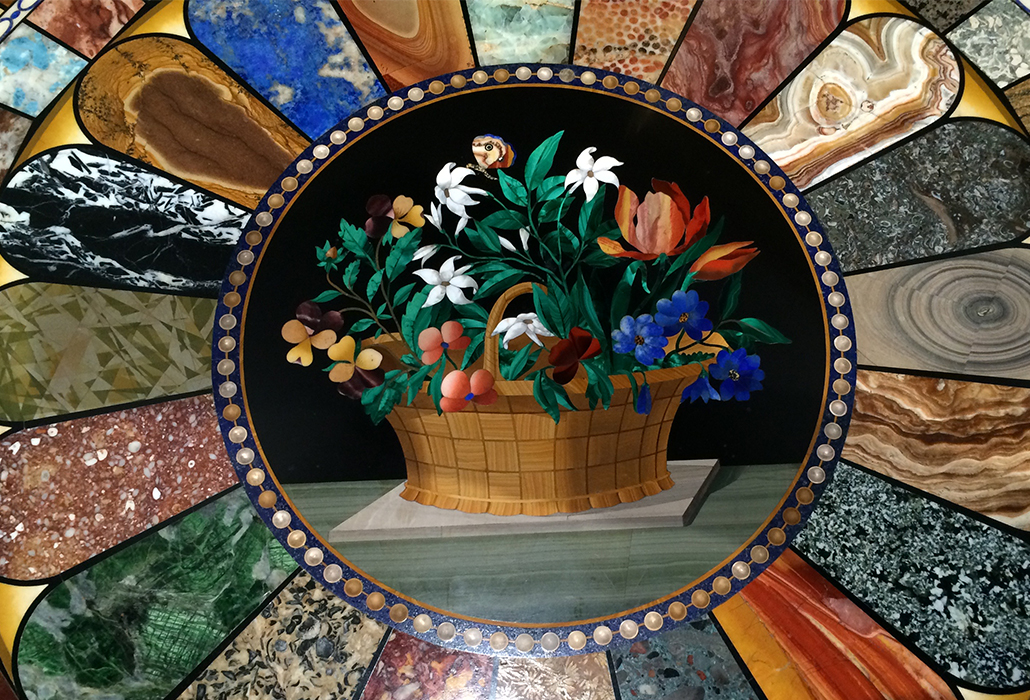 Pietra dura is an Italian term for hard or semi precious stones, including such as agate, jasper, lapis lazuli etc., as distinct from marble stones.

Their hardness means they were worked with instruments similar to those employed for cutting precious stones for jewellery; techniques originally highly developed in ancient Rome, revived in Renaissance Italy and again in Europe during the late nineteenth century. 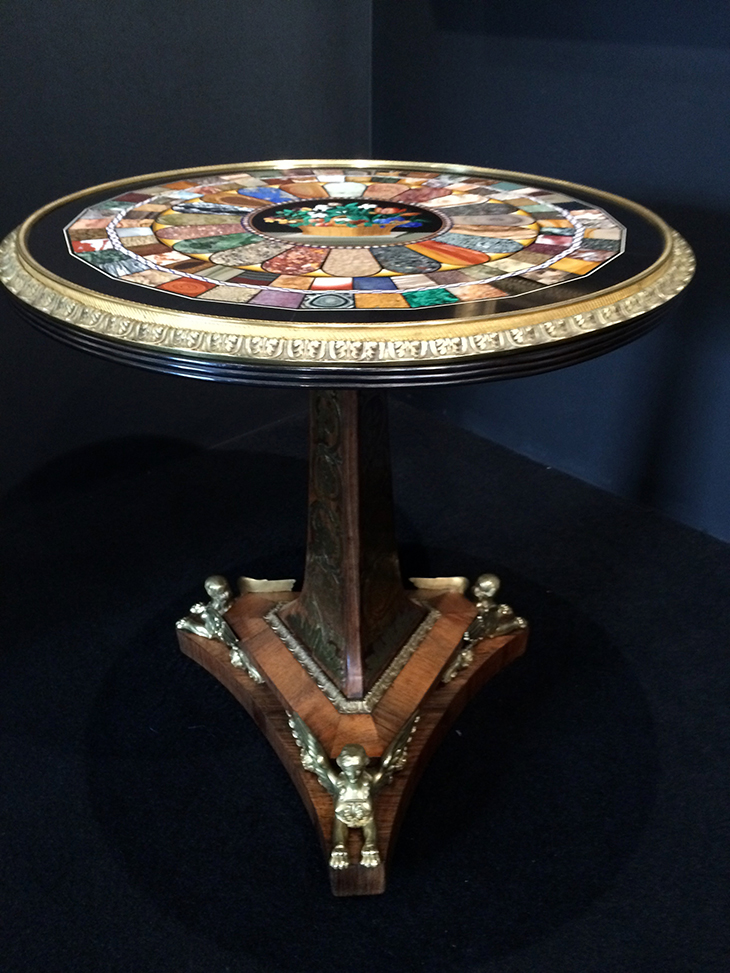 Imagery used was reminiscent of pattern books and herbals of the sixteenth and seventeenth centuries. Many of the motifs used were also copied on woodwork, needlework and decorative painting of the same period. During the late nineteenth century results of excavations of both Herculaneum (1738) and Pompeii (1748) in Italy, which had been ongoing on for over a century, inspired creative minds to innovate new designs and patterns based on the past. Detail of Alexander from the Mosaic of the Battle of Issus

English Grand Tourists in particular collected Micro-Mosaics during the eighteenth and nineteenth centuries when all roads led to Rome.

The art of mosaic ornamented the floors of domestic buildings in ancient Greece with the Romans turning them into technical tours-de-force.

They employed glass and other semi-precious and precious materials to create images also infused with tiny vitreous beads of glass made into oblong tiles known as tesserae. William Hogarth: The Rake’s Progress, 1732-1734, the morning levée of his country men, who adopted many French customs

By the late seventeenth and early eighteenth centuries in England and Europe the new rulers of taste thought of themselves as ‘payers of the piper’ and consequently believed they should ‘call the tune’.

Fine furniture at the time was mostly produced for nobles, whose houses were designed to ensure the progression from one room to another gave a full sense of their importance. 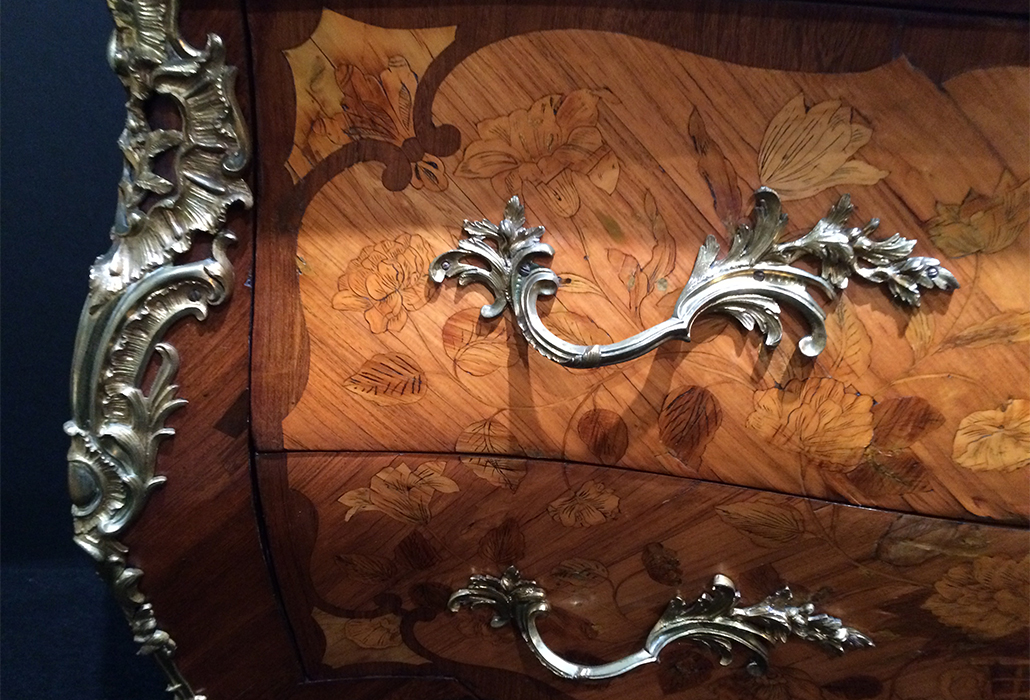 Marquetry on furniture and objects was admired from the moment it arrived on the scene.

The inlaying of a veneered ground with other veneers in different exotic timbers to make a pictorial pattern, reflected the considerable skill of the experienced craftsman. It also provided a vision for what sort of patterns could be achieved from simple to complex; scrolls, figures, birds, animals, grotesques, arabesques and architectural elements such as urns on pedestals or the arms of the family were popular. During the age of enlightenment, ideas of ‘taste’ dominated thinking about literature and art as an instinct of right reason and, as a response to an admiration for natural beauty.

Pictorial marquetry composed of pewter, silver, copper, mother of pearl, ebony, horn, tortoiseshell etc., was often in part engraved with coloured foils of red, green and blue used in a backing to the transparent materials.

One type of Marquetry known as seaweed, because of its intricate convoluted patterns, had become very popular at the end of the seventeenth century during the reign in England of William and Mary of Orange. It was only one of the number of techniques employed by Gerrit Jensen, a Fleming by birth, who would prove to be the most proficient and successful exponent of English Marquetry, at least during this time.

From 1689 he became principal supplier to the Royal Wardrobe of writing desks, pier glasses, stands and card tables and in so doing influenced many others.

His name figures constantly in bills and receipts for other highly profiled patrons and he would often inlay walnut with pewter or brass and tortoiseshell, also in the manner of Boulle, to show off his handiwork. 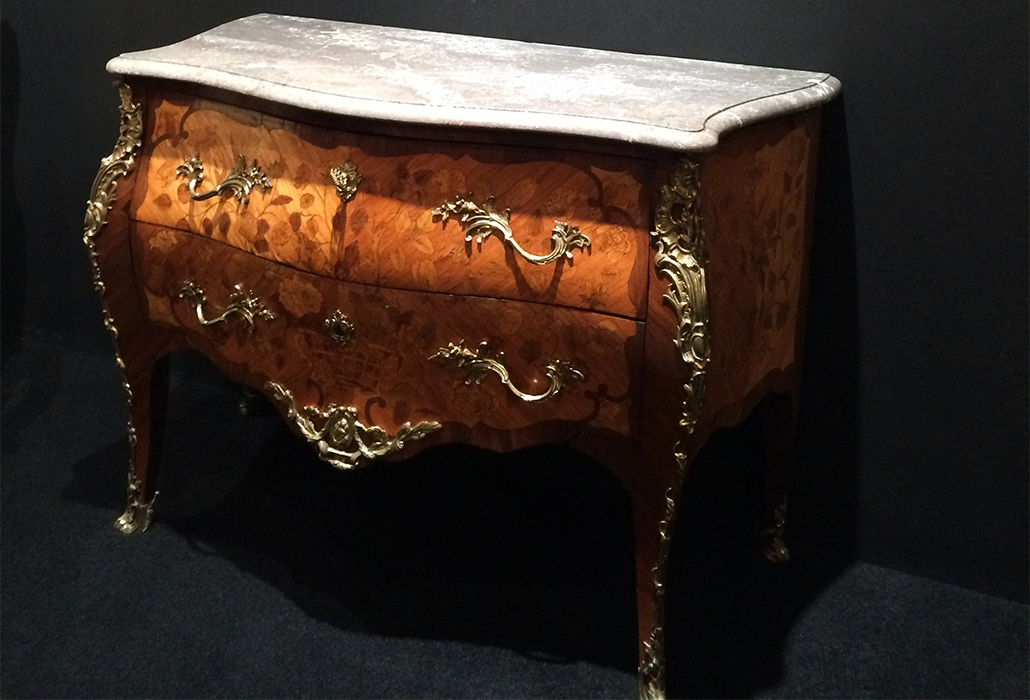 A fine French ormolu-mounted and floral marquetry commode dated 1750 and featuring, amaranth, kingwood and tulipwood set off with ormolu mounts and has a moulded grey Paloma marble top above a pair of drawers.

It has a great provenance, as it once belonged to Adèle, Countess Cadogan, who married the 5th Earl Cadogan in 1911. A two-door cabinet now on display in Mr Roche’s bedroom made by Louis Constantin Le Gaigneur, a French cabinetmaker resident and active in England between 1814-1821, working in the French style of marquetry and inlaid brass originally developed by A.C. Boulle.

This was a period that loved exotic and strongly figured woods such as mahogany, rosewood and zebra wood and Le Gaigneur excelled at crafting furniture.  His shop was called The Buhl Manufactory, and could be found at No. 19 Queen Street, on the east side of the Edgware Road in London. He described himself as a ‘metal bust maker’ so it is thought he may have also made his own gilded bronze mounts. Related to the concept of ‘good taste’ was the notion the intellect of a connoisseur was accompanied by an innate and ‘trustworthy taste’. Taste was seen as inborn, independent of learning and the knowledge one may acquire.

One could know a great deal, be highly enlightened but be known to have ‘bad taste’ Good taste derived from the soul. It became one the most important of all social virtues, for it was a matter of inner well-being as well as outward appearance.

These ideas affected social etiquette; politeness, polished speech and the orderly patterns by which a ‘gentleman’ lived his life.

It not only reflected what style of man he was, but also what he felt about the world in his heart of hearts.

David Roche would love the concept behind this exhibition. They are unending really.

It would definitely suit his idea, by the time you had left his home, you would have found at least one thing you would absolutely adore. 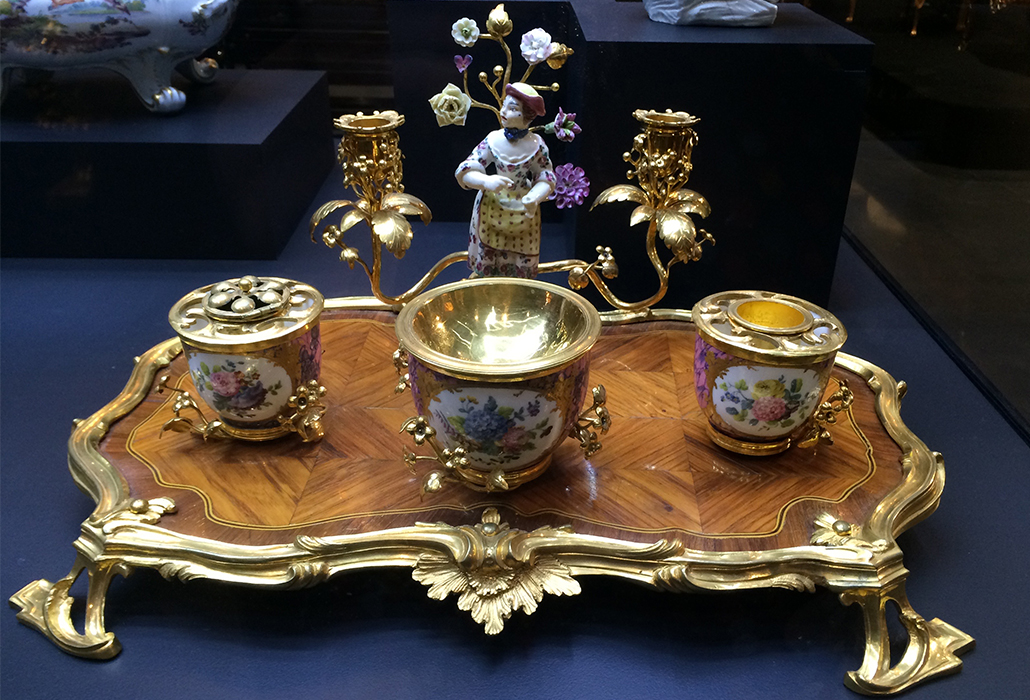 The Australian Print Workshop is supported by the Victorian Government through Arts Victoria. This ‘not-for-profit’ organisation in Fitzroy at Melbourne gains funding from a range of sources, including through their own efforts. Founded in 1981, many of Australia’s leading artists use the workshops to produce high quality prints.  Rick Amor’s…