On view as part of the exhibition at the Powerhouse Museum A Fine Possession: Jewellery and Identity is The Queen’s truly delicious ‘wattle spray’ brooch. It was presented to Her Majesty Queen Elizabeth II by the Australian Government in 1954 when she was on her defining Commonwealth tour. Up until now the brooch that has been part of the display was a replica. Now it’s the real deal. 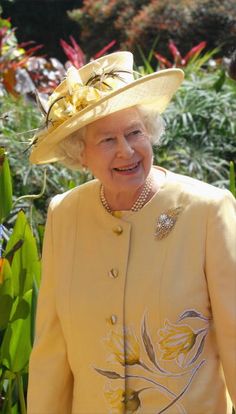 Worn by the Queen often on official engagements, she couldn’t bear to be parted from it for the length of the exhibition (a year) so agreed that it could come down under for a few months to be on show from 16th January to 30th April, 2015 only. Free settlers, who came to Australia following the arrival of the first fleet, appreciated the unique Australian landscape and flora. And the Australian ‘wattle’ gained a great following.

This was in part due to the interest of pioneering Botanist Sir Joseph Banks (1743-1820) when he was at Kew Gardens. The unusually interesting character of Australian plants had become known in England where they were cultivated by enthusiasts. By 1826 the first Australian Royal Horticultural Society was an active body and the wattle a subject for intense study. 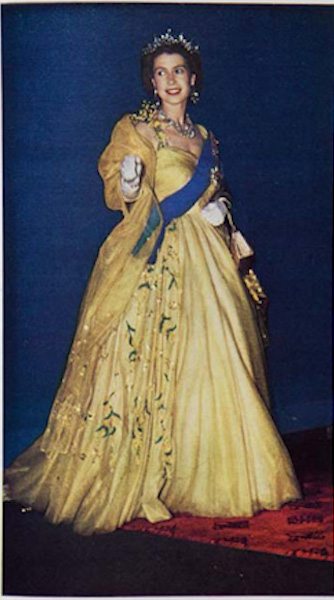 Since English settlement The Golden Wattle ((Acacia pycnantha) has become a unifying symbol for all Australians. It has also come to represent both its people and the land, Australia. Coming from the Mimosaceae plant family it reflects our desire for unity, love and peace and this is celebrated annually on Wattle Day, 1st September. The Queen’s Wattle spray brooch is on show at the Powerhouse Museum, Sydney alongside a display of extraordinary jewellery, including some 70+ pieces loaned by the Anne Schofield Collection from leading antique jewellery dealer Anne Schofield, as well as the neckpiece worn by Australian actress Nicole Kidman in the Oscar-winning film Moulin Rouge, and the stunning Hollywood style brooch worn by actress Cate Blanchett at the Academy Awards 2005.  A Fine Possession: Jewellery and Identity

‘… a wise man will make more opportunities than he finds… the job of the artist is always to deepen the mystery’* Francis Bacon: Five Decades of Art is an exhibition ‘not to be missed’ to be held at its only venue in Australia, the Art Gallery of NSW. It…