At Melbourne each year on the first Tuesday in November the greatest event of the year on the Australian calendar, the Melbourne Cup is quite literally the race that stops the nation.  Since it was first established the now famous horse race has over the years gained iconic status.

While the ‘cup’ itself is a physical trophy presented to the winning owner, it also much more than that, it is a symbol of a whole nation of people and their struggle against all odds to survive in a harsh and sometimes unforgiving wide brown land.

This is the event described in Encyclopaedia Britannica as ‘the greatest all age handicap race in the world’ in which 26 horses, the safety limit for the race, leap out of the barrier together to cover two miles in approximately 3 mins and 20 seconds, while competing to win one of the most famous horse races in the world. The ‘Might and Power’ of thundering hooves
Defines a champion -
Whose courage and tenacity
Is shown to all the nation!
And once a year, that single race
Creates the situation -
Where we share all the nostalgia of
The race that stops the nation*

It is a day of fillies, frocks and flowers when all the hopes, dreams, expectations and aspirations of a great team of people can be either realized or lost; the owners, the trainers, the strappers, the jockeys and all of those, through extension, who are involved in bringing one ‘staying’ horse to the barrier of a classic of the Australian turf with the aim of finishing first.

The Cup has meant a public holiday for Melbourne city since 1877 and this ensures great attendance crowds. American writer Mark Twain said of his visit to the Melbourne Cup in 1895: ‘nowhere in the world have I encountered a festival of people that has such a magnificent appeal to the whole nation. The Cup astonishes me’. It has long been known as a place where controversial ‘events’ happen, such as English model Jean Shrimpton wearing a mini skirt to Derby Day in October 1965. It was truly a scandal.

The Flemington Racecourse at this time of the year is one of the most beautiful sights to behold as the spring flowers peak at their best, coaxed by a whole team of gardeners. The abundance of roses, poppies, pansies, ranunculus, lavender and stocks and the famous green lush lawns make for an attractive setting. The spectators add to this colourful scene, especially in the members’ stand.

The Fashions on the Field contest, which is celebrating its 50th anniversary in 2012, has fashion conscious women and men all clad in fantastic finery competing, clamouring and cramming into celebratory events held in tents that rival those from the ‘field of the cloth of gold’. 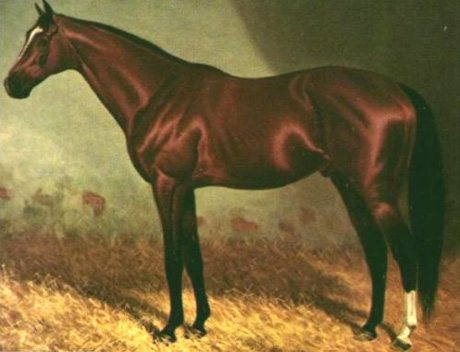 There have been many ‘significant’ moments in the history of the race when its winner captured the public’s imagination, the first being with the first horse ever to win it, Archer, who won it two years in a row, 1861 and 1862.

Then there was Carbine, ‘Old Jack’ as he became affectionately known, who carried the greatest ever-winning weight of 66 kg when he won in 1890. He became a legend in his lifetime racing during the late 1880’s and early 1890’s, and helped to establish the tradition of New Zealand bred horses traveling across the Tasman Sea to take the cup away from the Aussies.

He was a great horse, who’s combined record of documented success as both a racehorse and an international sire of other great racehorses that looms large in the history of thoroughbred racing.

On four occasions Carbine won twice on the same day, not something that owners or trainers would ask of their horses today. By the time of the Great Depression in Australia this great horse race had captured the imagination of the majority of ‘ordinary Australians’ who indulged in a ‘flutter’ to see if they would be able to win the funds that would let them forget, even if only for a moment, the often hum drum nature of their daily lives. It was all about visions of excitement and hopefully realizing a newly found affluence that would allow them to enjoy luxury and riches beyond their wildest dreams.

Along came Phar Lap, the giant horse with the giant heart, literally it weighed twice as much as any other horse’s. With his jockey Jim Pike aboard he galloped his way into the hearts and minds of millions of ‘Aussie battlers’ and the history books as well. When he won the Melbourne Cup 1930 it was after having won 27 races from 30 starts.

The punters all had learned to rely on him as a sure thing and he did not let them down. When he was taken to America to race in 1932 they followed his story ‘over there’ with increasing interest. They were all shocked, and a whole nation wept when he was found dead in his stall in very suspicious circumstances, just before competing in the Agua Caliente Handicap, the world’s richest race at the time.

Tests of his preserved hide, heart and bones were put on display in different places following his death. During the first decade of the 21st century scientists proved conclusively there was ‘arsenic’ consistent with a large single dose present and that he had been poisoned as everyone had suspected at the time, but were unable to prove. No horse has captured their hearts more since Phar Lap than perhaps Makybe Diva, who won three times in 2003, 2004 and 2005 and proved herself one of the cup’s all time greats.

To prepare for the Melbourne Cup jockeys start their day in the dark. They are busy out there galloping horses against the clock in the hours before the dawn when we are still sleeping. They join into the pre-cup madness as the shops all around Melbourne town dress their windows in silks and satins as well as pictures of previous cup winners, their owners, the trainers and the trophies.

But even the fastest of the horses would not finish ahead of the ferocious fashionista types who clad in fantastic finery spend the weeks before preparing and primping so that they can spend the Melbourne Cup carnival competing, clamouring and cramming into celebratory events all over the city.

Skinny self-sacrificing super models parade up and down in city streets and arcades. Pre-cup lunches see ladies of style turning up to find out just what the fashion pundits are saying that they should buy and wear on cup day. The very first race meeting ever in Australia was founded in 1810 at Sydney where Governor Macquarie, he who brought culture to the colonies, planned the event to improve the cultural life of Sydney and its settlers.

The racetrack was a neutral meeting ground for colonists of all classes from military officers to reformed convicts and free settlers. A ‘Subscriber’s Ball’ organised in conjunction with that first meeting was attended, according to the Sydney Gazette on the 18th October 2010, was attended by ‘all the beauty and fashion of the colony.

The Fashions on the Field at The Melbourne Cup really started back in the 1880’s but it only turned into a competition in 1962.

Being Melbourne what anyone wears to the Melbourne Cup at Flemington on that first Tuesday in November all boils down to the vagaries of the weather. Nature in the end can either be kind to all those who have sweated long and hard to prepare the course for the crowds by shining brightly, or otherwise rain down dramatically on everyone’s parade. 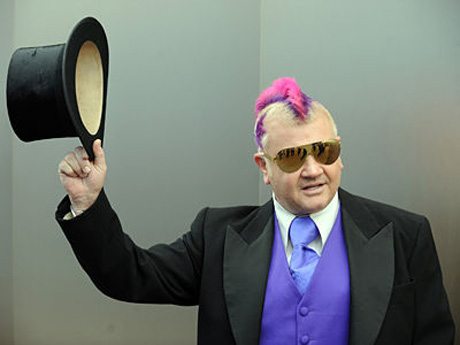 The trainers of the horses, who usually remain silent for the other 364 days of the year go about their life before the cup in the pre dawn hours looking very up to the minute and trendy in traditional tweed attire, their jackets with suede arm patches, skinny ties aping the seventies and a jaunty herringbone hat to boot. This is the time when press parties are all in attendance wanting to prove just how keen they are to get into the action and tip the potential winner.

Then go, they are off and racing once more. As the horses all thunder down the track for the first time you can almost here all those millions of little Aussie battlers, who helped to found our nation on the sheep’s back, singing out ‘good on you mate’.

Then they are coming down the straight and the winner is vying for the lead and everyone is cheering for that grand horse race, the one that stops a nation – The Melbourne Cup.

Emperor Joseph II of Australia loved a singspiel, which gave people of all classes and backgrounds a chance to see themselves on stage and reflect on their life