The Race That Stops The Nation is a poem about Australia’s fascination with the Melbourne Cup. This has been happening ever since a horse named Archer won the first two races in 1861 and 1862. Sydney born writer Vivienne McCredie penned her prose in 1986. It is a piece of poetry for all Australians to know about and enjoy. It was read out on an evening radio program in Sydney run by Kel Richards at the time, and later published.

Copies are held in the State Library of NSW and the National Library of Australia.

Since then its title has gradually become part of contemporary Australian colloquialism, in reference to the Melbourne Cup, a horse race always held on the first Tuesday in November at Melbourne in the state of Victoria.

This annual event is part of the VRC Melbourne Cup Carnival and enables the city of Melbourne to endeavour to outperform its east coast rival Sydney, in both the Spring fashionable and thoroughbred stakes.

So far it seems to be out in front and staying well.

The Race That Stops a Nation by Vivienne McCredie But once a year at Flemington
A horse race stops us all
And we hold our breaths and listen
To the commentator’s call
For never has there been a race
That holds such fascination
Than the race they run at Flemington,
The Race that stops the nation

We Aussies are a funny lot,
The things we hold so dear –
Like Rosewall, Hoad, the Opera House,
A glass of Fosters beer
Let’s not forget the Great White Shark,
And Lillee – in full flight,
The Wallabies, the Kangaroos,
The Harbour Bridge at Night,
Of course it’s something special
When we say the name of ‘DON’,
Our Bradman was the best they’ve seen;
His legend carries on On a Tuesday in November,
The first one to be sure,
As the winner flashes past the post,
You’ll hear the thousands roar.
For never has there been a race
To catch imagination
Than the race that’s run at Flemington
The race that stops the nation!

It’s called “the Cup” – the Melbourne Cup. Beginning naturally
When a horse called Archer walked
Into a place in history.
And since that year of ’61,
We find no explanation
As to why it is this two mile race
is the one that stops the nation For down the years it’s history,
How losers come and go –
And horses who with bursting hearts
Can make the legends grow
The memories of champions
Will always linger on –
Immortalised forever by
The race at Flemington!

Some names are so familiar
It’s easy to recall – Like Rising Fast and Kiwi, and The greatest one of all for Phar Lap is synonymous
With all that’s brave and bold –
And little men can treasure all
The stories that are told. When Phar Lap graced the turf, and won,
We Aussies felt elation –
We loved  him, – so in death, he then
Was mourned by all the nation.
A century has been, and gone,
And still the horses run,
To the cheers and acclamation
Down the straight at Flemington 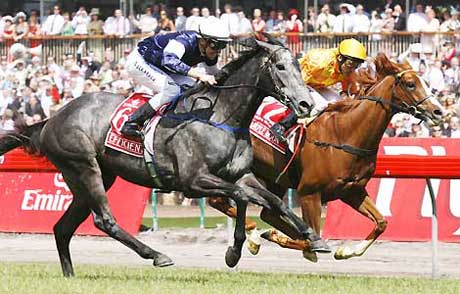 Now o’er the seas, on moors and downs
Hooves pound in expectation,
Through early morning mists that veil
Their great determination.
The best will come to challenge
The antipodean horse
In the gruelling race of two miles –
On the famous Melbourne course.

The ‘Might and Power’ of thundering hooves
Defines a champion –
Whose courage and tenacity
Is shown to all the nation!
And once a year, that single race
Creates the situation –
Where we share all the nostalgia of
The race that stops the nation