Signet ring unknown maker Sapphire intaglio of carved in the Greek world 100 BC – 1BC with an image of a Ptolomaic princess wearing a veil over her head.  Reset as ring 1275-1325 when a veiled woman also symbolised the Virgin Mary – courtesy V & A Museum, London

The growth of intellectual life during the 12th and 13th centuries in Europe culminated in the scholastic philosophy of St. Thomas Aquinas whose numerous writings on religious mysticism and spirituality were very influential. The Middle Ages 1200 – 1500 was a defining time in human history.

Jewellery, especially rings were an important sign of faith in an age when religions, science and magic became intertwined. ‘Gems’, wrote Alexander Neckham (1157 – 1217), ‘are commended by the wondrous power of their virtues, their sparkling light, and the elegance of their beauty. I call them the miracles of nature, grateful gifts, a delight, a study and a reasure.”

During the Middle Ages the giving of a ring was all about betrothal, love or making social connections, especially at New Year when rings were thought to be ideal gifts with greetings for the year ahead engraved on their hoops. 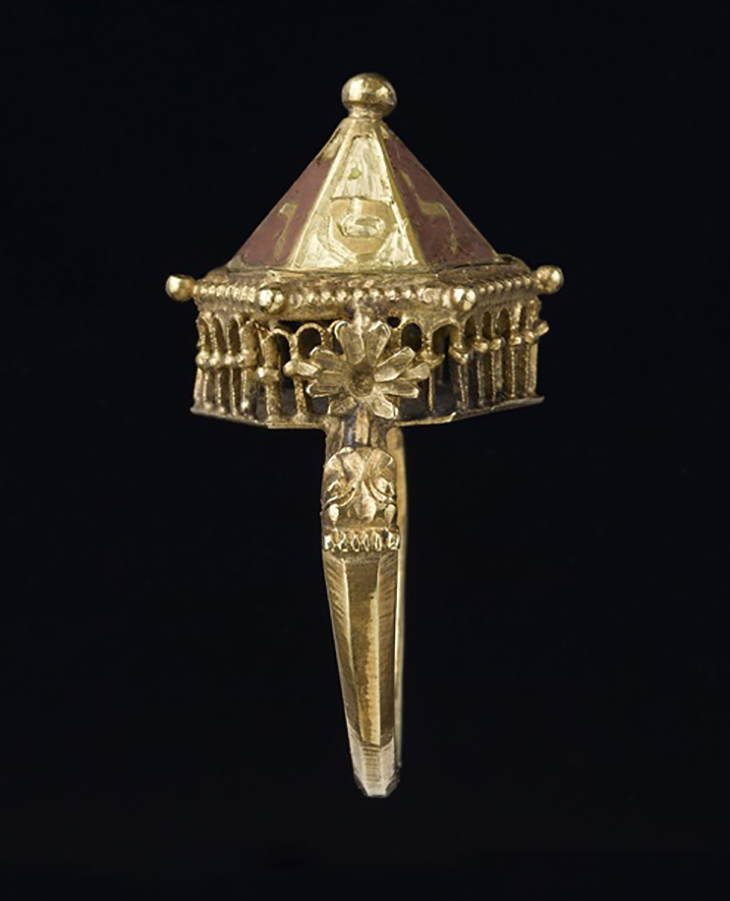 Priest and Theologian a Doctor of the church Thomas Aquinas considered the question whether it was permissible to wear divine words suspended from the neck. He decided that it was only allowed if no evil spirits were invoked and if the legend contained no incomprehensible words. In most cases magic inscriptions on medieval jewels went far beyond the limits of the permissible.

Cardinals, Bishops and Nuns of the church all received rings at their consecrations, as symbolic of binding themselves to God, a practice still in use today. Gemstones at this time were also chosen for their colour and great ‘bling’ quality, with sapphires representing the blue of the sky and rubies, red the colour of passion.

Rings set with sapphires were very popular because of their association with heaven, and many have since been discovered in the graves of bishops.

The incredible sapphire intaglio in this ring was most likely carved in the Greek world during the first century and has been re-set in an open-backed mount somewhere between 1275 – 1325 in Europe. 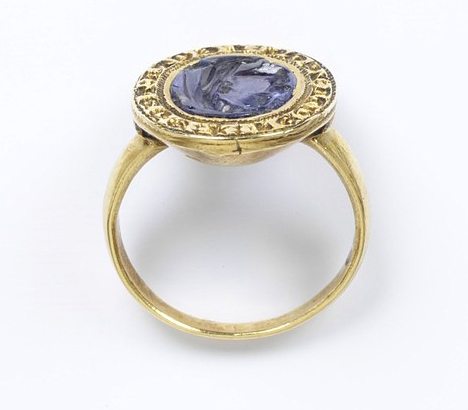 The inscription around the bezel reads: ‘Tecta lege, lecta tege’ translated as ‘Read what is written, hide what is read’ and shows the ring’s use as a personal signet. It was a phrase often quoted on early seals.

Ancient gems were frequently re-set during the Middle Ages for use as personal seals for authenticating letters and legal documents. Roman or Hellenistic images of gods or mythological figures were also re-interpreted in a Christian framework.

The Ptolomaic princess who is engraved on this gem might be being used to symbolise the Virgin Mary, who in ancient texts is often shown with a veil over her head. It was believed to have a medicinal affect or amuletic benefit, by warding off evil. Allowing the gem to touch the skin of the wearer was advantageous because with all the superstition that abounded at this time, direct contact of the stone with the skin was believed to have medicinal and therapeutical benefits. Portraits and Illuminated manuscripts from the late Middle Ages into the early Renaissance period, richly depict women wearing many rings on their hands. Rubies, garnets and spinels were fashionable, all of which were unfaceted gemstones that were polished and set into a cabochon shape.

The ruby ‘shines so greatly in the night,’ declared Bartholomew the Englishman (fl.1250 – 80), ‘that it sends flames into the eyes.’

Jane Beaufort (1379-1440) is depicted with her daughters  wearing an enormous amount of rings.

She is wearing five on her right hand alone. Often rings were also worn on strings around the neck or attached to clothing and hats. 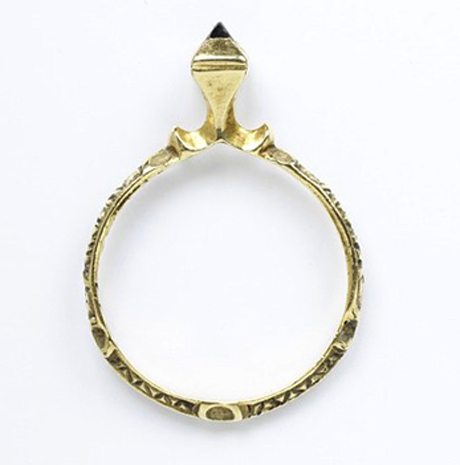 It was around 1400 that the point-cut for the diamond was developed using the natural pyramidal structure of the natural stone.

Ava Maria is an abbreviation of Ave Maria Gracia or ‘Hail Mary, full of Grace’.

Being as strong and durable as it was, the diamond became the perfect stone for a betrothal ring, a never ending circle and symbol of strength for the proposed relationship. Enamelled Gold Ring c1580 set with Cameo of the Greek Gorgon in mythology Medusa, who had winged snakes for hair

Guillaume Durand, a priest in the 13th century had left a description of a diamond saying it was ‘unbreakable and love unquenchable and stronger than death, to be worn on the ring finger, the vein of which comes directly from the heart’ taking the idea directly from Roman authors.

The Renaissance period in Italy was a transforming period for the whole of the western world and a time that the evolution of costume, jewellery and rings in particular, became especially triumphant.

It was a lot to do with rediscovering the ancient Roman past as people rummaged around in the ruins of Rome, foraging for buried treasure.

Goldsmiths took their inspiration from the ancient past of Greece and Rome, copying classical motifs and figures of Gods, Goddesses and heroes from antiquity.

This stunning sixteenth century agate cameo of Medusa, the lady whose looks could turn people to stone, surrounded by all her writing snakes, was set into a gold ring that was also enamelled. She was an evil averting device as well. As Europe emerged out of the Middle Ages and the rebirth of Humanism, or what we know as the Renaissance period in Italian history began. This is a time when Italy was beginning to also look back on its past achievements and also men began searching through the ruins of antiquity in hopes of finding lost treasure.

The Venetian ambassador to England once described Henry VIII’s fingers as one mass of be-jewelled rings. Henry’s many wives, including Catherine Parr, followed the same path.

He revelled in every opportunity to highlight his illustrious person. The Lady in the Veil Cameo, courtesy V & A Museum at London,

His daughter Elizabeth 1 imagined people …‘would be diverted by the glitter of her jewels from noticing the decay of her own personal attractions. She wore rings on her fingers reflecting the love she bore her people.

The cameo technique had also been an important aspect of their heritage, collecting them was revived by the heads of influential families, who wished to once again not only honour their heritage but also elevate their status through national pride.

A Lady in the Veil cameo now in the V & A Museum at London was made c1550 – 1580 of Sardonyx in either Italy or France.  It was cut entirely from the dark upper part of a piece of layered agate, using the white lower layer as a contrasting backdrop. Matt and polished areas suggest textures of flesh, fabric, hair and jewellery.

It is once thought to have been in the gem collection of Thomas Howard, 2nd Earl of Arundel who lost his head for betraying Elizabeth 1 and a portrait of her of her survives in cameo format made c1757-80.

Jewels like this one were important diplomatic and courtly gifts to supporters at home and abroad. They were also often set into rings. Elizabeth believed that her mother Anne Boleyn had been innocent of the charges brought against her that led to her beheading. When she became Queen of England she restored Anne’s legal title as Queen in the parliament posthumously. 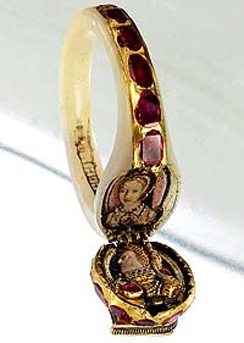 Elizabeth always wore her mother’s ring in which rubies predominated. After the serene blue of the sapphire the regal red of the ruby was highly prized because of its association with passion.

It opened to reveal portraits of herself and her mother. It was a permanent reminder for her of the dire consequences attached to making a wrong move in politics. It also became integral to her style, helping her as she created her own royal style of governance.

Legend has it that she was still wearing the day she died and that it was the ring taken from her finger and carried to Scotland to her successor James 1, so he would know that she had really died.

The Roman authors Aulus Gellius in the 2nd century and Macrobius in the 5th century had believed a vein ran directly from the fourth finger of the right hand so rings worn on that finger affect the heart and it …opened to reveal quotations from the marriage ceremony.

This triple hoop enamelled gold ring dates from 1600 – 1650 is set with a diamond. A ring has no beginning and no end, therefore is the perfect accessory for humans to wear and to represent the enduring qualities of true love. Decorated with symbols of love and quotations from the marriage ceremony, the ring’s inscriptions can only be read when its hoops are opened out.

Now in the V & A Museum at London the three connecting hoops, each have an attached hand or heart that fit together and appear as one

The idea was ‘what God has joined together let no man put asunder’ and rings were inscribed with sentiments such as ‘my beginning and my end’.

To be continued… part three final…

The Ring – From Scarab Beetle to Big Bling, 1