During the closing years of the seventeenth and early years of the eighteenth century cabinetmakers in England and Europe revolutionized furniture design. They were busy exploiting new constructional methods such as dovetailing to join panels almost seamlessly.

The smooth surfaces that resulted were decorated with mouldings and two-dimensional finishes, such as inlay and marquetry.

Throughout the eighteenth century hand craftsmanship, in all phases of the decorative arts in both England and France, reached a high pinnacle of achievement in terms of artistic expression, quality of materials used and unmatched craftsmanship.

Cabinetmakers in England and ébénistes in France produced amazing furniture at this time, which is still today considered by many some of the most beautiful ever made.

Significant pieces were designed and decorated with great attention to detail and their use and function also became a priority.

France’s King Louis XV mistress Madame de Pompadour (1721-1764) had been at the forefront of the Rococo style, which preferred curvaceous lines and asymmetry. However during the last few years of her life there was a change in both attitude and fashionable taste in Europe towards the elegant, refined, and considered more ‘correct’ lines of classical design.

This was a direct result of the excavations that were occurring at Herculaneum and Pompeii from 1738 and 1748 respectively, the houses being excavated confirmed measurements and proportions used in the architecture of ancient times.

They related to the many texts, which had been found in monastery libraries across Europe since the advent of humanism, the Renaissance. It was all about producing architecture whose measurements related to the scale of the human body. 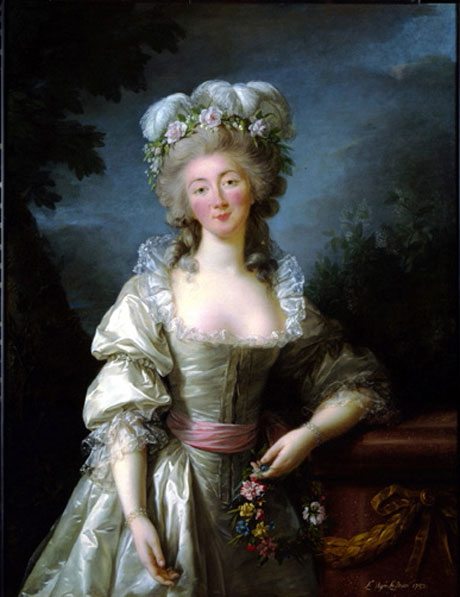 When Mme Pompadour died the neoclassical style was taken up by Madame Du Barry, King Louis XV’s last official mistress, as well as the Austrian Princess Marie Antoinette (1755-93) who had arrived to marry his successor.

Madame du Barry’s perfect little pavilion was designed by the architect Claude Nicolas Ledoux (1736-1806) and built for her in the gardens of the Chateau de Louveciennes in 1771.

Today he considered one of the most daring and extreme exponents of Neoclassicism in France and the boldest innovator of the century.

Its unified and harmonious character made it a landmark and a premier example of the neoclassical style. 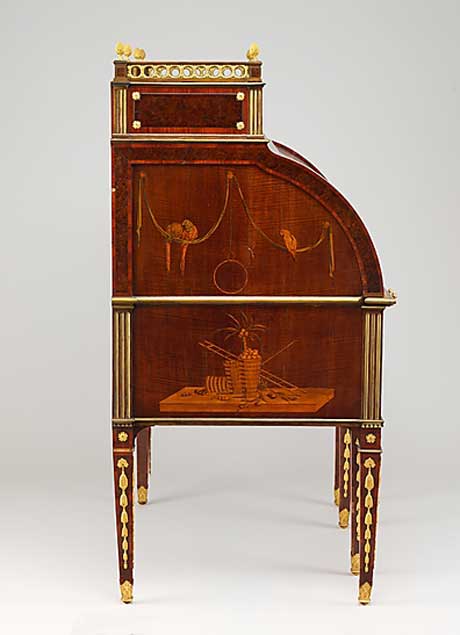 The advanced taste of its decoration and furnishings also in the new classical style impressed all who saw it. Ledoux became the fashionable architect of his day and the furniture makers for it reaped rewards.

Among those were the German based Roentgen family of cabinetmakers.

German cabinetmaker Abraham Roentgen (1711-1793) had grown his reputation based on his well-known mastery of the techniques of marquetry, a method of production originally developed at Antwerp, and other Flemish centres of luxury cabinetmaking, early in the sixteenth century.

Abraham Roentgen was a master cabinetmaker and together with his son David (1743-1807), their firm blazed a trail across 18th-century Continental Europe as their wealthy and distinguished clients commissioned superbly made furniture in the neoclassical style.

Under David Roentgen’s direction as cabinetmaker to Queen Marie-Antoinette (1755 – 1793), the family workshop at Neuwied (near Cologne), became perhaps the most-successful cabinetmaking firm of the eighteenth century. 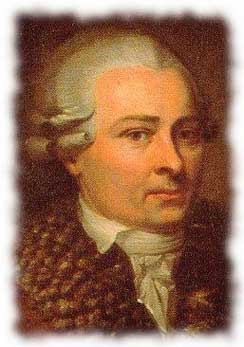 Like magic, they would suddenly fling open to reveal several hidden drawers at the turn of a single key.

These playful and perfectly executed inventions became a favoured status symbol throughout Europe.

The Roentgen families fine pieces of case and seat furniture were sometimes decorated in the manner of Chinoiserie, a European evocation of Chinese motifs, or with fashionable flowers, classical scrolls, classical urns and sinuous foliate forms.

David Roentgen became the most famous cabinetmaker in his family and renowned for his very refined marquetry techniques learned from his father.

Unlike most makers of the time he did not use hot sand to shade wood or engraving tools to add fine detail to his designs: every detail, including shadows and fine shading, was carried out in different coloured timbers.

Following his father as head of the Neuwied workshop in 1772, David Roentgen strove to broaden their clientele. He began his career by continuing and developing the curvaceous Rococo furniture his father had introduced, which was sometimes decorated with rich carvings.

His “English” style of cabinetwork was based on elements dating from the early years of King George III and just occasionally influenced by the renowned English furniture designer and manufacturer Thomas Chippendale.

Both national types are frequently decorated with rich inlay of outstanding charm and elegance composed of a variety of woods, some tinted and made to form figural and floral compositions.

The delightful Chinoiserie scenes are possibly after designs by Januarius Zick (German, Munich before 1730–1797 Ehrenbreitstein). 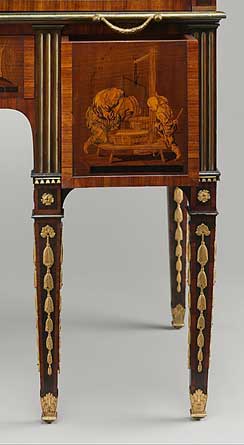 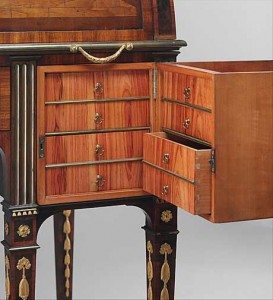 David Roentgen’s ambition brought him first to Hamburg and ultimately to Paris (1774), where in 1779 he was spectacularly successful in selling his finest furniture to King Louis XVI of France for £3,300 to £4,000, an unprecedented sum of money for the time.

Although Roentgen maintained his workshop at Neuwied, Germany, where this desk was made between 1776 and 1778, his French clientele became so important that he opened an outlet at Paris.

This made it possible for him to keep at Paris a stock of the furniture he manufactured at Neuwied. The stunning Chinoiserie marquetry decorated rolltop desk also in The Met New York collection demonstrates the inventive and innovative talents of its designer and maker.

The scenes are truly delightful and he has produced a painterly effect, one that Roentgen alone attained using minescule pieces of naturally colored exotic woods.

The mechanical ingenuity of the firm is exemplified by the workings of the lower section of the desk: when the key of the lower drawer is turned to the right, the side drawers spring open; if a button is pressed on the underside of these drawers, each swings aside to reveal three other drawers.

Roentgen abandoned his earlier styles between 1775 and 1780 in favour of the more rigid and what were considered more correct classical forms. He also contrasted the rich figure of mahogany with superb bronze appliqués and mounts.

His workshop indulged in its mechanical devices, a characteristic flair begun by his father. Magically drawers and mirrors appeared and disappeared by pressing on hidden releases; one of his team of workers, Peter Kinzing was responsible for inventing many of these gadgets and for also providing the workshop with its clockworks for superbly made clock cases.

The Empress was captivated by his Apollo Desk (1783-84), which depicted her favorite dog as a gilded mount, and which David had decided to produce on pure speculation.

After Catherine the Great paid a huge sum for the piece, Russian nobility hurried to catch up with its sovereign, ordering examples of “Neuwied Furniture” by the dozens.  King Frederick William II of Prussia also became  his client.

Abraham and David Roentgen’s story is a tale of international success, fame, luxury, and high honor. In David’s case however, it is also the tragedy of a deeply pious man.

He had struggled to balance his ambitions and his glorious achievements with the regulations of his religious community, the Moravian brotherhood. At the pinnacle of David’s career, the workshop had employed more than 130 specialists and the annual production amounted to that of the famous Meissen porcelain factory.

His fortune shifted dramatically with the progress of the French Revolution, as Europe’s nobility struggled to stay afloat, and the market for luxurious furnishings collapsed.

When in 1795 the French Revolutionary armies threatened to cross the Rhine, Roentgen evacuated his establishment and moved his stock farther inland.

Unfortunately, he lost everything from his Parisian salon and in the Neuwied workshop, both of which were sacked by Republican troops. He was crushed. Despite his appointment as court furnisher to the King of Prussia, he never really succeeded in starting a production workshop again.

His former apprentices, whom he had mentored to establish cabinetmaking workshops in the German cities of Berlin (David Hacker) and Brunswick (Christian Härder) like Weisweiler went on to be very successful.

Many of the works in an exhibition entitled Extravagant Inventions at The Met New York in 2012 showcases the Roentgen family cabinetmakers furniture. It had been lad lent from distinguished international museums and royal collections. 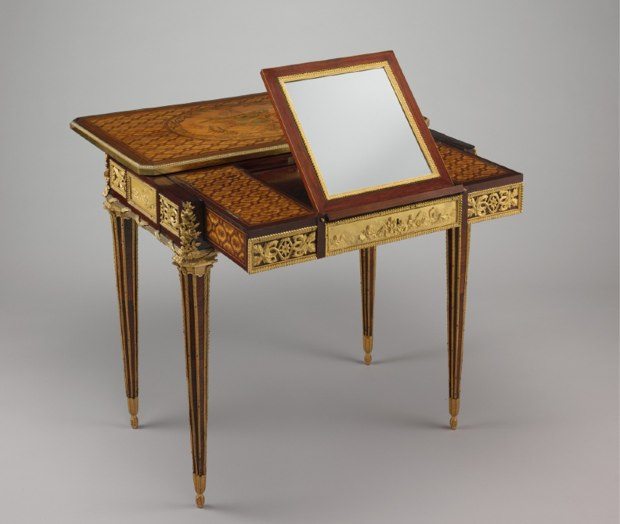 Six pieces from the Metropolitan Museum’s own collection of Roentgen furniture were featured, in addition to two on long-term loan to the Museum. they were a writing desk (ca. 1758-62) designed by Abraham Roentgen considered to be one of the finest creations of his workshop; a spectacular Automaton of Queen Marie Antoinette (1784), a likeness of the queen at a clavichord that still functions and will be played at select times during the exhibition; and six intriguing objects from the Berlin Kunstgewerbe Museum that have never before traveled, most notably a mechanical Secretary Cabinet (1779) made for King Friedrich Wilhelm II of Prussia that is one of the most complex pieces of royal furniture ever produced.

The most complicated mechanical devices in the exhibition were illustrated through virtual video animations.  Additionally, working drawings and portraits of the cabinetmakers, their family, and important patrons—as well as a series of documents owned by the Metropolitan Museum that originated from the Roentgen estate— underlined the long-overlooked significance and legacy of the Roentgens as Europe’s principal cabinetmakers of the ancien régime.

They produced some of the most outstanding furniture of their age.

The City of Brisbane is named for Major-General Sir Thomas Makdougall Brisbane (1773-1860) astronomer, soldier and Governor of New South Wales.