A popular type of painting during the sixteenth century in northern Europe featured figures wearing fifteenth-century costume and ugly features. Quinten Massys (1465/6-1530) and Marinus van Reymerswaele (c.1490 – 95-c.1567) were two artists known to have produced portraits like this. Scholars suggest this amazing image was most likely by a talented follower of van Reymerswaele. Whoever the artist really was, he portrays two men with their faces twisted and contorted in concentration and greed brilliantly. 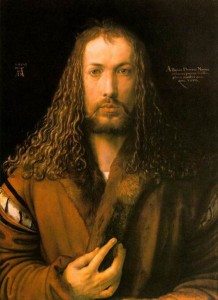 The Northern Renaissance: Dürer to Holbein exhibition brings together sensational paintings, drawings, prints, manuscripts, printed books, sculpture, tapestries and armour. Among the highlights are works on paper by three German artists the painter and engraver Albrecht Dürer (1471 – 1528), painter and printmaker Lucas Cranach the Elder, and preparatory drawings by Hans Holbein the Younger (1497-1543), which will be displayed alongside his finished oil portraits. This work is part of the show and has two figures traditionally known as the ‘Misers’, although they are most likely tax collectors, as indeed were monarchs at the time.

The underlying moral of the picture is that it is issuing a warning against greed, because life is short, which symbolized by the flame of the candle, and will soon burn out.

Their wealth is suggested by expensive, although dated for the time, clothing. The exchange rates in the ledger are written in French, giving curators valuable clues to the dating of the picture, as the rates listed first came into use on 11 July 1548 and were superseded on 16 December 1551. The use of the French language could also indicate that it was painted for a French patron, or that the artist lived in a French-speaking area of the Netherlands. The table is littered with coins being evaluated according to the latest exchange rates. His subject Derich Born was an arms merchant who supplied Henry VIII’s armourer for a time.

Holbein painted altogether seven portraits of merchants, that survive and it has many subtle references to his success and wealth. Black was a colour associated with gentleman, and his expensive black fur-lined gown covers a very expensive satin doublet. The inscription on the stone ledge suggests that the portrait appears to be so lifelike that the viewer might doubt whether it is painted, or is in fact the real living person. A compliment to Holbein’s skills it reads: ‘if you added a voice, this would be Derich his very self. You would be in doubt whether the painter or his father made him. Der Born aged 23, the year 1533′.

The many wonders on display for these three shows are chosen from the incredible choice of that makes up the Royal Collection. A theme is chosen, the works curated and the display mounted with both impeccable style and thoughtful consideration.

There is no doubt the collection houses some of the greatest treasures in all art and The Royal Collection Trust has an incredibly important and formidable job, taking responsibility for their display, conservation and maintenance. The Northern Renaissance was the counterpart to the Italian Renaissance and by the first decade of the 16th century Albrecht Dürer was a spokesman for northern civilisation, one in which the impetus of the Renaissance faltered and was nearly lost.

Dürer, during this time of re-birth’ was deeply engaged in exploring the power of the human psyche.

He gained the reputation of being the artist of ‘everyman’ illustrating books for numerous printing presses and selling individual prints on sheets of paper, which even the average person could purchase. His theoretical treatises on perspective, architecture and human anatomy as well as his natural history studies rivalled those of the best scholars of Europe.

He affirmed his creator by crafting his own image in the likeness of Christ, the outward vanity of a social man in the ascendancy one that has always been controversial. This happened at a time when the plant world was introduced to exotic oriental bulbs and the science of botany broke away from medicine, to which it had long been subordinate.

Modern scientific methods of perfecting the examination of the physical world led to inventions – from telescopes to microscopes – that would improve and enhance man’s sight.

Only ten of Durer’s studies of plants survive.

He depicted the plants exactly as he saw them growing in the field, and his observations would have a lasting influence on the rendering of flowers in art well into the seventeenth century. The Queen: 60 Photographs for 60 Years will project an image of Her Majesty, one familiar to many people around the world. Some are spontaneously captured, on holiday or on official occasions and have been especially selected to present a portrait of her reign through that of a fleeting moment in time.

It’s being held in the Palace of Holyroodhouse, which has had a turbulent history since the 12th century. The tales told of the land of the brave have always spurred young men on to make romantic gestures and to complete dashing deeds.

Today members of the various clans of Scotland, scattered all over the world, communicate with each other, meet together, learn from and help each other, search for their identity.  From time to time they gather together to celebrate a proud and dramatic history. The tartan, plaid and kilts they wear, the clans and customs they celebrate have a rich heritage dating back to ancient times. It was in Holyrood Park on 25th and 26th July 2009 125 Clans came together in a great Gathering to celebrate Scottish Culture.

The Queen: Portraits of a Monarch is presented as a record of the Queen’s personal appearance during her lifetime, in a genre that has long been regarded as one of the most successful and enduring original aspects of ancient Roman art. Today we would have no difficulty at all recognizing Julius Caesar or Augustus from their surviving portraits, just as much as we would be likely to know the image of Jesus Christ and The Queen.

Leonardo da Vinci was responsible for introducing psychological portraiture. He wanted to paint the ‘motions of the mind’, especially sadness a mood artists rarely depicted.

After Leonardo painting was never the same and his influence spread everywhere for centuries, some would say it is ongoing. What is the test of a great portrait? Is it not empathy, the power of the artist to enter into the sitter’s emotions and then convey these feelings to another – to make him also experience empathy? You will have to see for yourself.

The show will include the four colourful screen-print portraits completed by the Pop Art Prince Andy Warhol, which were only recently acquired by The Queen. Over her sixty-year reign formal portraits have been commissioned from a diverse range of artists and this show will highlight views of the monarch through individuals such as Dorothy Wilding, Pietro Annigoni, Cecil Beaton, Lucian Freud, Rankin and Annie Leibovitz.