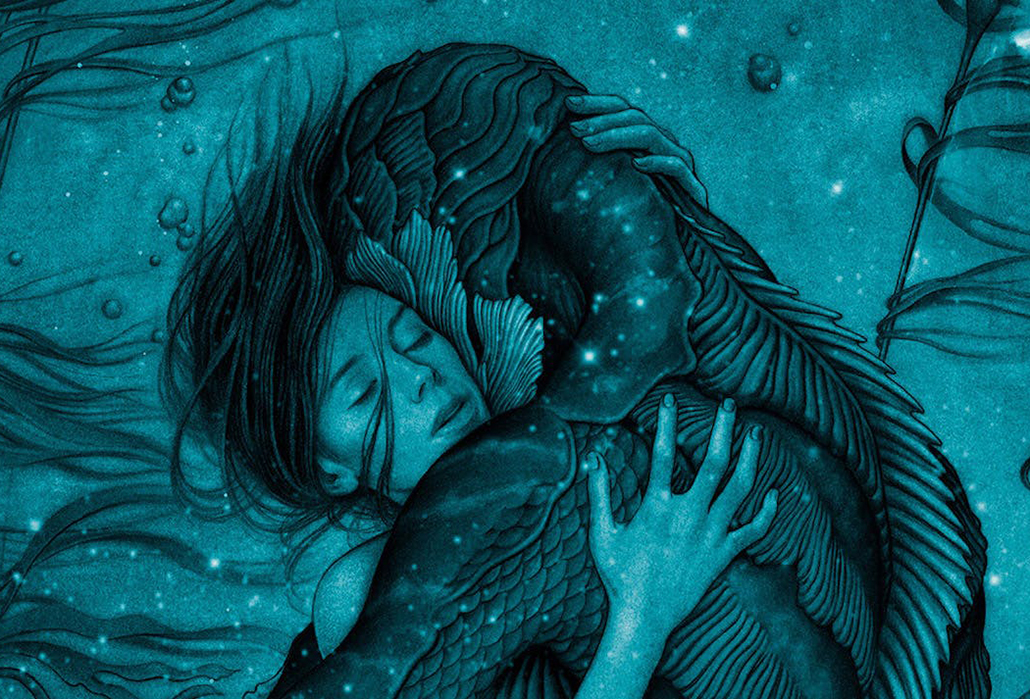 Hold me close and hold me fast, it is all about the magic spell you cast, this little life*…, which can be seen in happy hues of colour, especially in the case of fabulous fantasy film The Shape of Water. The colour just may turn out to be gold, one not highlighted in the movie. 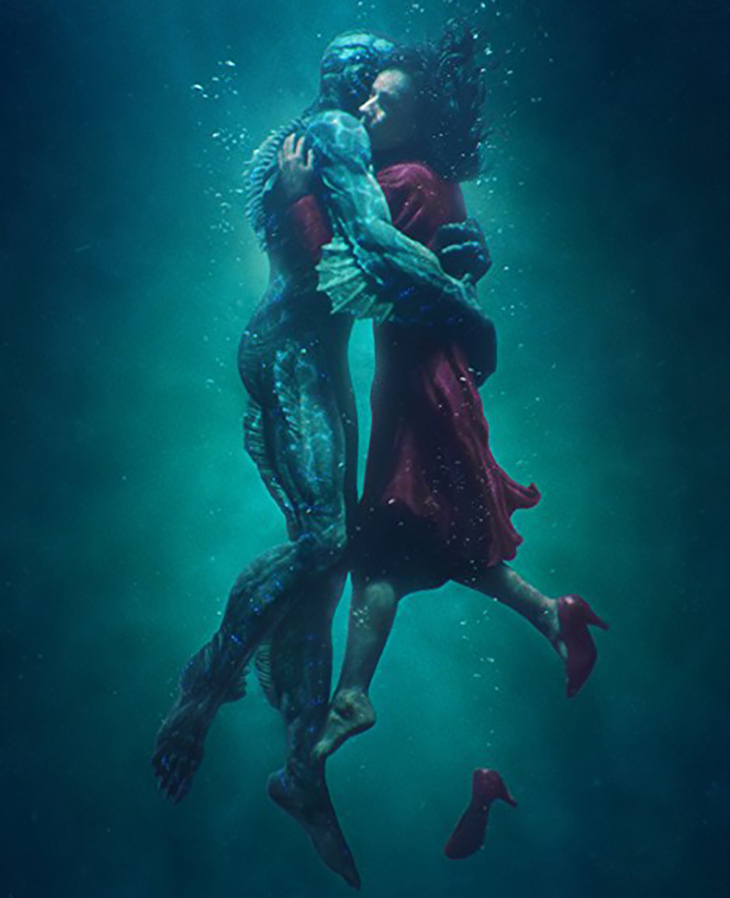 Director, Storyteller and co-Scriptwriter Guillermo del Toro has brought his transcendent unique creative and sensuous imagination to a pinnacle of gentle beauty with this amazing work, a very special mix of both the strange and the familiar it captivates from the first frame to the last.

He brings his fabulous romantic fantasy to the screen, illuminating it with the perhaps the best work of their two careers to date, his main magical actors Sally Hawkins (Elise Esposito) and Doug Jones (Amphibian Man).

It’s easy to tell they earnestly believe as passionately as del Toro does, in the story they are telling, buying into the film’s achingly beautiful promise that the world can be a better place than it seems, but only if you are prepared to stand up for what it is you believe in.

I believe it is fair to say that’s why the film so gloriously succeeds. 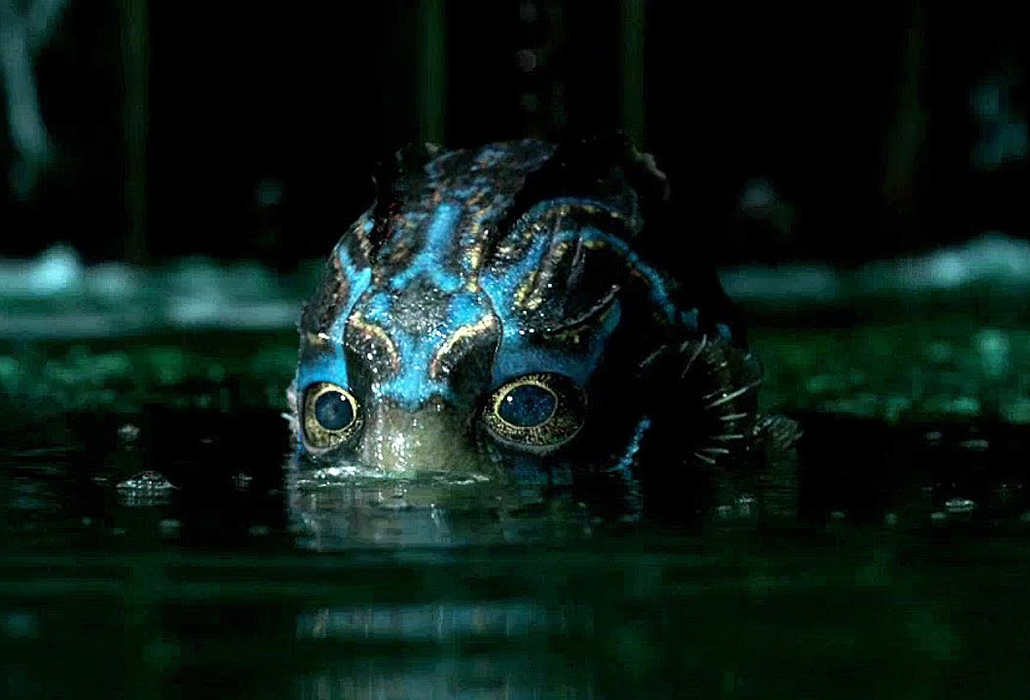 The Shape of Water has been nominated thirteen (13) times for the Academy Awards in Hollywood, to be presented at the Dolby Theatre at the Hollywood & Highland Center, Sunday, March 4, 2018, including Best Picture. 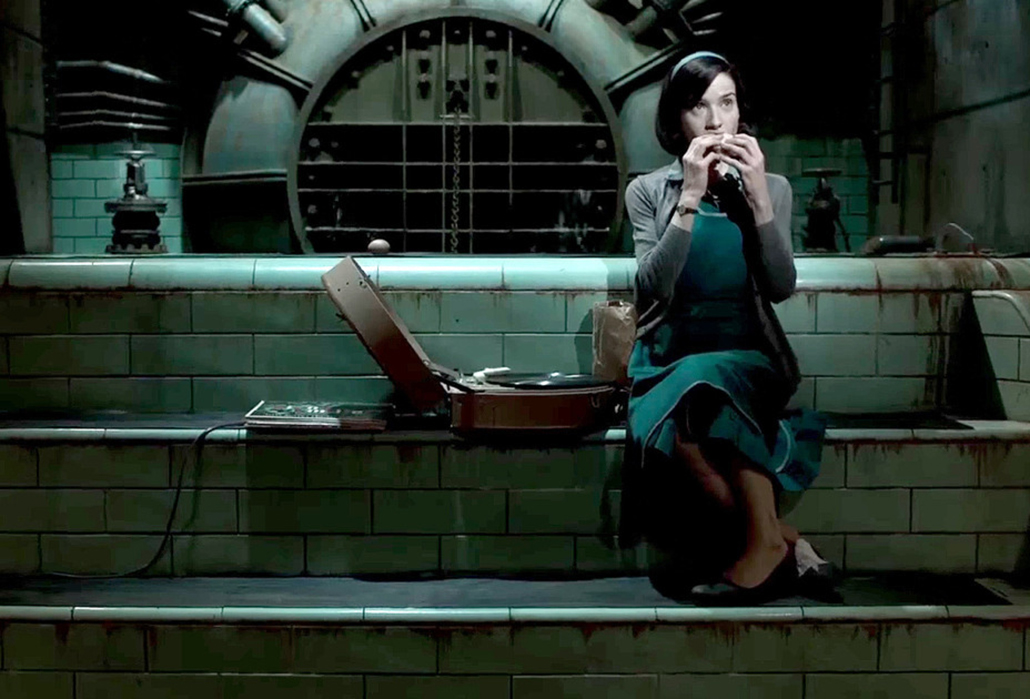 Don’t Read Any More If You Don’t Want Some Spoilers. 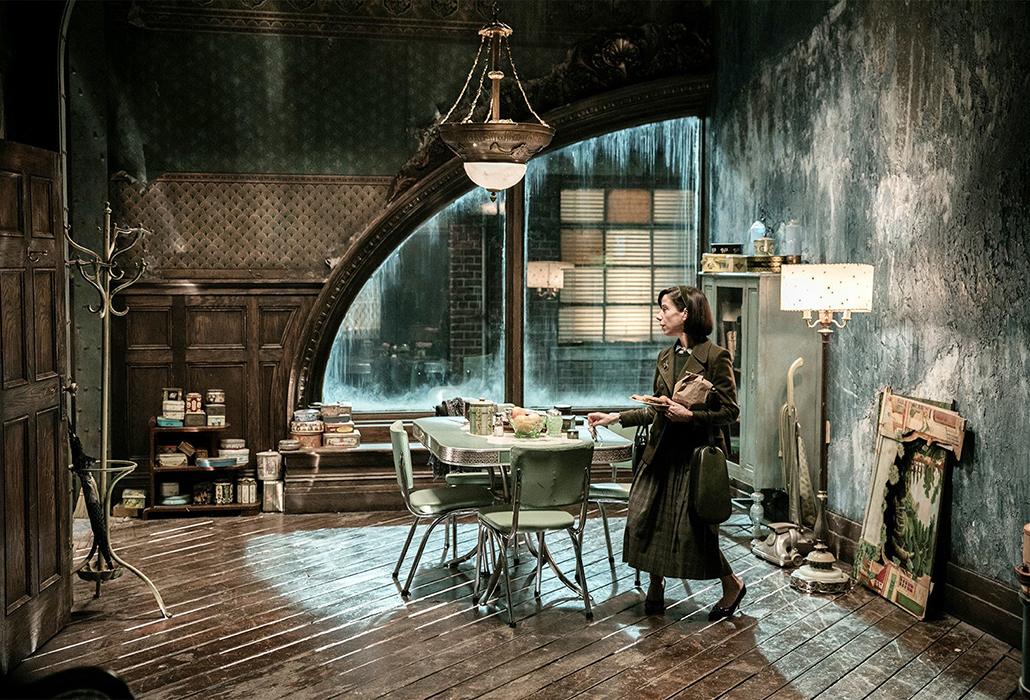 The Shape of Water combines romantic sensibility with sincerity and sweet kindness as a way of combating the darker reaches of one man’s soul. The storyline is right out there in terms of imagination, and it is all so convincing; you will beg to discover it really is true.

The scenes are highlighted by the director’s noticeable attention to detail, which were particularly evident to me (I am an old interior designer after all) in the images and sets created with the home furnishing and appliances available in 1960’s America where the story is set. 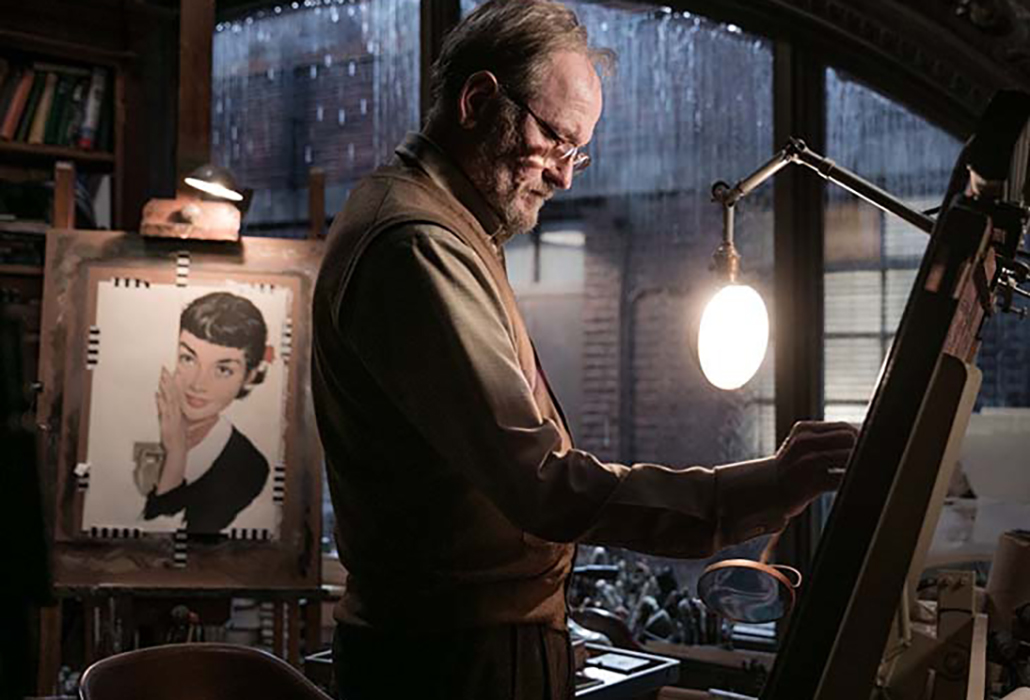 This also introduces us to Giles (Richard Jenkins) who lives right next door to his best friend and neighbour Elisa Esposito (Sally Hawkins), who is unable to speak. He has learned how to sign so he can converse with her.  Their apartments are right above the ‘Orpheum’ Cinema.

A former advertising man, during the day, Giles keeps busy meticulously producing hand painted ideas for campaigns for his old firm that has basically let him go, and he cannot let go.

He’s in an age when other technologies are taking over. He has become redundant and is struggling to earn any money, as he finds himself unable to change at this time in history, when there was literally no help for people who needed to fashion a new career in advanced age. 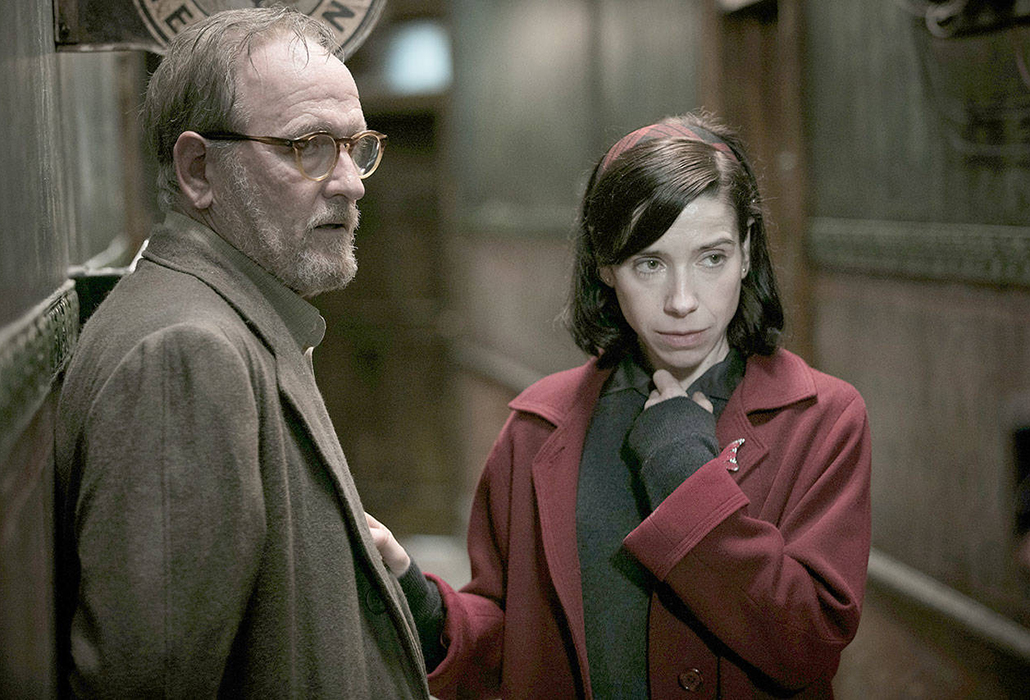 Best friends, Elisa and Giles support each other and she helps keep him alive by feeding him something solid to eat at the end of each day before she leaves for her work as a cleaner. 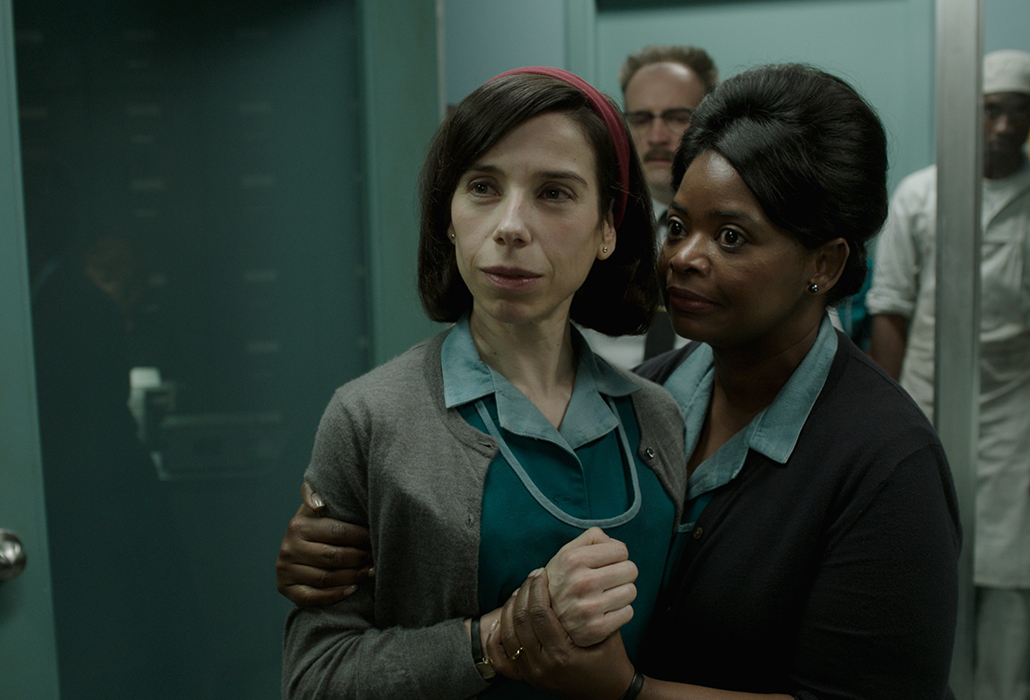 She and her best friend Zelda Fuller (Octavia Spencer) also look to each others welfare. Elisa is always late each day, with Zelda usually saving her a place in the queue to punch on and punch off on time. If she doesn’t show she does it for her.

Surprisingly one night while they are cleaning the floors in one of the research rooms, a special delivery arrives. Curious to find out more, Elisa quietly looks into the huge water filled canister to find out what it contains.

Suddenly she sees a webbed hand belonging to a shape moving about in the water and it only peaks her curiosity more. 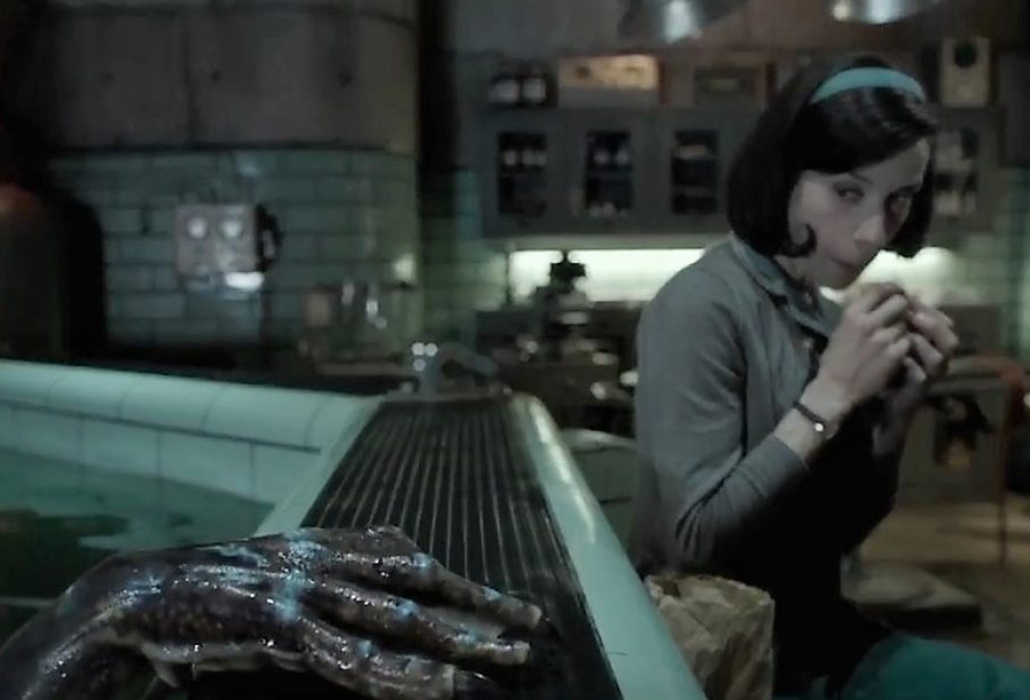 On one of the following nights, Elisa coaxes the creature with the large eyes, strong jawline and superb athletic body. to reveal himself to her by gently offering him a boiled egg, teaching him how to sign its name.

He’s fascinated with his new companion and uncurls himself out of the water to stand looking down on her from above. 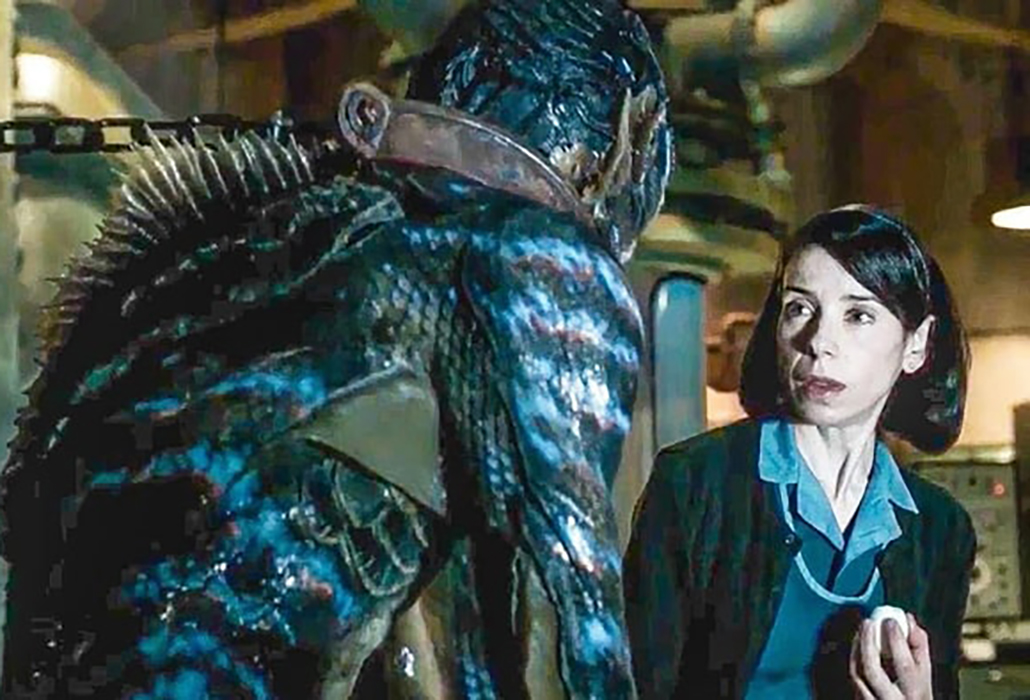 Thrilled, Elisa becomes Amphibian Man’s eager teacher and friend every night, as he responds both to her kindness and her gentle soul.

Unthreatened in any way, Elisa brings in her record player so she can play music for him, finding him a quick study; understanding and learning quickly. He’s certainly a creature with human sex appeal… he has such luscious lips. 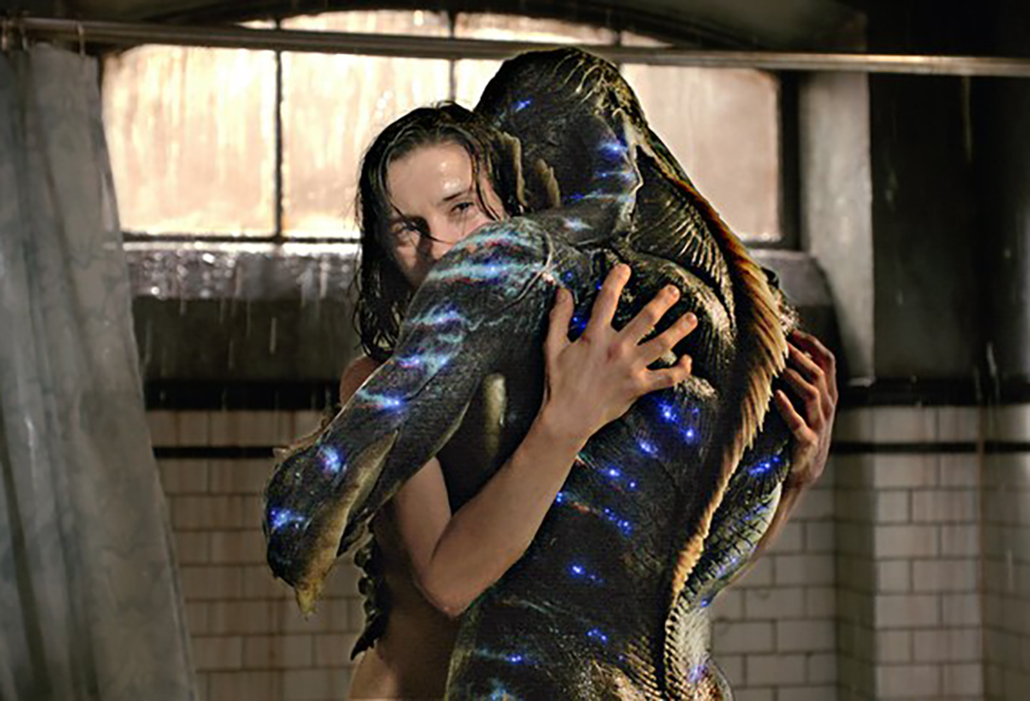 Believed to be a ‘god’ by those living deep in the Amazon Jungle from where he has been taken from the mighty river, such is the power of expression and the truly sublime movement lovingly presented by actor Doug Jones as Amphibian Man, you will find yourself inwardly hoping he is truly real.

The costume is amazingly convincing, but it is his ability to inhabit it and to convince us of his complete other worldliness, without speaking a word, that is so very impressive.

What a wonder the ‘asset’, as he’s referred to by those in the government research lab where he’s kept in a tank and subjected to tests and tortures in the name of science and national security, turns out to be. 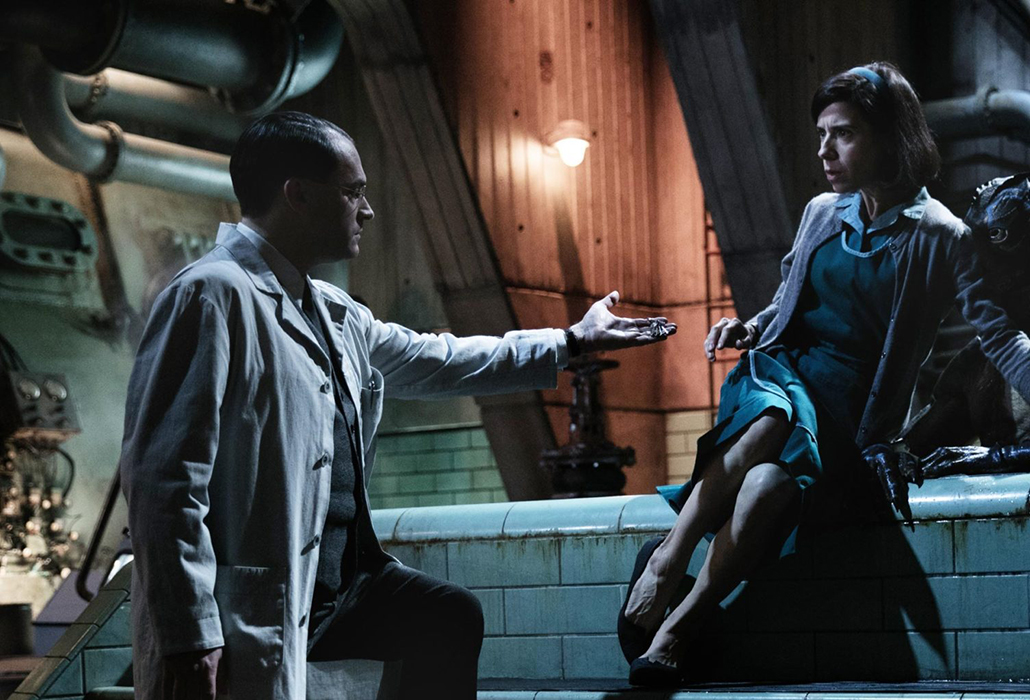 The Scientist (Michael Stuhlbarg) in charge of the project in government ranks, believes the ‘asset’ may fulfil a purpose – that of taking the place of a man in early space travel. That is, if they can learn how to communicate with him. He also accidently becomes aware of what happens at night, watching Elisa silently from the shadows.

However, if the creatures’ morally bankrupt overbearing security guard Richard Strickland (Michael Shannon) has anything to do with it, learning to converse with this abomination is precisely what won’t happen. He thinks Amphibian Man should be killed and cut up to for science to study.

Strickland likes to torture and torment his victim Amphibian Man, as it fulfils his own psychopathic delusions of grandeur and ideas of control. 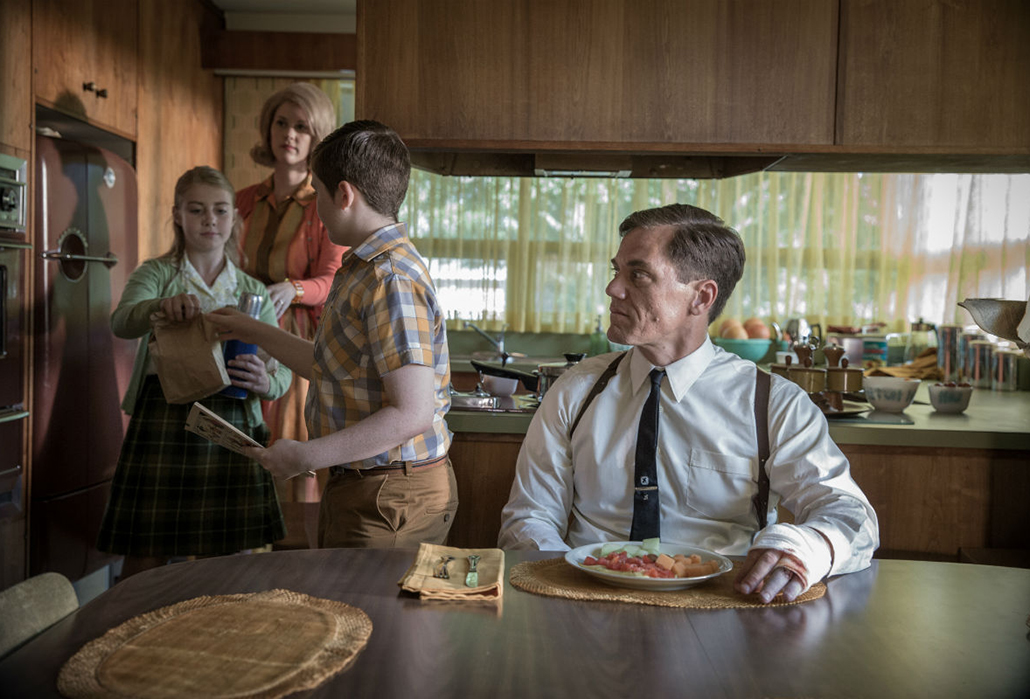 He also has a motive; he wants to move to greener pastures with his family.

However, little does he realize, he is about to be outsmarted by the night-time cleaners, whom he disparagingly understands and treats as inferiors.

Elisa, we learn, was found as a small child with deep wounds on her neck beside a South American river, rendering her silent, although she does hear and understand what people are saying.

The scars are still there on the surface of her neck, but more importantly, still in her mind, which is one reason why she has so much empathy for the captive. 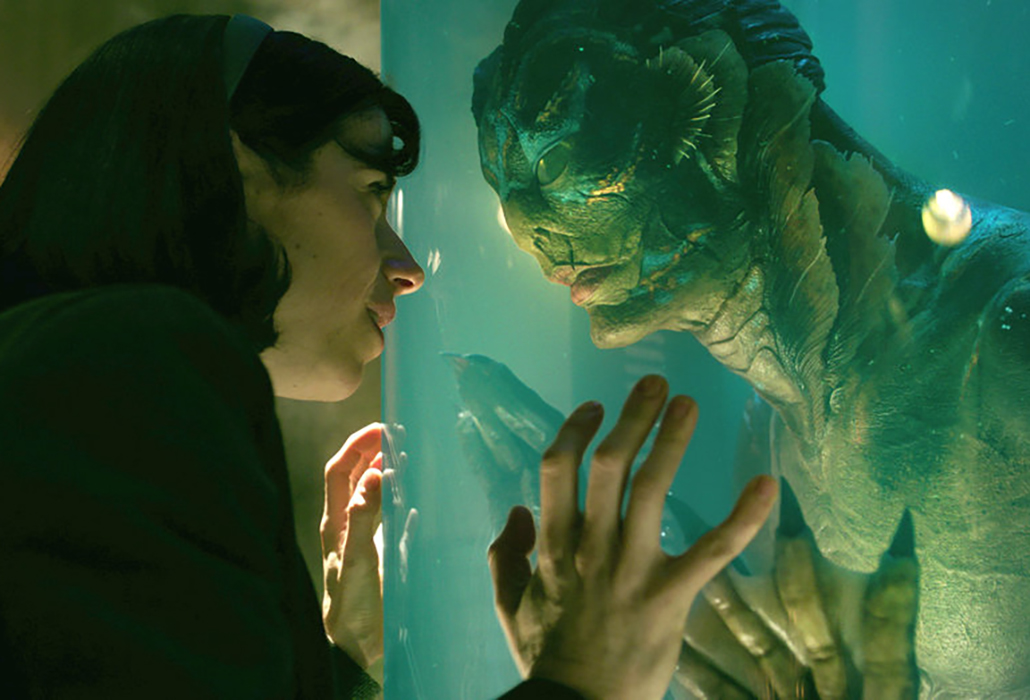 The creature becomes the first person she believes, who doesn’t mind her affliction; seeing her for who she really is deep down in her heart and soul.

They fall in love. When you kiss me heaven sighs – And though I close my eyes – I see…*

Then one night she is dismayed to see blood pouring from under the door of the laboratory, which she and Zelda are summoned to clean up, witnessing the creature chained and restricted as Jenkins prods him endlessly with an electric cattle prod, causing horrific injuries.

She decides somehow and in some way, she must rescue her gentle giant. Sharing her thoughts with dear Giles, who is struggling also to believe the story she’s telling him about an Amphibian man in the first place, she seeks his help. 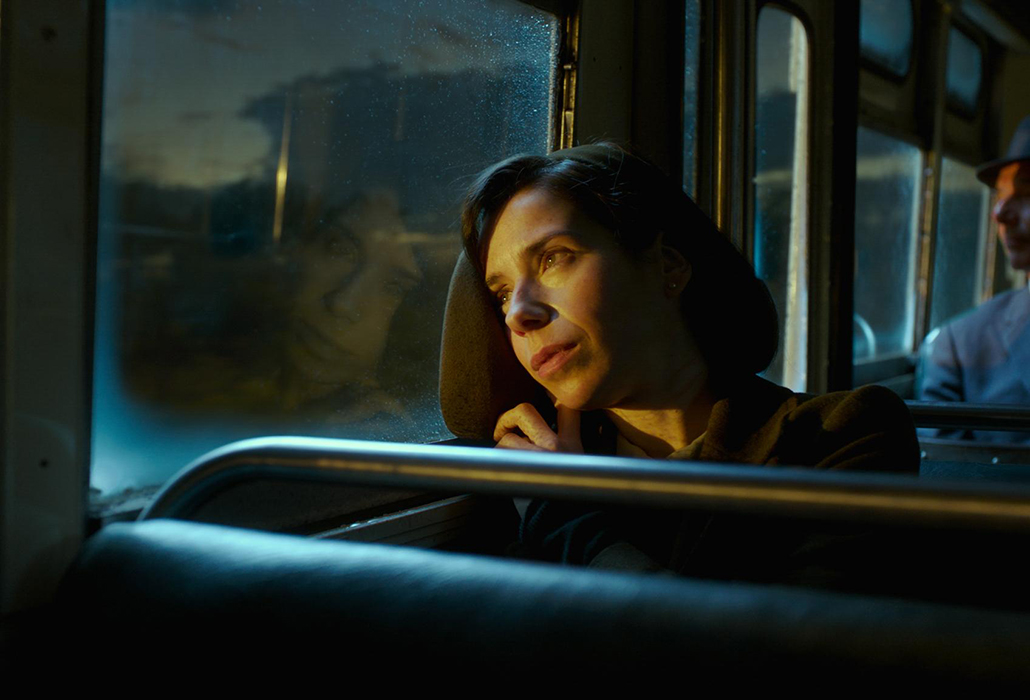 He tells her to leave it alone, that they are only human and besides he’s scared out of his wits, he can’t possibly see how they could get away with it.

But as she points out to him, if they don’t try, then they are indeed less than human. It is a moral dilemma and she is glad when he decides to help her work out a plan with him as getaway driver. 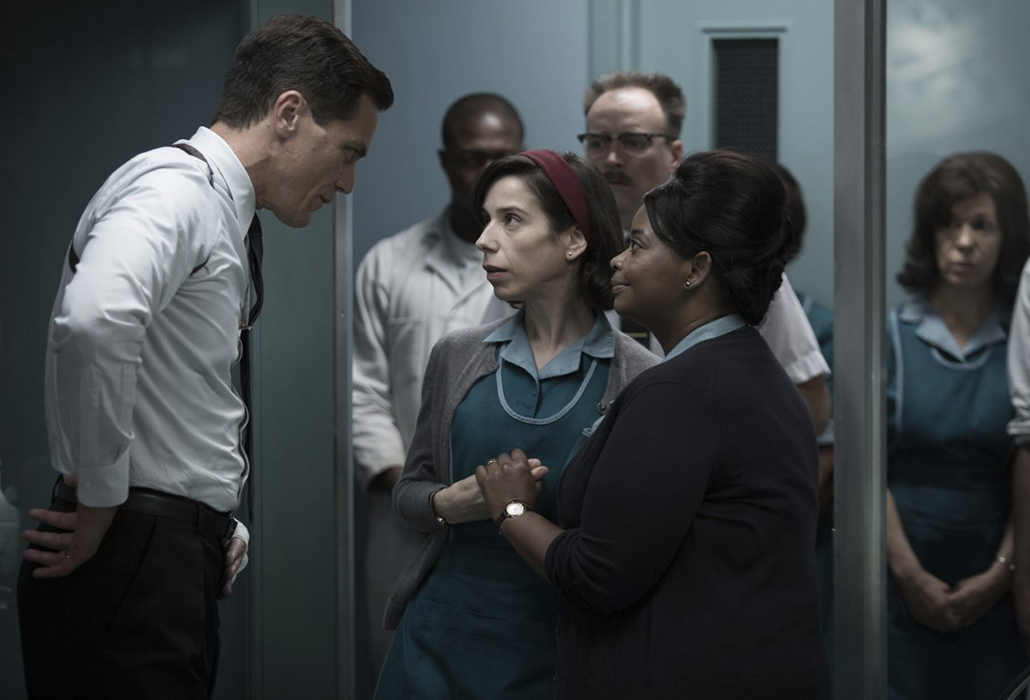 Their carefully worked out plan is nearly foiled however by the unknowing Zelda, who cannot condone ‘theft’.

She gives in to help her friend take the captive she is so passionate about, first to a place of safety her home, where she and Giles further plan to release him back into the ocean when the annual rains fill the nearby canal in a few days time.

In the meantime, anything can and does happen. 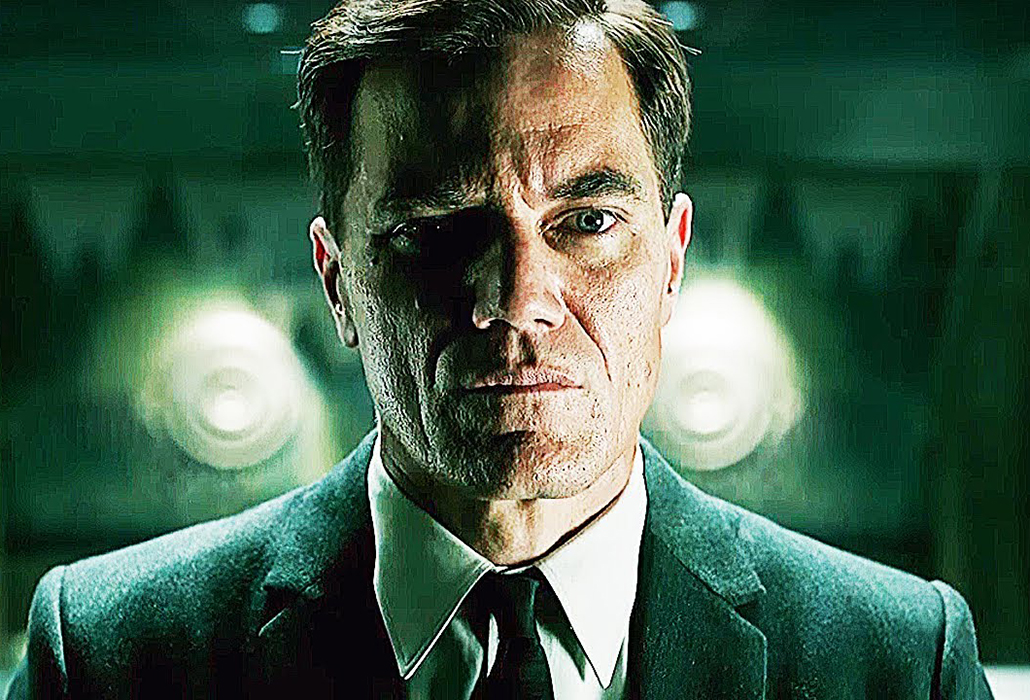 Throughout the movie while all the action is going down there are other relevant stories about our characters being told simultaneously, which both throw light on role they have to play and their impact on the end result for the two lovers.

This is one extraordinary movie about a princess without a voice and her very unusual Prince – equal parts fairy tale, Cold War spy thriller combined with a defining and unorthodox romance. 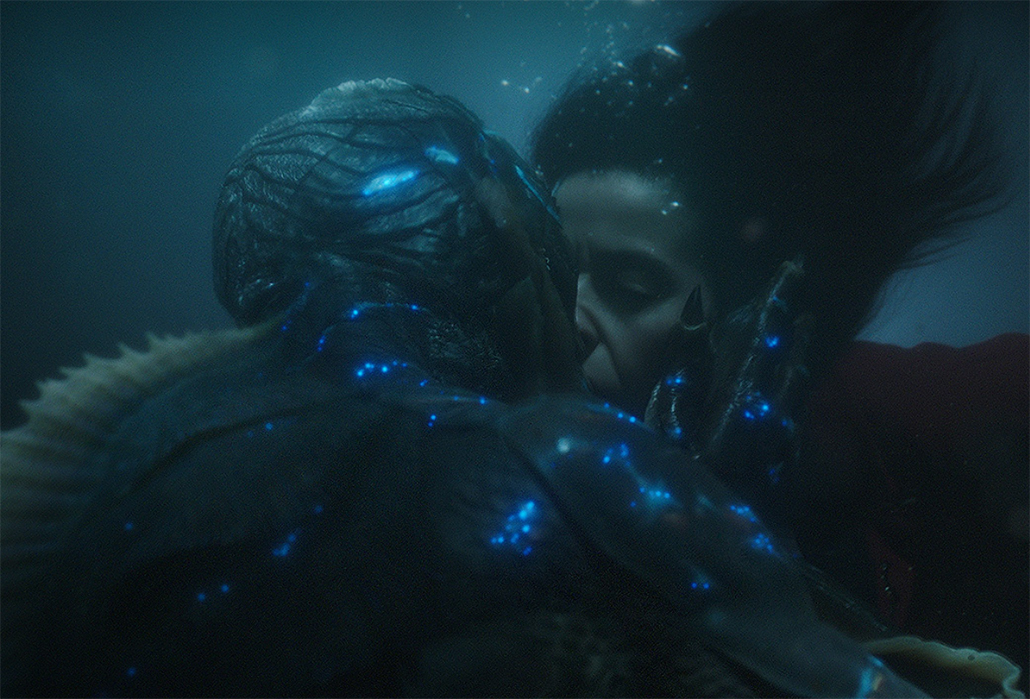 Just had to give The Shape of Water 5/5 for the awesome creativity and the love lavished on it by director Guillermo del Toro and his talented colleagues.

They catapulted both beauty and belief into a new realm of magic and reality.