Let’s start at the very beginning, really only the place to start… at A B C, or is it doe, re, mi…that’s it, wonderful notes that we can sing ‘a million different tones by mixing them up’. Doe re, mi three simple words that found their way into our hearts, minds and dictionaries after being sung by Maria, a postulant Nun based in a nunnery in the glorious ‘Baroque and Classical city of Salzburg in Austria in the movie The Sound of Music (1965). Now one of my favourite things, the stage musical version of The Sound of Music, is coming back to Australia to the Queensland Performing Arts Centre in 2016. It will be sure to woo a new generation of musical theatre goers to its favour. Coming to the Lyric Theatre stage in Brisbane from 11th March, 2016, The Sound of Music will be sure to touch more hearts and have people singing those catchy tunes all over again. You will immediately want to dash up the nearest mountain and whirl about and sing at the top of your voice. Salzburg where it was filmed and where the real story took place, is a picturesque and gorgeously aesthetically appealing city. Its Baroque style architecture has seen it listed as a UNESCO World Heritage site in 1997. The city owes a debt of gratitude to the most popular musical play and film The Sound of Music, which was filmed in its most historic and beautiful buildings and based on a true story. 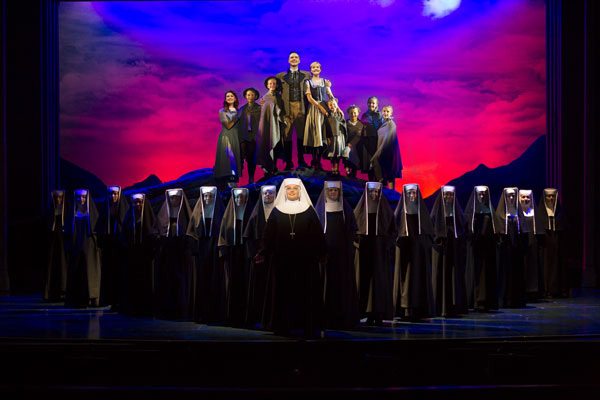 The 1965 musical The Sound of Music defined generations of people’s experience of ‘classical’ music as well as joyous musical theatre compositions by Richard Rodgers and Oscar Hammerstein, a powerhouse pair in Hollywood during my own formative years. Its had a long run at the London Palladium and now its coming to the QPAC The Sound of Music made the delightful Julie Andrews an international star overnight and captivated everyone with its joyous songs. It gained five Academy Awards and the song Eidelweiss, which many believed was a traditional Austrian tune, was only composed for the musical and not known in Austria at all until after the film when it became a huge hit. The role of Captain von Trapp in The Sound of Music will be performed by the multi-talented Cameron Daddo alongside the beautiful Marina Prior in the role of the Baroness Schraeder, Jacqui Dark as Mother Abbess, Lorraine Bayly as Frau Schmidt, and in the much coveted role of Maria Amy Lehpamer a young lady making a great name for herself as one of Australia’s most outstanding award winning musical theatre stars.  The Sound of Music, the perfect family treat and tickets are sure to be a favourite and fabulous Xmas gift.  The Sound of Music, Lyric Theatre, QPAC | BOOKINGS

What creates an ultimate cool factor? How can a personality be summed up in fashion? Sunglasses are the key. Shape, colour, lenses, bling, no bling say a lot about one’s personality. Here in the southern hemisphere they are pivotal to the safe sun message, and not just a fashion statement….