The Spooky Men’s Chorale ensured the fine art of superlative silliness reached subliminal levels and beyond at the Melbourne Recital Centre on Saturday evening 29th April, as a bevvy of bearded and clean shaven boys wearing wondrous hats and crooning terrific tunes, left their fans and followers quite literally dancing in the aisles.

Long will The Spooky Men’s Chorale’s luminous residue resonate in Melbourne town – what a triumph on their first visit, with every single person in the packed out house up on their feet and dancing with the one they love, or otherwise a neighbour, as their favourite spooks fulfilled their promise and laid waste the land in which they were travelling.

They have now well and truly embarked on their first National tour of Australia, which ends on June 28. So if you want to end up ‘moist eyed with mute appreciation or haplessly gurgling with merriment’ then jump online and secure your tickets now. This is a night out in the annals of magical music not to be missed, an event to cherish, an experience to share with family and friends and one that will impress the hell out of anyone you care to take along.

The Elizabeth Murdoch Hall with its splendid acoustic was the perfect venue for this night of man anthems of the truly ratty, rousing, semi religious and mostly irreverent kind. There is no way anyone can get away with being this silly, while providing so much happiness and joy for others, without having mastered the craft of singing ‘in choir’ producing music that adds yet another layer to civilisations rich tradition of vocal polyphony.

There was lots of shouting out from this assemblage of deadpan purebred mongrels, whose group feelings were laid open by the clever repartee and brilliant, patter designed by their muffed hat wearing Spookmeister Stephen Taberner. He truly resides on the right hand side of genius; a singer, songwriter, double bass player, composer and choirmaster, Taberner has all the necessary credentials and although he did originally hail from across the pond, we Aussies are big enough to forgive his whims and trespasses. Witty, weird, wonderful self confessed oafs and philistines who mix deadpan comedic expressions with sophisticated musical might, no one can possibly match The Spooky Men’s Chorale for singing about their favourite appendage of the human body, the foot. It not only carries them home, but also adds a certain je ne sais quoi to proceedings.

Then there is a celebration of the ‘eyebrow’, which contributed to them being found not on stage at a Fringe Festival but in the most prestigious and superbly presented recital hall in Melbourne, the capital of the arts in Australia.

Despite what you may be thinking, their harmonies singing unaccompanied or in musical terms a Capella as they do so well, is truly glorious. The love song they presented during the first half didn’t leave a dry eye in the house, which was in direct contrast to the mirth afforded by an Affirmation of St Kevin the Usual, in the traditions of Georgian chant, or their simply unforgettable Man in the 17th Row 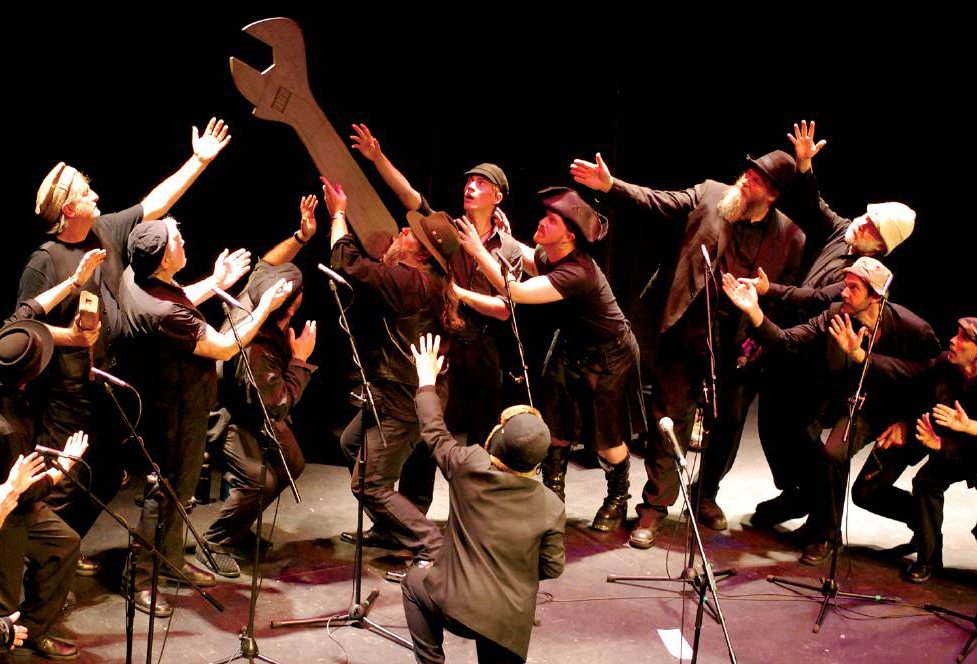 Finishing up before interval with their world famous man anthem, the man and his tool, which in fact was a giant wrench, interval saw the Spooky Men mingling among the crowd in the foyer, not taking time out backstage, a wise move that endeared them to the crowd at hand.

Wondrously we started the second half after interval with their rendition of ‘Welcome to the Second Half’, a deliciously silly song that went down a treat.

I should at this juncture point out, that throughout this amazing concert while the Spooky Men were performing, many people became so animated, especially a couple in front of me, you would be pardoned for thinking they were about to have a heart attack, such was their enthusiasm for their heroes. The Universal Club song went down a treat, followed by a chat by the Spookmeister who more or less said we must blame their rise to the heights that saw them on stage in Melbourne on the passionate pursuit by all the boys of Georgian Polyphonic music and their admiration for its ‘pointless grandeur’.

Situated on the border of Europe and Asia, Georgia is a country with a rich and still vibrant tradition of music, which is primarily known as arguably the earliest polyphonic tradition of the Christian world that is loved by choirs, opera singers and many others working in the classic music field, which in this context means it is music of renowned excellence.

The songs they sang were superb, showcasing their true talents as they intrinsically harmonized so well with each other. These mountain men (most hail from the Blue Mountains of NSW near Lithgow) sang a rousing round or too accompanied by hand clapping, which we were invited to join into. Sedately it started, spasmodically around the room and then the couple in front of me reached all heights of absurdity clapping up a storm during what turned out to be basically for them, a free for all event. Their enthusiasm recognised by the Spookmeister from the stage.

Every thing then calmed down again as we all became enraptured when considering what has happened ‘ever since I put your picture in a frame’. Nostalgic heights were aimed for and reached.

Moist eyed and dewy we then joined into some seriously silly whistling before the wondrous and bountiful Ode to Jim. The work that finally brought my companion and I both quite undone was their rendition of a marvellous poem by Alfred Lord Tennyson “Crossing the Bar, in which the poet was speaking about his own impending death.

Sunset and evening star,
And one clear call for me!
And may there be no moaning of the bar,
When I put out to sea,

But such a tide as moving seems asleep,
Too full for sound and foam,
When that which drew from out the boundless deep
Turns again home.

Twilight and evening bell,
And after that the dark!
And may there be no sadness of farewell,
When I embark;

For tho’ from out our bourne of Time and Place
The flood may bear me far,
I hope to see my Pilot face to face
When I have crost the bar.

Goodness we didn’t think we would ever feel quite the same again. However, absurdity was about to reign one last time as donning their version of high ‘Sufi’ hats, The Spooky Men’s Chorale delivered they’re prophecy, with a sterling tribute to the Bee Gees – pure perfection! Luminous residue abounded as we all left the grand dame’s hall on a pinnacle of joy, with yet another treat awaiting, We were all given the opportunity to personally greet one of the indomitable Spooky Men, who were either in the foyer or at the door to shake hands with their audience and to say goodbye.

We certainly hope they will come again soon. In the meantime after circumnavigating Oz they will be back in the UK in August for their 6th year of summer mania at major festivals and local theatres.

Adult entertainment at its most absurd and wonderful.  Five Golden Stars.