In a special arts and cultural exchange, the National Museum of New Delhi, India and the National Gallery, of Australia, Canberra are collaborating to present one hundred and one paintings that help to illustrate and share the excitement of the Ramayana.

‘We are delighted to share with all Australians the story of Ramayana, one that transcends generations and is reflective of our rich and deep culture’ said Mr. Sanjiv Mittal, Joint Secretary, Ministry of Culture and Director General, National Museum of New Delhi.

In the tradition of ancient epic poems, the Ramayana is a story of intrigue, love, loyalty, betrayal and the triumph of good over evil, which was meant to provide moral guidance and enlightenment to the general populace.

Hinduism like Christianity has a trinity – Brahma the creator, Vishnu the Preserver and Shiva the Regenerator. They are however reincarnated in a number of forms including animals, to assist humankind in times of crisis.

‘Rama, hero of the Ramayana is one of nine major incarnations of Vishnu on earth. The son of King Dasaratha, Rama is believed to been placed on earth to perform the task of conquering Ravana the ruler of Lanka and king of the demons’.

Transcribed by Valmiki, a poet of the fourth century before the Christ event, the Ramayana is also a story of love reinforced though a hundred and one miniature paintings. 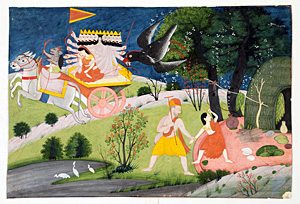 They illustrate the narrative and its important concepts of ideology, devotion, duty, relationships and both dharma and karma.

Dharma is a major concept in Indian life, all about cosmic moral order underlying all of humankind’s existence. The dilemma for everyone is in making the best choices in life by considering both principles and circumstances before action.

The decisions we all face in life according to dharma are all ‘thought-provoking’. This is why we are called to consider them wisely, taking the time to do so.

However while that may be the best way, time is quite often the enemy and we are often called upon to make instant decisions due to urgent circumstances.

Dharma embraces the idea though that if we have trained ourselves to look at a problem from all angles first and prior to that time, then hopefully we will make the right choice when the chips are down.

National Museum of New Delhi specialises in miniatures, having one of the largest collections in all the major styles.

The written manuscripts that have long since been dispersed, are kept alive all over India, as revealed by the diversity of regional painting styles.

Miniature painting in India dates from the tenth century, when a fashion grew up for stories to be recorded on palm leaves. On paper from the 14th century they came to a pinnacle of excellence under the rule of the Mughals and their court style. This was when a rich lyrical style emerged, with many artists collaborating to produce one work together.

Some were colourists, other’s designers, and the practice thrived at the courts of the Mughal (Central and North India), Rajesthani (West India), Pahari (Hills of the North) and Deccani (Southern India) courts, where the emphasis was on a recreation of the mood so the emotion (bhava) could be felt by the viewer. 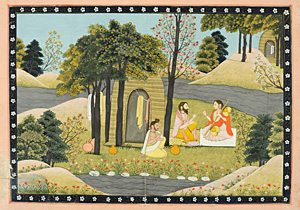 The story begins with a sage; a wise man commissioning the poet to record the story of Prince Rama, who is basically the Avatar of one of the Hindu gods Vishnu, whose job it is to preserve the peace.

Throughout the narrative Rama, Dasaratha the King of Ayodha and his father, Lakshmana his brother, Hanuman the monkey general and devotee to Rama and Sita the princess Rama loves, all are faced with choices that test their beliefs, commitment, duty, loyalty and love.

The cast of characters is vast, the religion Hinduism has many pathways for the protagonists to choose from and revelations are heard not read. 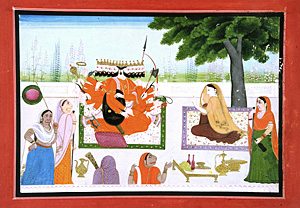 There are many events associated with the exhibition; screenings, talks and lectures including a special kid’s program, bringing the paintings to life and revealing how the story has impacted on religious and political development of the societies in South and Southeast Asia.

During July Claudia Hyles, independent researcher will examine the role of the monkey god Hanuman, known for his courage, power and loyalty, in the Ramayana story.

Dr McComas Taylor, Associate Professor, ANU College of Asia & the Pacific will also examine the literary tradition of the Ramayana and how the epic retains its relevance and vitality through a process of appropriation.

The Story of Rama is a great arts and culture event.

French painter François Boucher produced many of the images we have of Jeanne Antoinette, Marquise de Pompadour, official Mistress of King Louis XV of France