Twentieth century style is surely the Art that is Life as first envisaged by English Arts and Crafts founder and social activist William Morris (1834-1896). He tried to make his vision of beauty, an actual part of everyday life as he saw modern mechanical industry destroying ‘mans natural purpose and sense of order.

Morris wanted to simplify life for everyone and his inspiration was nature.

Many responded to his call by producing some amazing objets d’art, such as this stunning ‘Tudric’ pewter clock, c1905, designed by David Vasey inspired by the Tree of Life motif. Sold at Liberty of London at the height of fashion, it has a superb enamel dial in pristine condition.

The thoughts and inspirations of designers of the twentieth century will be reflected in many of the decorative arts on both show and sale from 22nd May to 25th May at THE SYDNEY FAIR in the Byron Kennedy Hall in the Entertainment Quarter, Moore Park at Sydney. Dealers will showcase art deco, vintage and contemporary design.

A success during its first year in 2013, THE SYDNEY FAIR 2014 will be bigger than before, showcasing the best of jewellery, furniture, art, lighting, porcelain, glass and vintage fashion.

The list of dealers includes many who only deal online (no galleries) and come from all over Australia. They will be warmly welcoming international exhibitor colleagues Lucky Vintage from Seattle  and Thrifted and Modern from San Francisco. For the ‘fashion forward’ for the first time in Australia dresses from ten of the best designers to the Hollywood stars will also be on show and sale.

These include dresses by designers such as Ceil Chapman, Helen Rose, Adrian Gilbert and Irene Lentz who were working with celebrity clients.

They included television and movie actresses such as Audrey Hepburn, Marilyn Monroe and Elizabeth Taylor, producing costume for both film and for their private lives.

This means anyone will be able to purchase some wonderfully unique pieces.

William Morris’s fellow high priest or prophet if you like social commentator John Ruskin (1819-1900) who Morris revered and admired, also wanted to live a life in which art, nature and social values were balanced by the values of science and industrialism.

He believed that would make for a truly human culture.

They were both men helping to give birth to our modern age.

‘We are here to lead you back to the realities of life’, Morris had said, ‘to show you how to use your hands and your heads, which your machines have already made over half of the population lose’. A desire for novelty or the exotic in the late nineteenth century carried over into the twentieth and it ensured that revivalism remained a potent force.

Morris and Ruskin both supported the development of architecture as at the beginning of all art and the age of ‘Modernism’. For them architecture dignified and ennobled public life and was a source of power and renewal for the society that produced it.

If you are in London at any time try and visit the John Soane Museum at Llincoln Inn Fields where you are able to stand across the road from the house first and see the first vestiges of the ‘Art Deco’ style in its facade, designed by architect Sir John Soane, R.A. (1753-1837).

Today Soane is celebrated by many as a man before his time, a man who ‘simplified’ classical line, which is what the Beidermeier and Art Deco styles are really all about.

Soane demolished and rebuilt three houses in succession on the north side of Lincoln’s Inn Fields and his new house conformed to the building line of the square. His facade was distinctive, having a rustic brick cornice at the top and being built of white Norfolk bricks which would have stood out among the surrounding houses and was completed 1792-1794.

Beidermeier was really the forerunner and inspiration for Art Deco, which did not appear for a century later.

Virtanen Antiques from Melbourne will be exhibiting at THE SYDNEY FAIR

They specialize in furniture from Beidermeier to the Art Deco period and including special pieces from the 20th century.

They had a stunning stand at the recent AA&ADA Melbourne Fair, highlighting the Beidermeier period, which was all about a rage for simplicity and the forerunner and inspiration for many works in the Art Deco period. 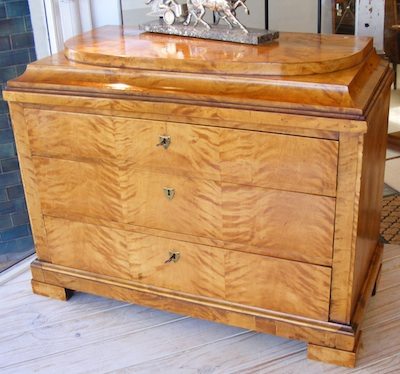 The style’s name is a play on Bieder, meaning unpretentious or plain. Maieir is a German surname much like Smith or Jones and a Beidermann embodied the bourgeois values of reliability and a good reputation – he was a good and law-abiding citizen.

In its purest form the style, based on classical proportions, lasted 15 years between 1815-1830, some dealers have it ending at 1848. It certainly surmounted the more lavish and ornamental styles, which preceded it by being at first, wonderfully simple and while functional extremely elegant.

Middle class homes were lovingly groomed to create a pleasant surrounding in which domestic life could be enjoyed thoroughly.  Furniture was reserved in design, of fruitwood or mahogany, graceful and functional, the interior meant to invite not impress.

They believed style should reflect the personal taste and functional needs of an industrious family. 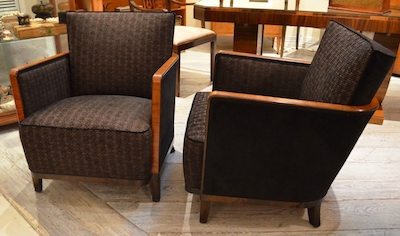 The 1925 L’Exposition International des Arts Decoratifs et Industriels Modernes in Paris after whom the Art Deco Movement, or modern style has been named, was conceived in 1907 but rescheduled many times as the first World War came and went.

The Art Deco style was inspired by genteel society, which was the other end of the spectrum. Art Deco would become the universal style of the 20th century, the first based on legitimate principles of design for over 125 years. It was not a return to the past or an imitation of it, but rather a need deeply felt, of that to invent a new form of classicism.

It sought to integrate contemporaneity, while preserving the will to art against those who consciously worked for the undoing of art.  Its exponents wanted ward off the threat of a civilization wholly dominated by industry and technics. 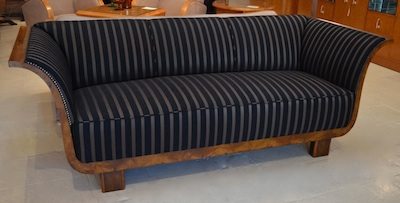 Art Deco drew on purity of form and refinement and its cabinetmakers applied an opulent mix of newly fashionable and exotic materials to a plethora of equally exotic and rare timbers, the like of which had not been seen before and of such quality had not been seen since the cabinetmakers to the old ancien regime had held the title ebeniste du roi.

By the 1920’s vast social changes crystallised in an era of care-free release initiated by the end of the war. From the Pyramids of Egypt to the beat beat beat of the African tom tom. Artists particularly appreciated the bohemian aspect of romantic foreign cultures. 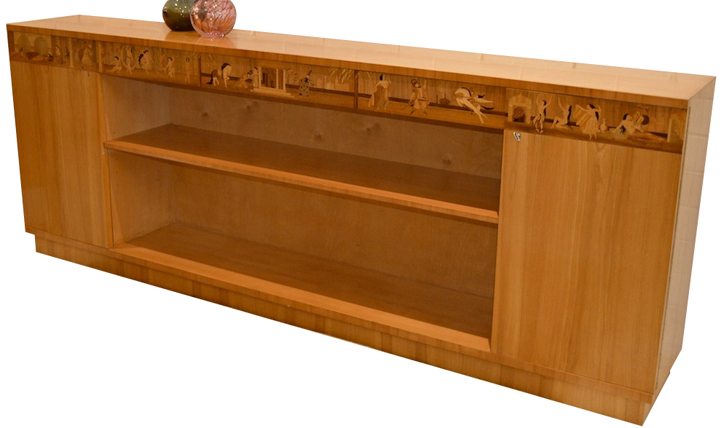 The new age of modernism drew on developments of avant- garde painting with abstraction, distortion and simplification and function over form began its rise to the forefront of design, inspiring designers right up until Modernism collapsed with the onslaught of World War II.

It embraced the two extremes of historical continuum, from the ancient past to the distant future and from the secular to the sacred.

Following World War II the Art Deco style inspired some designers in the late 40’s and 50’s, but in a lot of ways it had become ‘debased’ and its purity of streamlined simple style was lost.

With the advent of the social revolution of the sixties and seventies, and as a direct result of the technological developments and advances that had taken place during the war coupled with the loss of so many designers and architects, the new age more or less was forced to reinvent style all over again.

Italy was once again at the forefront. This superb ‘mob of horses’ was designed by Italian Aldo Londi for Bitossi whose factory was miraculously spared from destruction during the war. His influence was taken from ancient Greece, Rome or China, [yellow]. They pre-date the discoveries of the terracotta army in China, which contained similar horses, by 11 years.

THE SYDNEY FAIR reflecting on the design, art and style of the twentieth century promises to be an exciting one this year.

The Culture Concept Circle’s Fashion Editor Jo Bayley will go along on opening night and review it for us.

The Sydney Fair co-ordinator and founder Dianne Pickett of Online Antiques has generously offered The Culture Concept Circle readers and subscribers an opportunity to enter the fair for FREE (Value: $20 each or $10 each Concession)

Download The Sydney Fair FREE invitation, valid Friday 23rd to Sunday 25th May during opening hours. Print it off and take it with you.

There will be 27 exhibitors from Australia and overseas representing all the disciplines of this era, Furniture, Lighting, Sculpture, Art, Ceramics, glass, jewellery and vintage fashion

What is Art Deco

In the tenth and eleventh centuries in England and Europe the landscape resembled a frontier society. Fragmented, fearful and fortified against itself the feudal system was about the lord and castle, the peasant and hut, the monk and church. Crusaders introduced the brick and decorative brickwork into England via France…