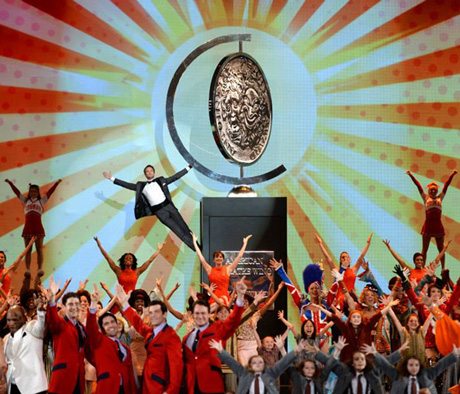 There is really nothing like the live theatre and awards program named for actress, director, producer and wartime leader of the American Theatre Wing Antoinette Perry, the Tony Awards®. Beginning in 1947, this show is a joyous celebration of high-energy creative performance art.

From its very beginning this award show, which is a glorious production in itself, has become one of the highlights of the New York theatre season. Sponsored today by Cadillac, surely one of the most appropriate associations; stretch limo arrivals being such a wonderful example of ‘theatre’.

Telecasting the event began in 1956, followed by a great gala that with the exception of a few years, has on Broadway, been held where all the ‘stars align’ in the historic, iconic Radio City Music Hall. This year it has proved to be ‘Bigger’ than ever before, the title of the most amazing opening number for the 2013 ceremony, that surely would win an Academy Award on its own if nominated. 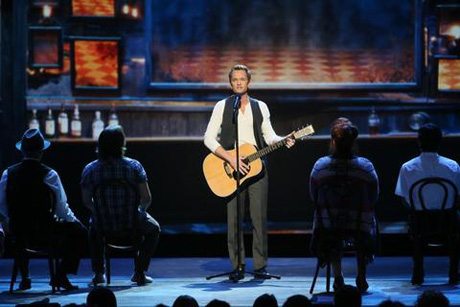 Superlative is not a good enough description for the combination of magic; singing and dancing, which was led by popular Emmy Award-winning presenter and producer Neil Patrick Harris, who quipped  “On Broadway we don’t need extreme closeups to prove we’re singing live.”. He was joined on stage by boxing’s legend Mike Tyson who enjoyed himself immensely.

The stunning opening number set the wildly applauding and cheering audience up perfectly for the show ahead, which presented a cast of colourful characters and provided them with an opportunity to perform and make memorable appearances, while saluting excellence in the Broadway theatre. Broadcast around the world in 2013 through CBS and its distributors, stars of stage and screen joined the well-known personalities including Tom Hanks, Zachary Quinto, Scarlett Johansson, Cuba Gooding Jr., Jesse Eisenberg, Jon Cryer and Martha Plimpton take part as expected.

Courtney B Vance won the first award of the evening for his role in Nora Ephron’s The Lucky Guy in which he features along with an amazing cast dominated by male talent, including Tom Hanks. Best actress Judith Light, appearing in Richard Greenberg’s The Assembled Parties a new play described as ‘funny and heart-warming – ‘about the way time changes those we love’.

As would also be expected, the writing is integral to the shows success. Tom Hanks, introducing the Actress award related a conversation he had enjoyed recently with Julie Andrews, when she told him that ‘until Broadway came into her life, she didn’t believe she had made it’.

There was also many surprises as the show moved along, highlighting talented theatre playwrights, performers and performances whose works are currently in the spotlight.

One of the earliest awards was the delightful interlude with olive wreath clad Oliver Platt as Comedy and gold Caesar style wreath clad Liam Neeson representing Tragedy – ‘screw you’ he said, as they provided a witty tongue-in-cheek promotion for the American Theatre Wing.

She gave a truly magnificent speech when Tom Hanks presented her award, complimenting the fine cast and crew who surround and support her for every performance eloquently.

The show is broadcast live for the thousands who gather in Times Square and as is usual today, features the full-on Red Carpet Celebrity arrival experience. It also offers social media followers a continuing experience as the awards gradually unveil and interviews with the winners are broadcast live as the show proceeds. Making it on Broadway has long been the ambition of those who aspire to be part of live theatre in America. From dramas to musicals, from comedy to costume, the awards given cover the whole gambit of production, including the featured actors, the producers, the scores, the design, the choreography, the costume and lighting and above all the directors, whose vision brings the playwright’s intention to light.

Focus at this year’s awards are those nominated for the best plays – The Assembled Parties, The Lucky Guy, The Testament of Mary and Vanya and Sonia and Masha and Spike and the best musicals – Bring it On The Musical, A Christmas Story the Musical, Kinky Boots and Matilda the Musical.

Must admit I wouldn’t mind seeing Vanya and Sonia and Masha and Spike which features Tony® and Academy Award® nominee Sigourney Weaver and Tony and Emmy® Award winner David Hyde Pierce after seeing them both interviewed about the show. This irresistible new comedy by Christopher Durang had sold-out, smash-hit engagements before arriving on Broadway.

Sigourney Weaver also appeared with the New York Mayor Michael Bloomberg, whose support of Broadway during his administration was acknowledged. He announced that a staggering 11 million plus people have attended Broadway shows over the past season.

Revivals of popular plays and musicals have their own awards and include such perennial favourites as Who’s Afraid of Virginia Woolf and Roger and Hammersteins’ Cinderella.

They presented the award for the Best Revival to Who’s Afraid of Virginia Wolf.

A special tribute to the haunting and beautiful love story seven time Tony award winning musical Phantom of the Opera, Broadway’s longest-running show, was sung brilliantly by its current stars Peter Joback as The Phantom and Samantha Hill as Christine Daae. Smash hit Matilda the Musical based on Roald Dahl’s much loved story, is a huge focus as four of the actresses who created the role on Broadway Sophia Gennusa, Oona Laurence, Bailey Ryan and Milly Shapiro are nominated for Tony Honors for Excellence in the Theatre.

The list of nominees and the winners for the Tony Awards 2013 is indeed impressive and can be accessed here. The closing number ‘New York’ was a marvel of nostalgia.

The Tony Awards are all about humanity, harmony and heart – I for one wouldn’t mind going to ‘Tony’ daycare!