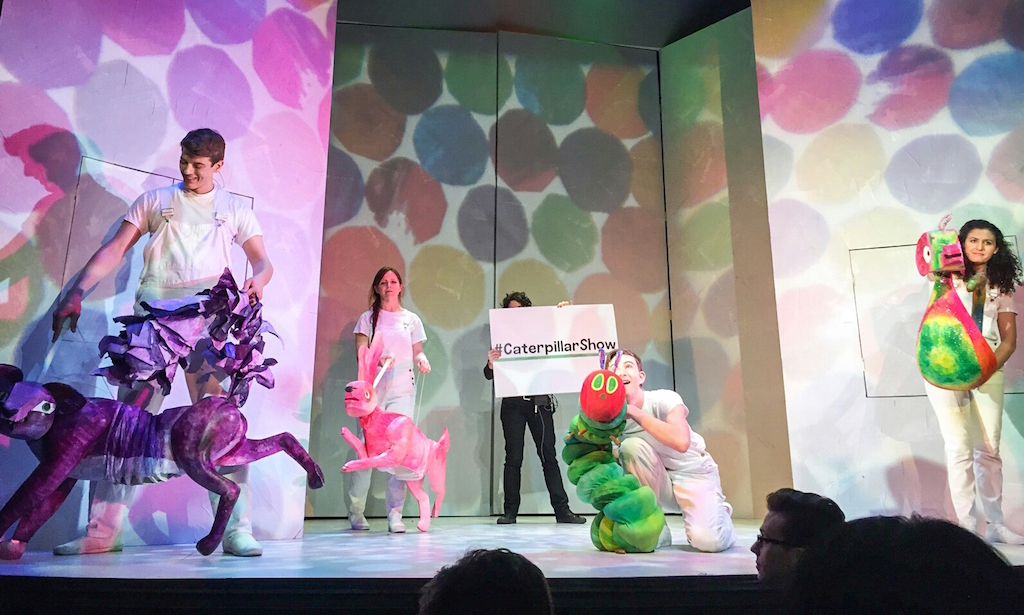 The Very Hungry Caterpillar Show at the Sydney Opera House was an enchanting celebration of four of Eric Carle’s picture books. The show was timeless theatre that entertained and delighted all generations.

The stories about friendship and finding your place in the world were told with a rare and simple beauty. Toddlers, children, parents and grandparents beamed with the joy of instant recognition of their favourite characters. 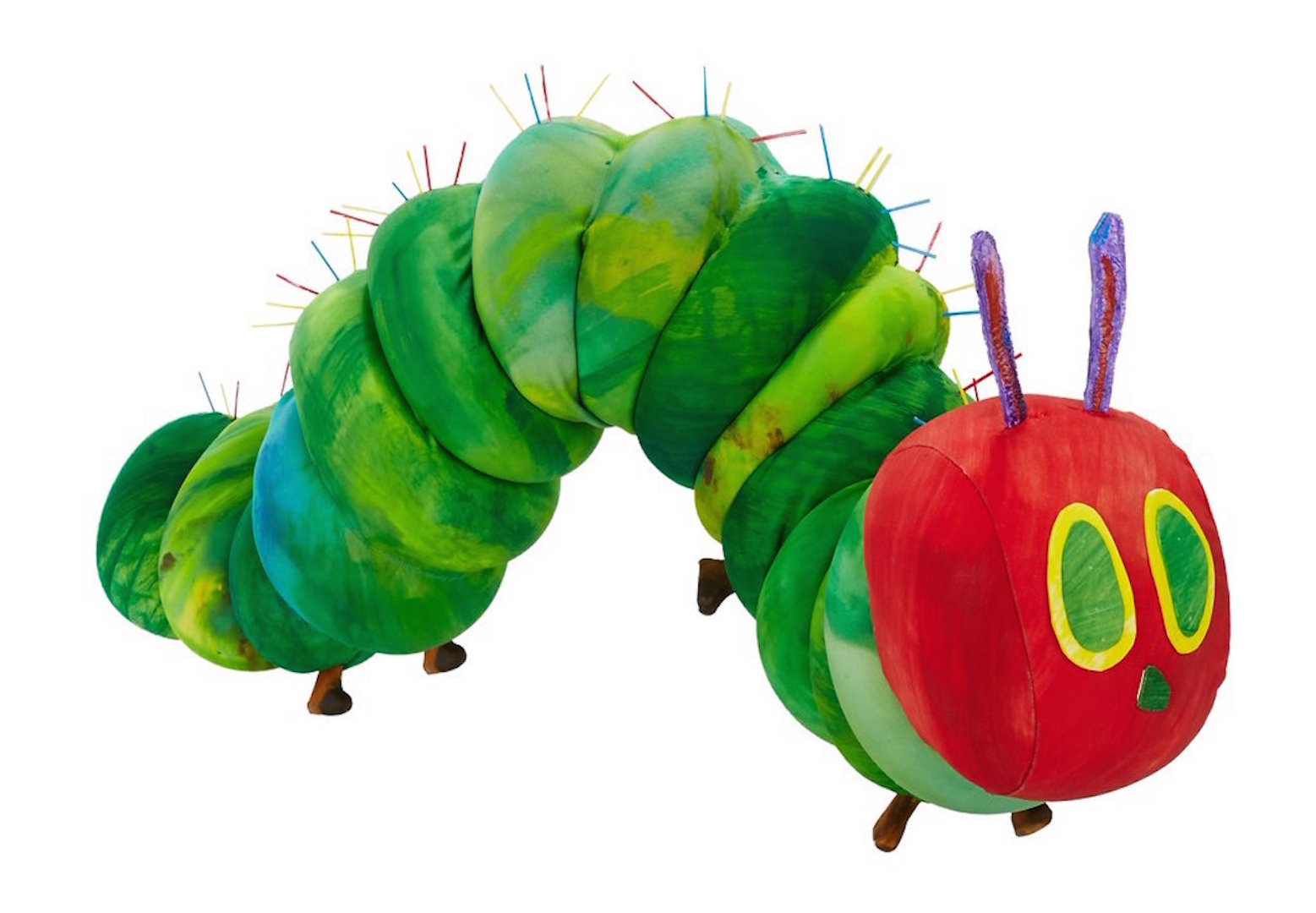 Eric Carle is an acclaimed writer and illustrator of children’s books. The most famous and now a classic is The Very Hungry Caterpillar. It has been translated into sixty languages and sold over thirty eight million copies. Who could resist the beloved tale of the caterpillar and his munching through delicious tasty morsels of foods?

This Australian made show was created by Jonathan Rockefeller. He chose to bring Eric Carle’s books to life because of the ‘artwork’ in the books. He believes “the guiding principle” learned from Carle is to “keep things simple and elegant.” He continues this is “a great haiku when creating a project for first time theatre goers,” (according to Jade Kops). 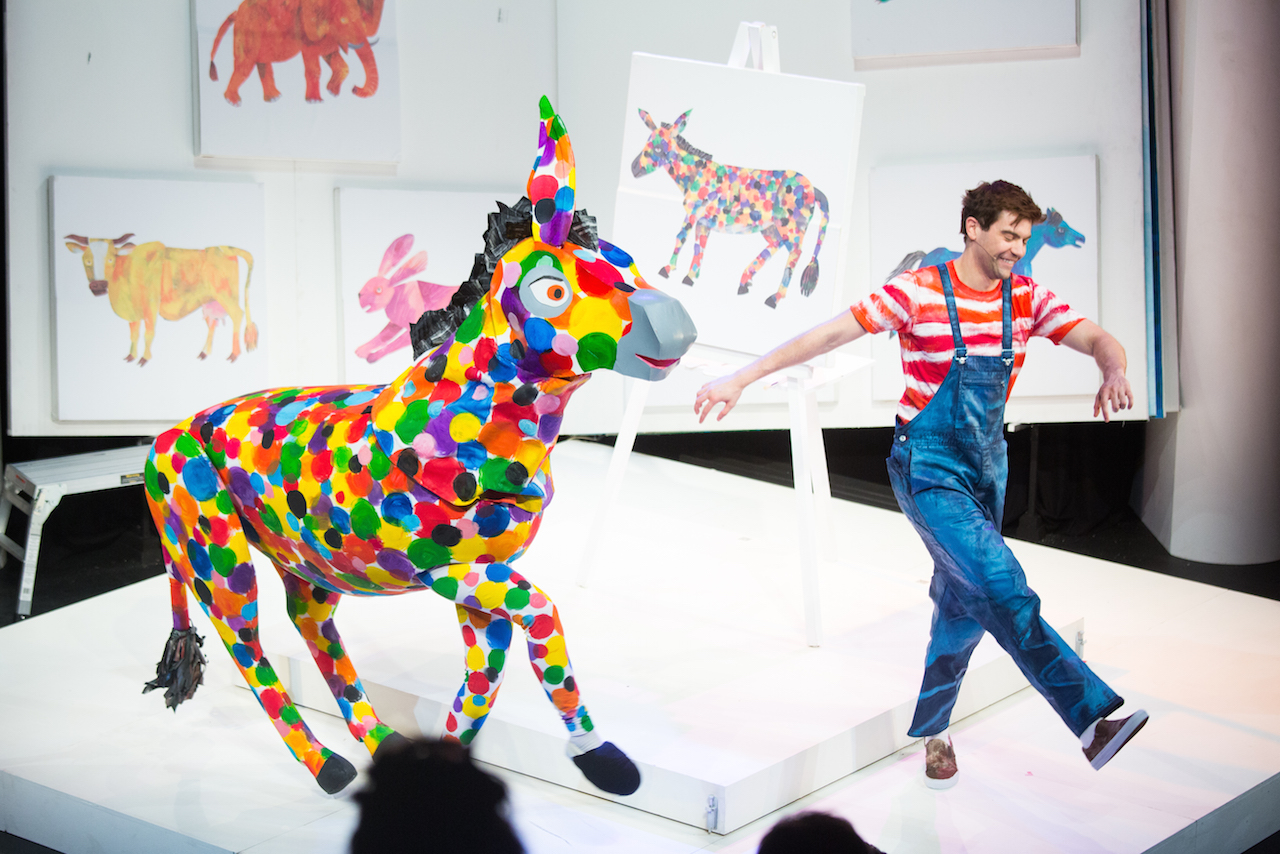 The show featured seventy five magical puppets created by New York’s Puppet Kitchen. Puppets have been used since the earliest of times to animate and communicate the ideas and needs of human societies and this was a very successful contemporary puppet based theatrical experience.

In the show the startling clarity of design and the integrity of interpreting Carle’s exquisite illustrations were profoundly wondrous.

Astutely and sensitively directed by Naomi Edwards where her flair for the artistic unity of the production was accomplished with perfection. 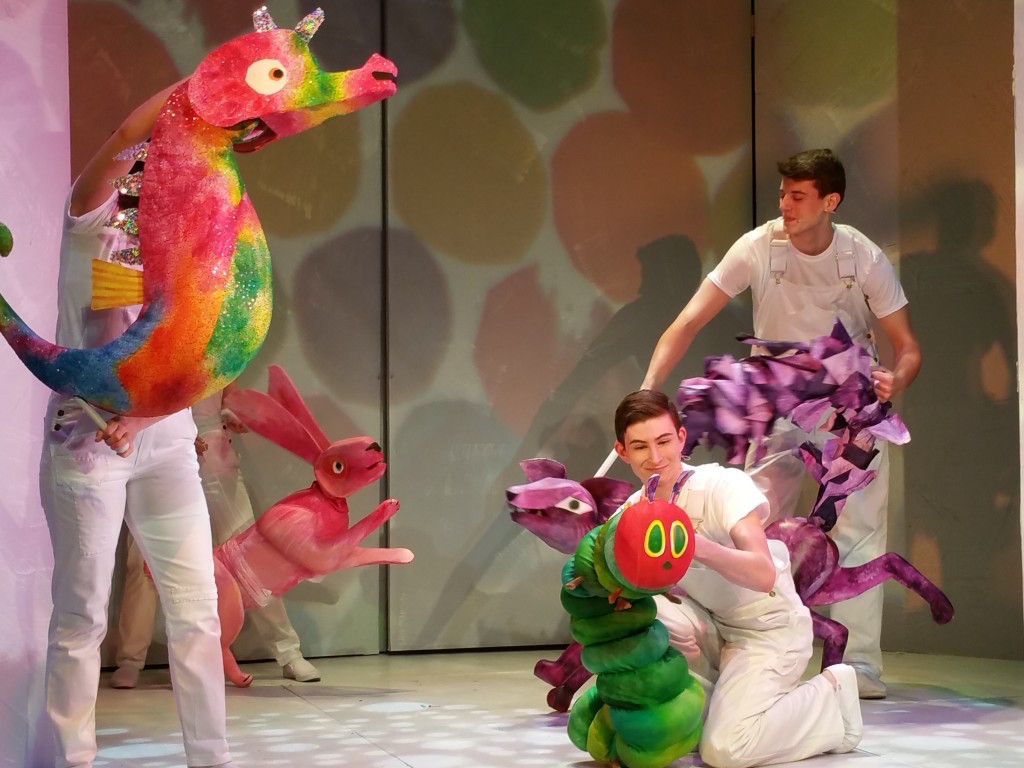 The Set Designer James Browne imaginatively constructed an open book and with the clever lighting by Nicholas Rayment the stage reflected the colourful circular shapes from the inside covers of The Very Hungry Caterpillar. The magic of Eric Carle’s illustrations set the audience into a state of wide eyed wonder.

Two platforms were built horizontally on the stage and the light from the kaleidoscope of coloured shapes on the background bounced and shone on them. The larger than life spines of books created a powerful impact and emphasized that books and story-telling were the focus of the show.

Then everything dramatically changed to white and the show opened with the artist confidently articulating “I am an artist and I paint…” With his palette and paintbrush in hand he moved to the easel and mysteriously a soft blue piece of material emerged and it was woven through the air while the easel revolved to reveal a painting of a blue horse. This process of discovery continued with not only a painting of a red crocodile but an enormous red crocodile puppet making its appearance to audience gasps. The wow factor was sealed with the crocodile’s mouth opening and teeth chattering.

The actions, gestures and speech of both the actors (Dannielle Jackson, Rory Kelly, Justine Warner and Drew Wilson) and the large puppets compellingly complimented the story telling.

Then with the simple installation of seaweed panels and a turn of the page to display the sea with bubbles floating, the story of Mister Seahorse began. The story tellers wore snorkels and goggles as they drew the audience on Mister Seahorse’s journey. 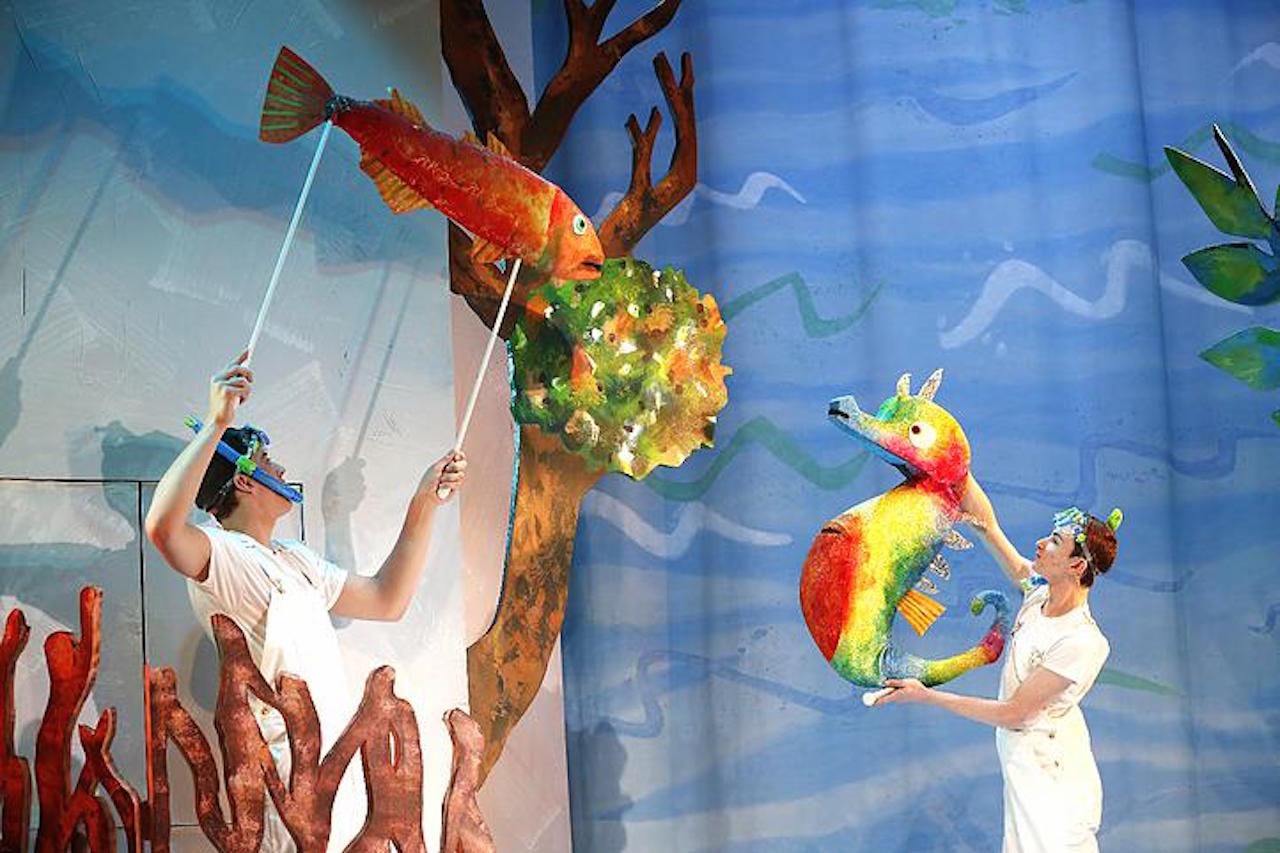 Mrs Seahorse had laid her eggs in his pouch and Mister Seahorse was ever protective of his precious cargo while exploring the ocean and greeting the sea creatures he met on his travels.

The puppetry was spell binding as the actors moved the puppets with a liquid fluency. The fish tail flapped, the stickleback swam effortlessly and the lionfish’s tail swished through the sea.

The audience learned that Mr Tilapia carried his sparkling red eggs in his mouth. While Mr Pike clutched the eggs along his stomach and Mr Tilapia couldn’t speak because his mouth was full of eggs. Mr Bullhead’s eggs had hatched and he was taking care of them. The message of paternal responsibility and nurturing was gently delivered.

Finally Mr Seahorse’s eggs safely hatched and were beautifully illustrated in a sheer screen printed fabric that floated and dipped in the ocean.

An insect on the end of a stick was The Very Lonely Firefly who was relentless in his search for his family. His discoveries included a lamp, a candle, a torch, a lantern and fireworks until finally he found his own place within a family of fireflies. 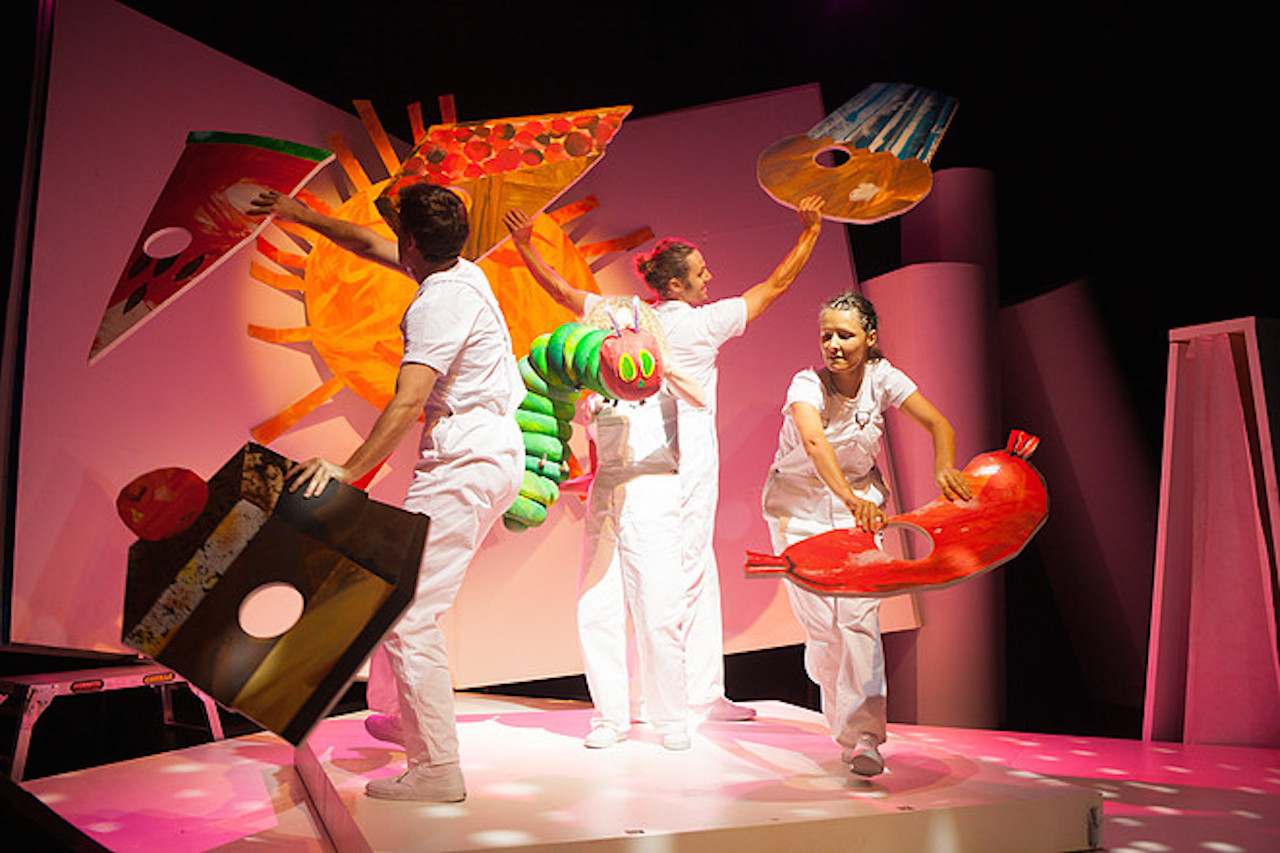 As the light of the moon shimmered on a white egg the audience anticipated the birth of their beloved caterpillar and the excitement was palpable. The caterpillar popped out of the egg and began eating his way through a variety of food, beginning with one apple on Monday The audience contagious enthusiasm for chanting the repeated line “but he was still hungry,” was evidence of the popularity and familiarity with this endearing text.

The Very Hungry Caterpillar book has a wealth of early learning concepts related to life cycles, counting and days of the week. It is wonderfully interactive with tactile experiences as children feel the way the caterpillar eats through the pages, adding to the fun of the reading. This was charmingly captured on stage as the revolving platforms exposed the holes in the food the caterpillar has devoured.

The food puppets travelled around the stage in skilfully choreographed dance sequences. The actor’s nimble manoeuvring of the puppets gave focus and rhythm to the performance. The synchronised movements of the puppets reflected the cheerful character of this story.

Later the caterpillar disappeared behind a large leaf and afterwards surfaced as an enormous caterpillar sliding and falling down the leaf. Next he built a cocoon. It was expertly fashioned in the form of a batik patterned material bag dropped over the caterpillar’s body 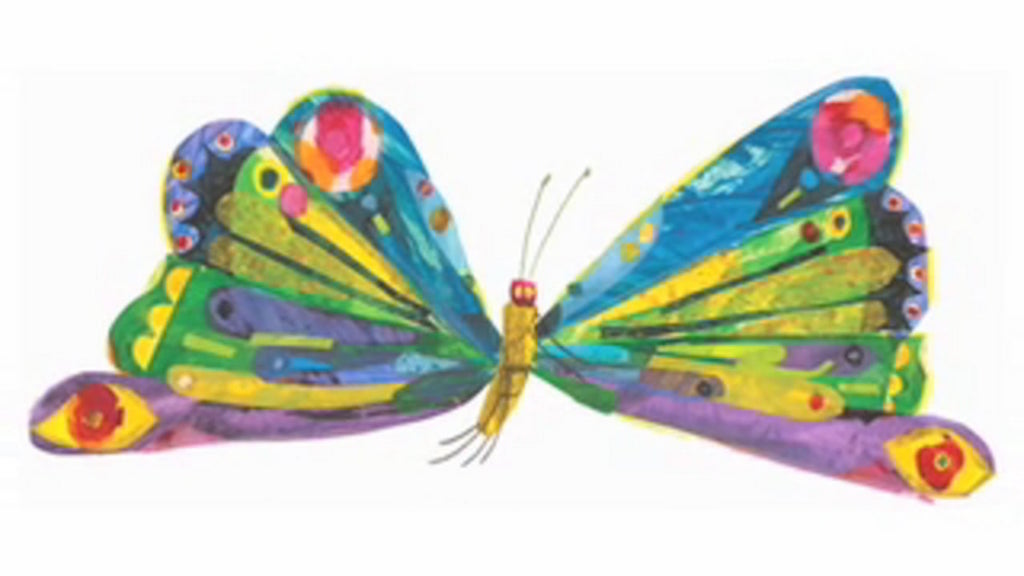 Out of the book flew a beautiful butterfly and the audience was entranced by this charming story of metamorphosis.

Every aspect of this production was impeccable and the heart-warming interpretation of the books was authentic and honoured the originals.

I believe it created an appetite for a new generation of theatre goers and for me it presented the boundless warmth and imaginative genius of Eric Carle’s wonderful stories and charismatic illustrations.