Danish prehistory culminated in what is now known as the Viking Age, a period from 800 until 1050 AD when Germanic men raided, traded, explored, and settled vast areas of Europe, Asia, and the North Atlantic islands.

The word Viking itself was only introduced into the modern English language during the 18th-century, when it also acquired romanticised heroic overtones of a barbarian (someone who spoke in a foreign tongue), or noble warrior.

During the Viking period the old Nordic religion and gods were replaced by Christianity.

The first kings appeared, ruling an area roughly corresponding to present-day Denmark and by the end of the Viking Age they ruled over England and Norway, during certain periods.

Vikings: life and legend will be a major new exhibition for the British Museum developed in cooperation with the National Museum of Denmark and the Berlin State Museum, is starting on the 6th March 2014.

The show will be presenting objects and important Viking age artifices from both the Museum’s own collection and also other places in Britain and Ireland.

Swords and axes, coins and jewellery, hoards, amulets and religious images will reveal how the Vikings created an international network connecting cultures over four continents.

Undoubtedly the feature of the show will be the remains of a fabulous longship, the longest ever found at thirty-seven feet. It was built in southern Norway somewhere around 1025 and archaeologists have revealed that it was deliberately sunk in a harbour in Denmark during the 11th century.

The Viking’s skill in shipbuilding and seafaring was central to their culture and achievements. The ship known as the Roskilde 6 was, like other ships of her design, developed for warfare and exploration and demonstrated great speed and agility.

Longships were also equipped with oars, which meant they could be sailed and navigated independently of the wind.

Poems of the Viking peoples by the Elder Edda (Poetic Edda) and the Younger Edda (Prose Edda), originally passed down through the generations in an oral tradition, were reinterpreted by writers at the start of the medieval period that were Christian.

They had been learned from others and today are considered to present the gods of the Vikings as how the Christians perceived them, rather than how the Viking themselves knew the gods they worshiped. Inspiration for the Nordic gods is believed to have come originally from the Mediterranean area, as there are many similarities with the gods the Romans and Greeks before them, worshiped.

Each of the gods had traits and characteristics, weaknesses and attributes just as humans do. However, even if the gods appeared to be human, it was crucial to the Vikings that they never forgot their importance and they did all they could to avoid their wrath.

Apart from such sources, some of the archaeological objects found tell us stories about the Vikings’ early beliefs and the pantheon of Norse gods. Thor’s hammers are a good example of this.

Thor was the god of thunder and protected Midgard – the world of humans. To do this he used his hammer, Mjöllnir, which was capable of levelling mountains. Jewellery has also been found representing Valkyries, female deities that the head god Odin sent to the battlefield to choose the warriors that were to die and bring them back to Valhalla where the Valkyries waited upon the fallen warriors forever. Also on show will be the stunning Vale of York hoard, a treasure, which contained six hundred and seventeen silver coins dating from the late 9th and early 10th centuries, as well as sixty five other items. It was only found in 2007.

One of the most important finds ever of its type, the hoard was discovered near the town of Harrogate in North Yorkshire. Its contents revealed to archaeologists that the Vikings of that time were also Christians.

The many silver hoards of the Viking period testify to access to the silver riches of the Near East, and this new wealth routinely translated into dramatic jewellery. 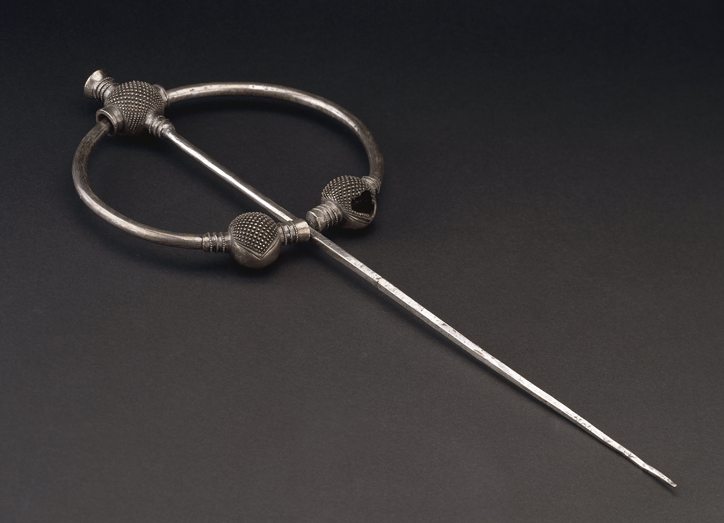 Penrith Brooch, c.900, from near Penrith, Cumbrian, England. Silver. © The Trustees of the British Museum.

The ‘Penrith Brooch’ from the Museum’s own collection, was found in 1785 by a boy busy ‘harrowing a field’ near Fluskew Pike on Newbiggin Moor.  Men wore brooches of this kind on their outer garments.

This one was both decorative and useful, a Celtic penannular brooch, worn on the heaviest cloaks or furs, although mostly for display signalling the owner’s status and wealth.

A brooch type originally made during the late Roman period, as time passed it became larger and ever more elaborate. This brooch reflects the simpler, but flashier tastes of the Vikings, who settled in Ireland and the Irish Sea area during this period. 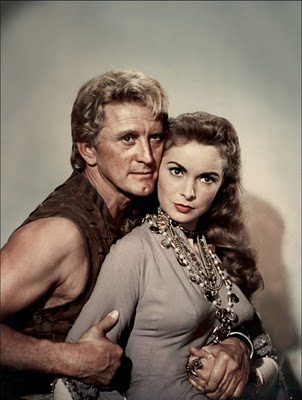 Kirk Douglas and Janet Leigh in The Vikings (1958)

It enjoyed widespread fashion across Europe and up into the Scandinavian countries, where this Celtic brooch acquired their cultural overtones.

Existing knowledge and a search for further knowledge of the Vikings was boosted by the popularity of a Hollywood movie made in 1958.

Filmed on location in the fjords of Norway, MGM’s The Vikings was a visual feast and extremely innovative for that time, featuring many popular movie stars, including the romantic coupling of movie playboy Tony Curtis with blonde favourite Janet Leigh (his wife at the time). The rugged Kirk Douglas, made up a love trio and was the star of the show.

The film also spawned an interest in all things Viking and a subsequent television series that built on the subject’s success. Courses held about Vikings invariably feature the film.

While it contained all the hallmarks of a Hollywood film of its day, lots of heroic acts, beautiful women, handsome rugged men and romantic interludes, the movie also revealed a great deal about Norse mythology and the legends that grew up around the Vikings as a warrior people.

The sight of a longship being used as a funeral pyre in the final scenes certainly fuelled the fire of their legend for fifty years. Then there is the totally divine Walrus Ivory carved Lewis Chessmen, berserkers, made in the late twelfth century, at Uig, Lewis in Scotland.

They are undoubtedly one of the most captivating collections of chess pieces yet devised and continue to carry forward the idea of them as British Museum’s goodwill ambassadors.

The cry that once used to scare the populace, has gone out once again in Britain: the Vikings are coming!

This time the Vikings are coming for a peaceful visit, one that will tell the stories of their age and their culture so that those viewing it can gain a greater understanding of the heritage that helped to shape the modern age. A major new exhibition on the Vikings, supported by BP. The exhibition, developed in cooperation with the National Museum of Denmark and the Berlin State Museum, is the first major exhibition in England on this subject for over 30 years, and presents a number of new archaeological discoveries and objects never before seen in the UK alongside important Viking Age artefacts from the British Museum’s own collection and elsewhere in Britain and Ireland.