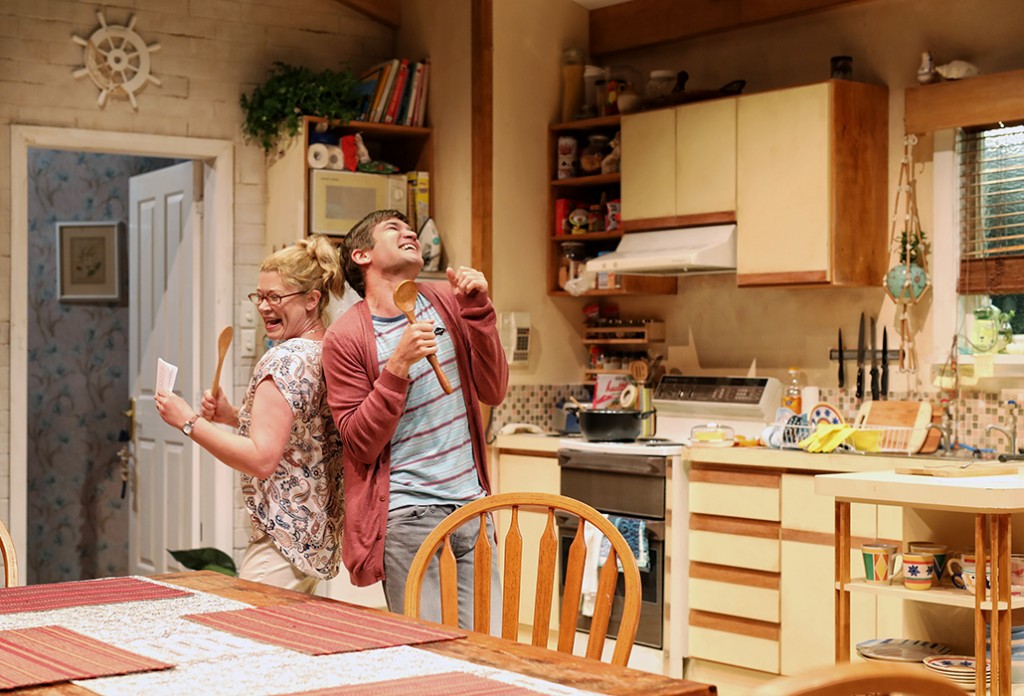 Take a tad of tradition, a pinch of dreams, a dash of celebrity, a smidgen of a palliative substance, a drop of ambition, a hint of violence and stir in a generous amount of love, all these ingredients are successfully integrated in the hilariously touching play, The Kitchen Sink a comedy where amusing incidents, humorous conversations and ludicrous plumbing errors abound. It is currently being presented at the quintessential Ensemble Theatre, Kirribilli Sydney.

Its premier production was at the Bush Theatre, London in 2011. Tom Wells from Kilnsea, East Yorkshire wrote The Kitchen Sink at the age of twenty five. This was a remarkable achievement. He was the winner of the Critics Circle Best New Playwright Award, 2011 and also the George Devine Most Promising Award, 2012. 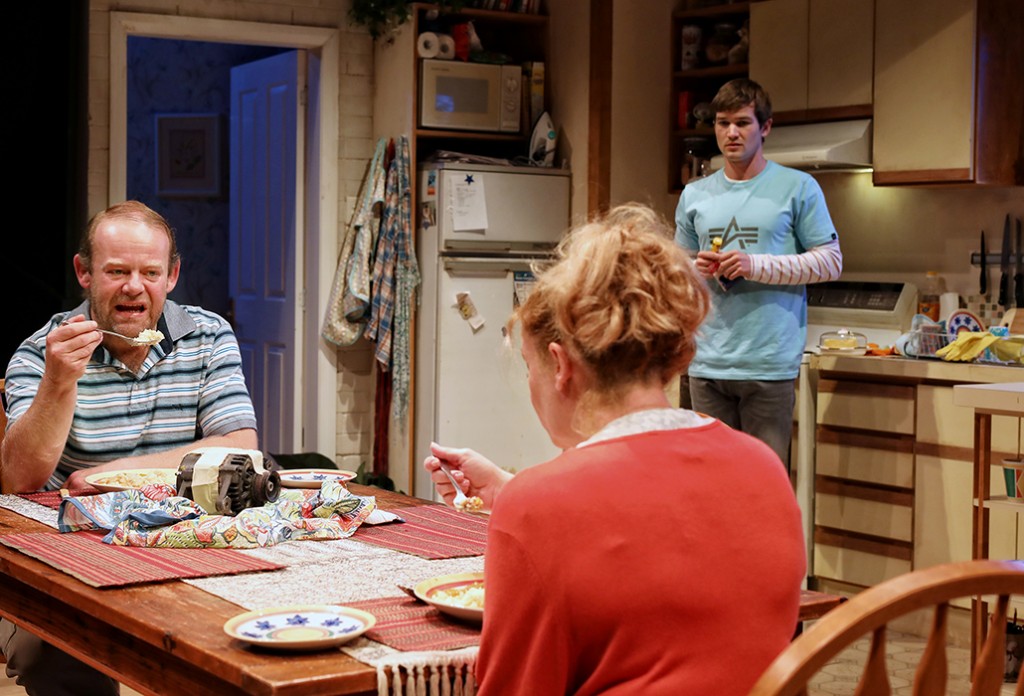 This tender and irresistibly funny play is set in Withernsea, a coastal town that’s “knackered and funny and it’s falling into the sea.”

Wells has crafted a tale of universal truths that permeate many homes across the world. He has an uncanny instinct for authentic dialogue that is genuine enough to invite the audience into the intimacy and reality of this kitchen and its revelations.

The sincerity of the concepts explored was evident in the heartfelt responses of the audience. Moments of uproariously hilarious verbal and physical exchanges, especially related to the kitchen sink and its dysfunctional state, are juxtaposed with times of deep sadness and despondency. 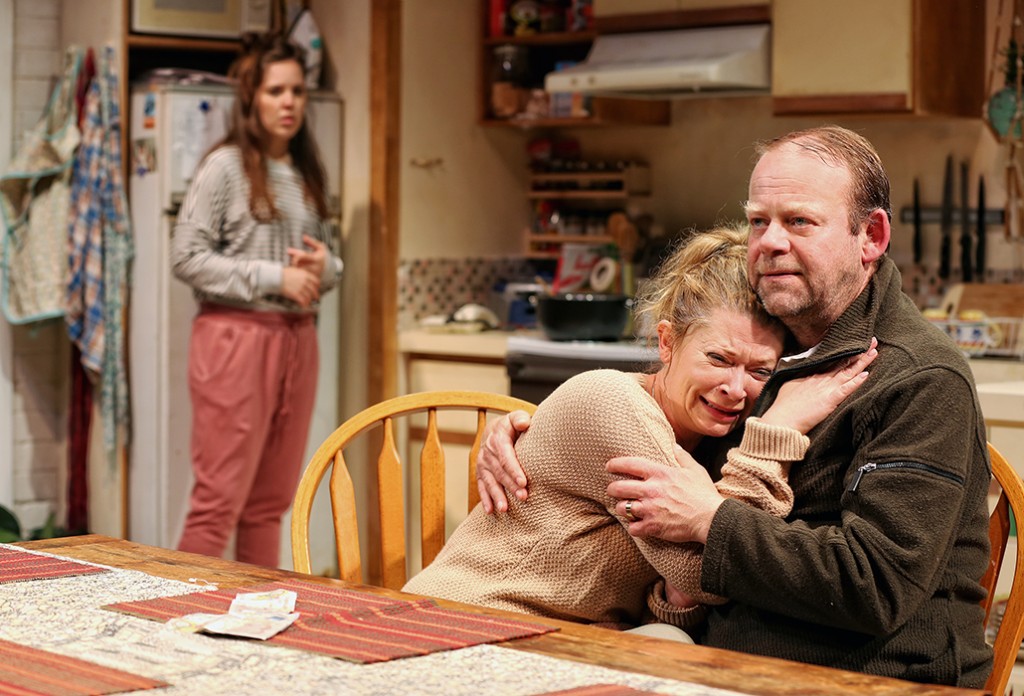 Wells is intuitive about human frailties, the restorative and nurturing power of love and the reassuring comfort of the embracing arms of family. This is a tale of optimism and the redemptive power of making small changes, especially when supported by loved ones.

Kath (Hannah Waterman), the mother is the catalyst for sustaining the family and finding solutions to their on-going problems and dilemmas. She has been a stalwart working as a “dinner lady for twenty five years.” Kath is very aware of the challenges that beset her family as she courageously and sensitively suggests its “time for a change.” 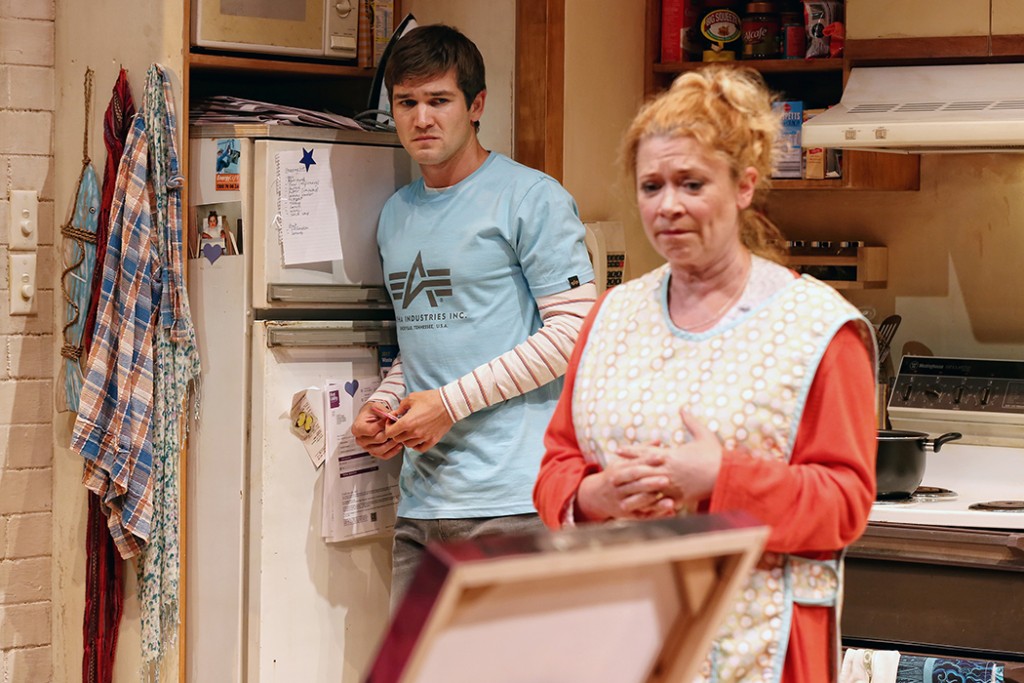 Waterman’s impeccable technique ensures she accurately portrays the role as she guides her family through their calamities with her endearing capacity for fun, wisdom and truth.

She has captured the essence of delivering the precious maternal abilities of nurturing and protecting. Waterman is able to honour a mother and wife’s love though a performance of integrity, compassion and humour. 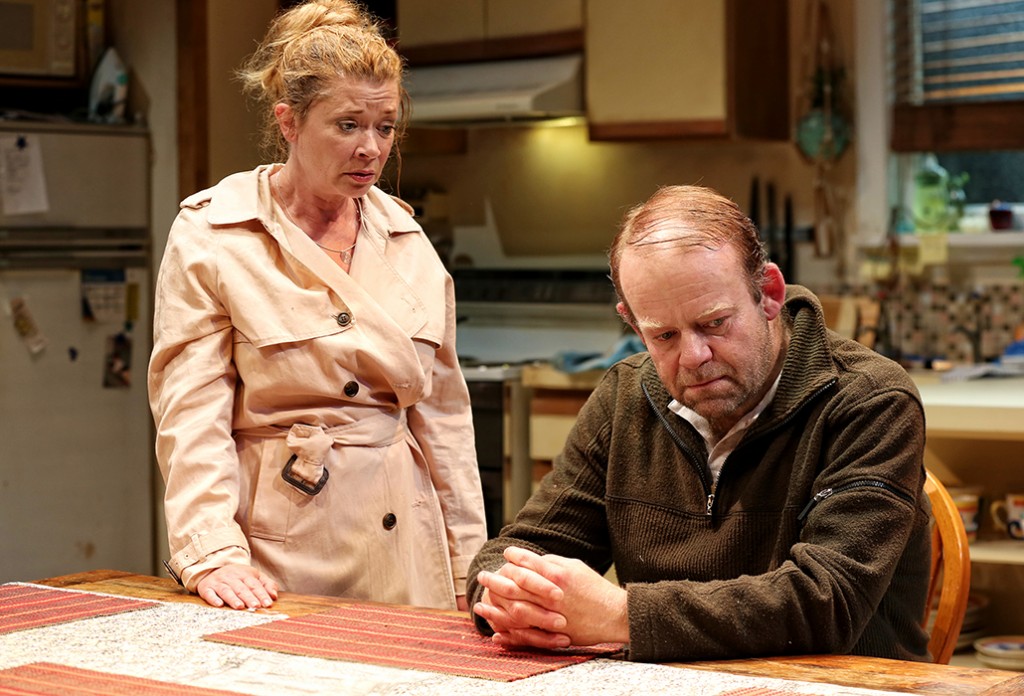 Martin (Huw Higginson) Kath’s husband is old school, still trying to maintain and earn a living from his outdated milk run. Like himself he is constantly battling the problems of an old and battered vehicle, in addition to a dwindling customer market.

He struggles with change and feels safe in the reassurance and familiarity of the past. Martin feels threatened and distressed by his wife’s proposal for change. He is tormented and fraught with insecurities about the future as he grapples with his predicament.

Higginson is a seasoned performer; his theatrical expertise underpinned a very astute interpretation of a tortured but loving man. He effortlessly depicted the varying shades of a disgruntled man on the precipice of surrendering the occupation he loved.

Interestingly he acted in this role five years ago in Hull, a little over thirty minutes’ drive from Withernsea the setting for the play. 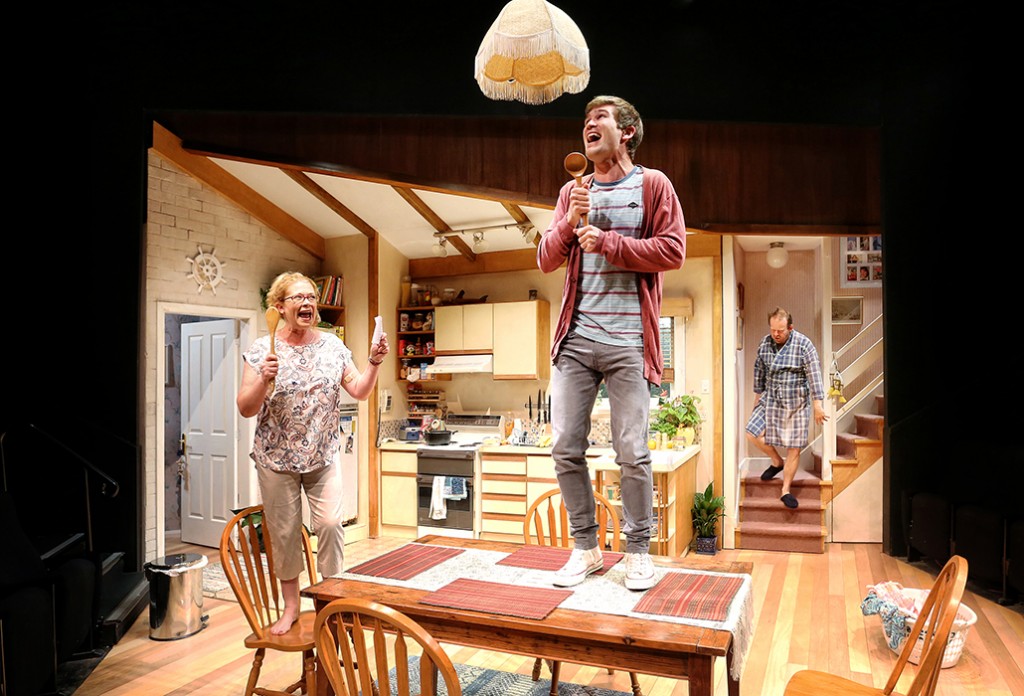 Kath and Martin’s gay son Billy (Ben Hall) is a sensitive and quirky aspiring artist. He is obsessed with Dolly Parton and dreams of being accepted into an Art School in London through a portrait of her.

Billy’s art is labelled kitsch and this disturbs his perception of his future and triggers uncertainty about his decisions.

Hall teases out the role with a whimsical mixture of quiet confidence, a placid demeanour and the passionate hues embedded in his Dolly Parton fixation. 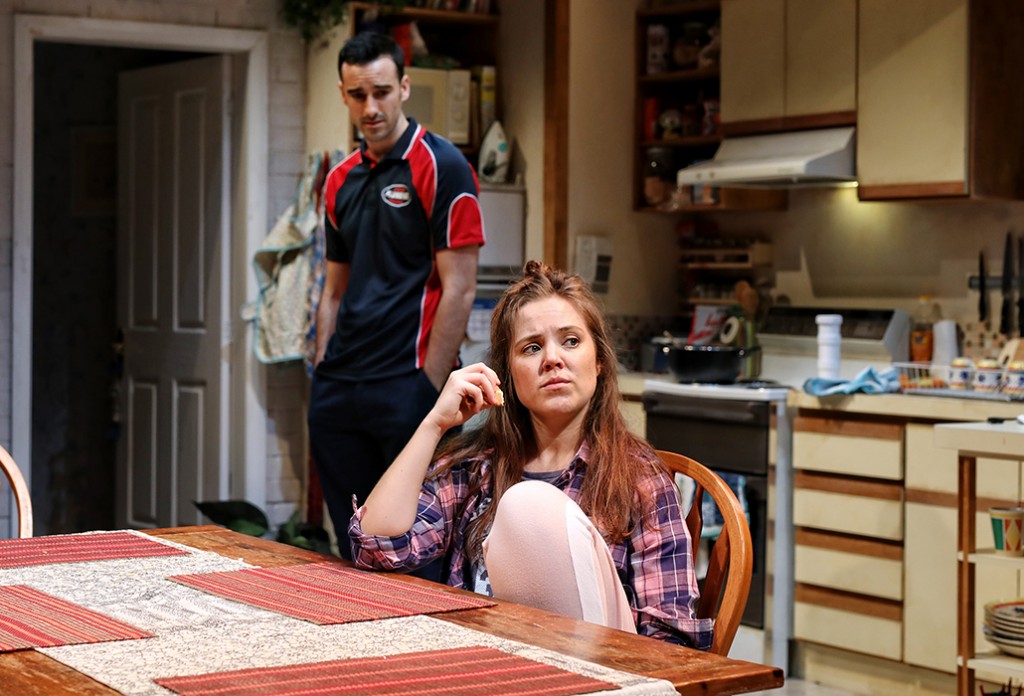 His older sister Sophie (Contessa Treffone) desperately seeks a career teaching martial arts. This desire is abruptly halted by a violent interaction when she is repeatedly labelled “feisty.”

Treffone’s performance is a standout. She uses her whole body to convey her character, capturing the spirit of belligerence, pathos and moodiness of Sophie with a sharply tuned finesse. She acts from the tips of her toes to the top of her head. Her whole body, mannerisms, movements and vocal shades espouse the lurking vulnerability of her character. 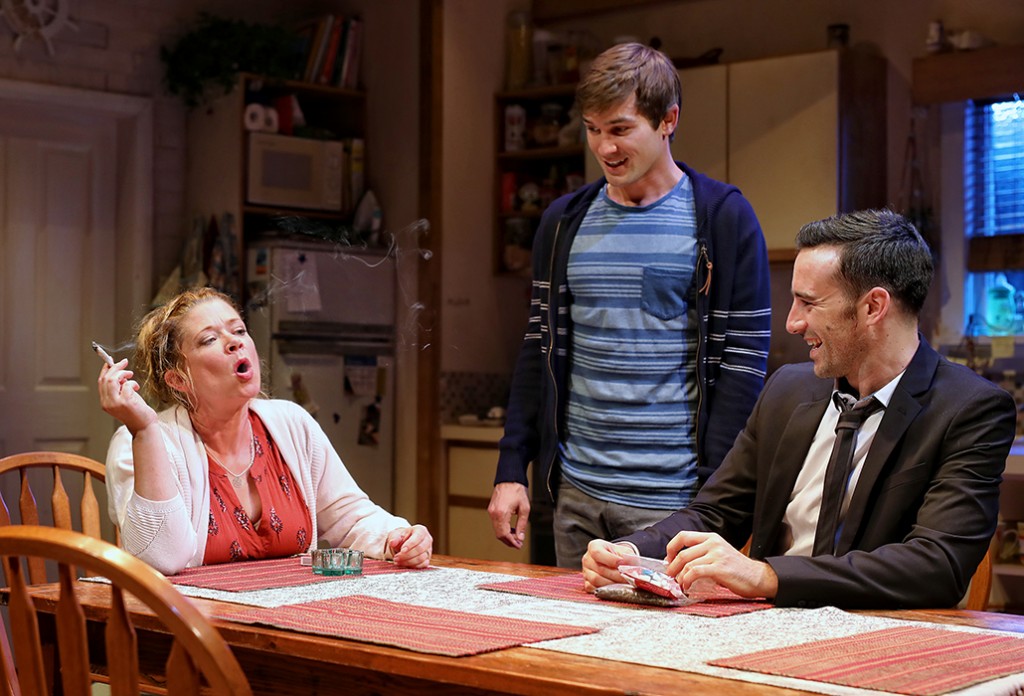 Sophie’s would-be boyfriend Pete (Duncan Ragg) is a mild-mannered plumber who lives with his aging off stage grandmother. The shy young man is besotted by both Sophie and his trade which he wishes to, “take my love of drains to the next level.”

The ensemble of very discerning performances is coupled with a skilled, innovative and insightful Creative Team.

The Director Shane Bosher has sensitively aligned the empathy and innate goodness of the play with the comical interaction in his vision and execution of this heart-warming production. 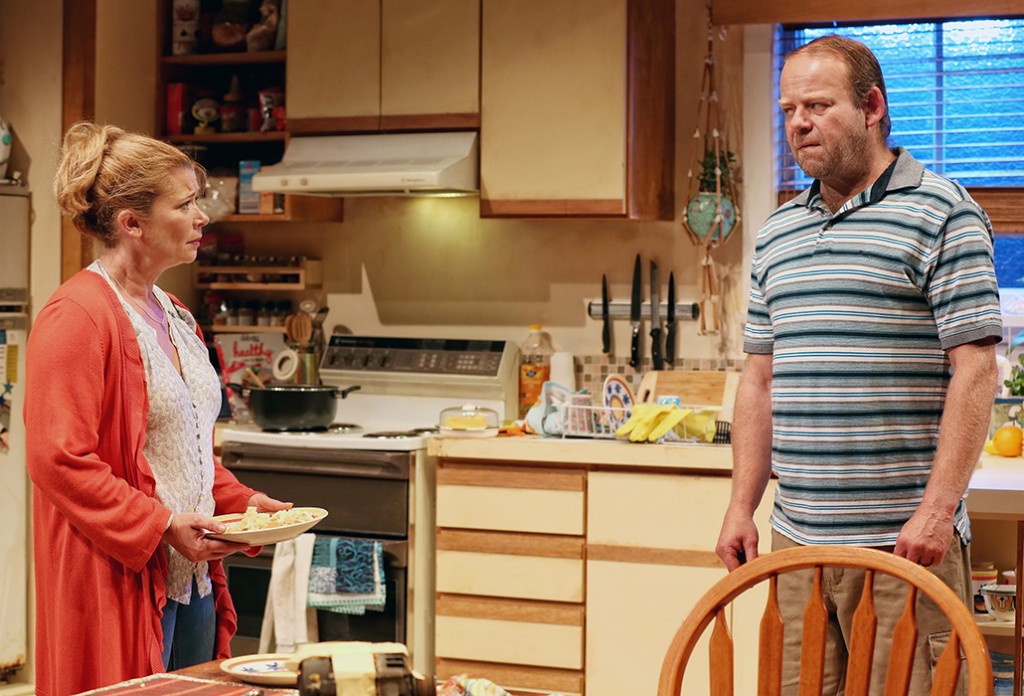 He has ensured the everyday dilemmas of the changing world are shrouded in a veil of humour and a cloak of resilience.

Bosher extracts a fluidity of movement and changing scenes that successfully yields an effortless continuity.

Charles Davies Set Designer extraordinaire has meticulously crafted a working functioning kitchen that is the core of this tender tale.

Sound Designer Marty Jamieson has employed a musical thread of deliciously nostalgic hits from Dolly Parton including Your Love Keeps Lifting Me Higher and Higher, Tennessee Homesick Blues and I Will Always Love You. 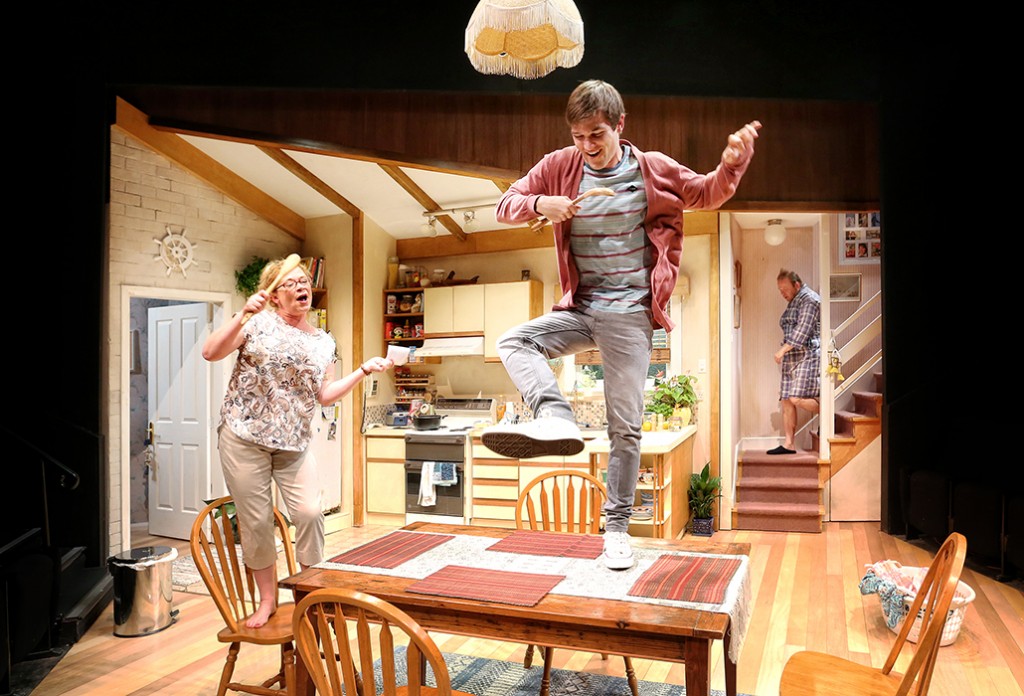 The tonal warmth of the musical interludes created a seamless transition between scenes and is beautifully aligned with Alexander Berlage’s distinctive lighting scheme.

These three Creatives have designed two simultaneous productions at the Ensemble Theatre, Buyer and Cellar and The Kitchen Sink. The cohesive eloquence of set, light and sound resonates in the collaborative energy and high calibre of their achievements.

You must see it!