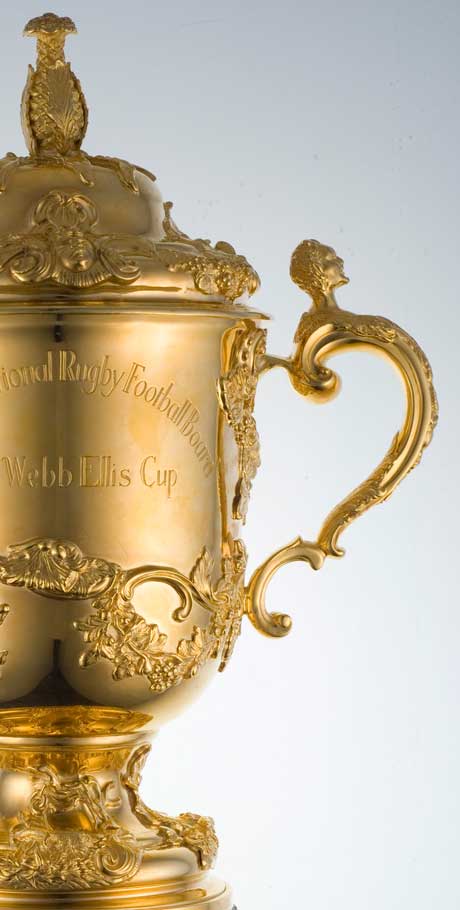 In New Zealand just prior to the Argentinians vs Romanians game of The Rugby World Cup 2011, on the first weekend of the competition a commentator seemed puzzled by a detail on the Webb Ellis Cup to be awarded to the winner. It was revealed in a close up view caught by the camera as the players ran out onto the field.

He observed aloud that it had a pineapple on the top of its cover but seemed, by the tone of his voice, unsure of why? No one around him answered or addressed his questioning tone and events moved on quickly.

So what was the answer? Does it lay with the shape of the trophy, its style, decorative elements or symbolism?

The answer is all of that and more. First, the answer to his direct question about why a pineapple is on the top is that for centuries this luscious fruit has been a symbol of welcome, hospitality and celebration.

Spanish explorer Christopher Columbus and his men brought the pineapple to Europe in 1493.

In the countries he visited in the Americas it was the ultimate symbol of hospitality and welcome. It was always offered to a guest, including an enemy.

The 38cm high silver trophy gilded in gold known as the Webb Ellis Cup (Aussies: Bill), has been presented to the winner of the Rugby World Cup since the competition series began in 1987. On the face are inscribed the words International Rugby Football Board and below that arch The Webb Ellis Cup.

It was made in 1906 by Garrard of London, appointed Royal Jewellers to Queen Victoria in 1843. Its design is inspired by that of a Cup and Cover made in 1740 by renowned English designer and silversmith Paul de Lamerie (1688-1751). His parents had fled religious persecution in France in 1685 to set up a shop in Soho at London, where their talented son was born.

The Webb Ellis Cup represents the history of the game and is at the pinnacle of the sport.

It is named for the Anglican clergyman credited as inventor of the game of Rugby – William Webb Ellis (1806-1872).

When Ellis was a schoolboy at the renowned Rugby School in England in 1823 he is said to have invented the game of Rugby by ignoring the rules and running with the ball.

While that can’t really be proved, we do know that at the Rugby School after 1845 footballers were required to exercise greater self-control as they were increasingly subjected to more stringent and elaborate rules and regulations.

The word trophy coined in English in 1550 was derived from the French word trophée in 1513, which meant “a spoil or prize of war”.

It came from the Latin trophaeum, which meant monument to victory.

Symbolism in design has been a tool for communicating ideas about philosophical and political aims for over two thousand years. There are many historic reasons to use certain motifs, but often the symbolism is not so much a conscious statement as a more subtle reflection of the style.

The Pineapple was a rare delectable luxury that did not become generally available in England until after 1720, although even then it cost a fortune well into the twentieth century. Its arrival would be significant There is a famous portrait painted by Hendrik Danckerts of England’s King Charles II (1630 – 1685) being presented in 1675 with a pineapple by his gardener John Rose.

To know what an important statement the portrait is culturally we need to understand that to germinate and grow this fabulous fruit in a climate like England meant at least two years in a hothouse.

If we also understand that to own a hot house of any description if it involved glass then you really needed to be very wealthy because glass in the seventeenth and eighteenth centuries was very very expensive.

This pineapple it seems had been grown in England by Charles’s mistress, the very notorious, luscious and lascivious Barbara Villiers, Lady Castlemaine for whom the Dukedom of Cleveland had been created by the King.

The Victorians, who loved subtle messages provided by symbolism, used pineapples as a decorative element in architecture.

They incorporated them into the plasterwork of the main meeting salon, where they were a sign of welcome. Having the Webb Ellis trophy standing in all its glowing gilded glory on a pedestal at the World Cup is also entirely appropriate. The pedestal was elevating it above the commonplace, like a work of art indicating its importance.

The whole idea of giving a trophy to a winning side in a sporting arena comes out of traditions established in ancient times for that of rewarding those victorious in both sporting and military manoeuvres.

In ancient Greece men with sporting prowess competed for many reasons, including honour.The prize in ancient Greece was an olive crown made from an olive tree sacred to the great God Zeus, which stood at the rear of his temple at Olympia surrounded by a fence.

The ‘good men’ in every polis or city were men of leisure, active in sports and outdoor pursuits if only as part of they’re military training.

They subscribed to a strict code of conduct, one that had been thrashed out over the centuries.

It required them to be truthful, trustworthy, courteous (even to their enemies), courageous, respectful of the rights of others, generous with their possessions (as far as their means would permit), immune to the temptation to cheat, and finally, to be proud of the code itself.

This is an ideal most sporting institutions still adhere to and strive for today around the western world. Those charged with choosing the trophy for the new Rugby worldwide competition when it was being founded apparently wanted a cup that would make a powerful statement.

When this 1906 gold number was removed from the safe at Garrards they were delighted. Richard Jarvis, Managing Director of Garrards brought the Cup down from the vault.

Eventually Ronnie Dawson of Ireland, Keith Rowlands of Wales, Bob Stuart and Dick Littlejohn of New Zealand and the Australians Nick Shehadie and Ross Turnbull approved the choice and they named the trophy ‘The Webb Ellis Cup’.

Paul de Lamerie was a renowned English artisan of the early decades of the eighteenth century. The cup and covers he designed were similar to many found in architectural settings in both Greek and Roman antiquity.

The originals were usually made of clay with carved relief sculptural scenes of local cultural importance and relevance.

It was in the eighteenth century in England that the two-handled cup and cover developed into a ceremonial object, rather than a functional one. Covered cups were an ideal grand gift, and became a popular choice as a prize for sports, particularly to be presented to all male institutions and societies. 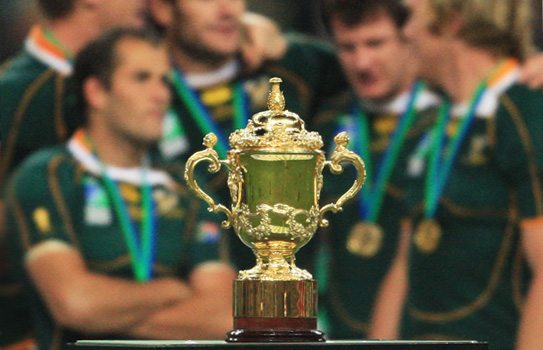 Because they were always treated as treasured heirlooms, many of them have survived. With its form and shape based on ideas from classical antiquity the Rugby World Cup trophy has two cast scroll style handles. On one handle perches the head of a satyr and on the other the head of a nymph.

The Satyr in mythology was usually strongly built, with long curly hair and a full beard, much like many of today’s footballers. He acquired a ‘goat like aspect during Roman times and was considered roguish and faint-hearted.

He loved physical pleasure and dancing with nymphs. A nymph is on the other handle and represents the beautiful spirit of nature, forever safe from the more randy aspirations of the goat-man.

An interesting account of a pineapple as a symbol of luxury: in the early 1980’s a decorative arts lecturer from London came to live at Sydney. Throughout the 70’s she had worked in Sotheby’s auction house at London. She told me each week when she received her wages she would put a few shillings in a jar. At the end of the month she would go on a journey to Fortnum and Mason to purchase a pineapple. She would peel it and then slice it into enough pieces so that she could enjoy one every day until the next month. When she decided to come to Australia to live and work for a decade she was flabbergasted to discover she could afford to buy a pineapple every day. When Paul de Lamerie was making his cup and covers he applied his decorative motifs to a plain body and lid, including C and S scroll motifs, used extensively during the asymmetrically disposed Rococo period at France. As well swagged vines loaded with grapes men enjoyed the wine from the grape at all their celebrations.

The terminals on the cup are a bearded mask, a lion mask and a vine.

Common to most cultures, masks are important symbols of ritual used to disguise a person who presides over important ceremonies.

It is all about helping to mediate with the spirits; protect a society from those who abuse power; protect the wearer from harm and most especially those involved in highly physical engagements such as sport and war.

The Vine is a very powerful image, revered by the ancestors of many different cultures. Today it could be said to join the realms of the sacred and secular together through its powers of symbolism, which were used to explain and help ancient people understand the complexities of human life. It is a potent symbol of death and rebirth and of those forces seen to control human destiny. Since the founding of The Rugby World Cup the Webb Ellis Cup has become for many cultures, a deeply embedded symbol of social wellbeing and the enduring spirit of sportsmanship.