Things that go bump in the night or inanimate objects which suddenly leap into life have never really piqued my interest until I read Michael Schmicker’s new book, The Witch of Napoli, which is among the top 100 best sellers on Amazon.

Suspenseful and a huge amount of fun the central character is Alessandra Poverelli, a medium whose skill at contacting the spirit world has come to the attention of believers in psychic phenomena and sceptics who aim to prove Alessandra is just like all mediums – a fake.

Of historical interest The Witch of Napoli is set in Naples in 1899 amidst a lively, mostly poverty-stricken Neapolitan society eager for the next sensational event to be reported in lurid detail by tabloids of the day.

The story is narrated by Tomasso Labelli, a young photographer, who attends a Spiritualist séance. He is hoping to improve his standing with his newspaper editor by taking photos which pander to the public’s latest fad: communicating with the dead.

He is not disappointed.

The séance is conducted by the unconventionally beautiful medium, Alessandra Poverelli. Alessandra has garnered a rep amongst wealthy recently bereaved Neapolitans as a medium who can deliver and deliver Alessandra does – when the table she is sitting at levitates Tomasso clicks into action and takes a shot which changes both their lives forever.

Alessandra and her ability to invoke the spirit world captured in black and white, Tomasso’s photograph is front page news and so is Alessandra.

Camillo Lombardi, a wealthy Jewish psychiatrist, arrives in Naples to investigate. Camillo convenes a séance to see whether Alessandra has the gift of second sight or whether her gift lies somewhere between trickery and illusion.

Convinced Alessandra is the real deal when the ghost of his dead mother makes an appearance, Camillo puts a proposal to Alessandra: he will finance a tour of the Continent, to prove to scientists and sceptics alike that her psychic powers are genuine thereby establishing a new branch of scientific research.

Alessandra’s mother died when she was six years old, her father, murdered not long after, she escaped village life to live a precarious existence on the streets of Naples. This tragic beginning to Alessandra’s life is compounded by her marriage to the local Mafia boss, Pigotti, a thug who beats her and steals the money she earns from séances.

Author Michael Schmicker (pictured) has provided a creative description of late nineteenth century to early twentieth century European life skilfully and convincingly written, the séances are both intriguing and exciting.
Camillo offers Alessandra a fee to accompany him on the tour – the payment, enough to start a new life in Rome away from the brutal treatment of Pigotti, Alessandra accepts provided Tomasso, who has become a good friend, goes with them to document and photograph their progress.

Camillo agrees and the trio set off. Newspapers across Europe herald her seemingly amazing powers – tested by scientists Alessandra succeeds where others have failed, her gift for supernatural communication unable to be faulted.

What is unusual is the author’s choice of mostly modern day language in dialogue between the central characters. Difficult to do when the text setting is historical it didn’t grate with the time period and ensured the plot was fast paced and easy to understand – good writing. After a few setbacks, romance begins to blossom between Camillo and Alessandra and it seems as if Lady Luck has finally looked her way.

A cloud though does appear on the horizon in the form of Nigel Huxley, a detective for England’s Society for the Investigation of Mediums. Nigel’s a nasty piece of work who travels the world with the prime objective of debunking psychic phenomena et al.

Despite Camillo’s objections, Alessandra accepts Nigel’s challenge to travel to England to have her supernatural powers tested. The tarot cards predict a debacle and they are right – Alessandra, desperate to win the challenge does something really silly and her dream of a happy life is shattered.

The Vatican, in order to discredit Alessandra’s gift begin to investigate her early life – with Pigotti hot on her trail, storm clouds threaten; will Alessandra, a woman of little education but great courage triumph?

Alessandra Poverelli’s character based on the true-life story of celebrated Italian medium Eusapia Palladino (1854-1918) (pictured), The Witch of Napoli’s conclusion is like the rest of the story – a great read.

I asked Michael Schmicker the questions below on his research and connection with the paranormal:

Q1.) What prompted your interest in ESP and psychic phenomena?

Heretical hypotheses about the nature of reality don’t frighten me – I majored in philosophy in college, taking mind-stretching courses like epistemology (what is truth?), and ontology (what is reality?). In ontology class my freshman year, the professor read us a wonderful poem called “Chuang Tzu and the Butterfly,” written by the well-known Chinese poet Li Po. In it, Chuang Tzu falls asleep and dreams he is a butterfly. When he awakes, he asks himself the question, “Am I a man who dreamed I was a butterfly, or am I now a butterfly dreaming I am a man?” Think about it for a minute. How do you scientifically prove you’re not the latter?

After college I became a journalist and worked as a crime reporter for a year before joining Peace Corps in 1969. I taught English at a Buddhist monastery school in Bangkok, and moonlighted after hours for the Bangkok World newspaper, penning feature stories for their Sunday magazine. One week, I decided to interview a famous Thai fortune-teller, Khun Mae. She turned out to be a warm, friendly lady in her 70s. She produced some exceptionally accurate information about my past life, and some jaw-dropping predictions about my future life which came true.

It was my first and only personal brush with the paranormal, but it led me to talk about it with my family. That’s when I discovered that several members of my family had had paranormal experiences. I was an investigative journalist, so I decided to see what solid, scientific evidence I could uncover suggesting the reality of paranormal phenomena. That research turned into my first book “Best Evidence.” The book earned strong praise from academics and scientists in the field, and led me to co-author a second book, The Gift: ESP: The Extraordinary Experiences of Ordinary People.

Psychic phenomena is quirky and unpredictable; frustratingly elusive, it’s hard to replicate in a laboratory, but it is real. Sure, the field is rife with fraud and hoaxes, wishful thinking and self-delusion, but the best evidence for the paranormal is quite strong. 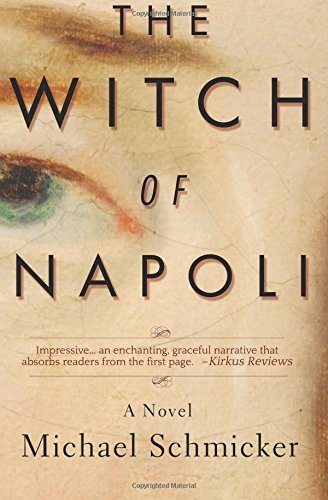 Q2. Did you feel the hand of real-life medium Eusapia Palladino guiding your writing of The Witch of Napoli?

That would have been fun! Unfortunately, I had to face the blank page alone. But she certainly inspired me to write her story. I came across her while researching Best Evidence. Scientists today are still arguing about whether she was genuine or a complete fraud. She was caught cheating multiple times, yet she also produced some of her most amazing psychokinetic feats under extremely strict scientific controls.

Eusapia was such a wild woman — fiery-tempered, amorous, vulgar, confident – in a Victorian age where respectable women were insipid saints on a pedestal, stunted socially, sexually, intellectually and economically. She allowed strange men to sit with her in a darkened room holding her hands and knees and legs (“proper” women would have fainted, or thrown themselves off a precipice, if caught in that situation). Eusapia was also extremely kind and generous to anyone in trouble, loved animals and gave to beggars. She had a gift and believed in it and I thought she’d make a hell of a heroine for a novel.

If consciousness survives death (and there’s some solid, scientific evidence suggesting it does), I’d love to meet her on the “Other Side.”

A vacation. It took me almost two years to research and write The Witch of Napoli. I need a break. When that’s done, I may try to write a full screenplay based on the novel.

I originally wrote The Witch of Napoli as a 15-page film treatment (I studied documentary film at New York University and at the British Film Institute). I’m convinced my book would make a great Hollywood movie. Agents have told me the way to do it is to write the novel first, then option the book. I didn’t want to write a novel – I’d never written fiction before and historical fiction raises the complexity another level. Where do you find information on the cost of a plate of pasta in 19th century Napoli? How much history should be included? Frankly, I was scared stiff. But I finally took the leap. Now that The Witch is up on Amazon, I’m glad I jumped; somewhat surprised I survived, I am extremely appreciative of the many positive reviews it has garnered. Best of all, I’ve got a book I can pitch to Hollywood producers. Thanks to author Michael Schmicker for an interesting insight into the story behind the research and creativity that went into the writing of The Witch of Napoli an exciting page turner that had me revising my thoughts about the power of the paranormal… spirits, if you are around, I’m open to persuasion.

The Bodleian Libraries at Oxford in England have announced the newly acquired letters of renowned Czech author Franz Kafka (1883 – 1924) to his favourite sister Ottla, who died in the death camp at Auschwitz during World War II, are on public display for the first time.