Detail of a wave of water at Toowoomba, 700 metres above sea level

Culture is a human process. It is about the ordinary menial things in life and about the things that hurt. All around the world and in many different cultures there is a great deal of hurt happening this Christmas-New Year season.

While we are battling floods and fire here in Australia others are dealing with the damage and deaths caused by unbelievably heavy falls of ice and snow. It is an era of nature and her extremes. And, it is all terrifying stuff.

Here in Australia, in their indomitable style, its people are rallying together. After years of being in drought we are now in flood in the eastern states of Australia, while the west is battling the ferocious flames of a bushfire unbelievably, deliberately set.

In Victoria prior to Christmas vast areas of the state were under water as rivers and creeks burst their banks from much higher than predicted rainfall, which caused a great deal of damage, distress and a number of deaths. Many of the communities were still recovering from the dreadful fires of 2009/2010 season and now they were under flood. It all seemed pretty unbelievable. But as soon as the waters started receding in Victoria the situation changed, as the north of our country also felt the hand of nature’s fury.

Since Christmas residents of Queensland, one of the five states of Australia, have been dealing with devastating floods over an absolutely huge area.

For people outside Australia the area affected is as big as France and Germany together, which may seem for many virtually impossible to imagine. For the people who live in this vast continent, who are used to its immense distances, while conceivable it is still very hard to absorb. While terrible these floods were at least predictable and the inundation happened over a period of time, allowing people time to evacuate and escape to higher ground.

But if this wasn’t enough yesterday a wall of water, a flash flood said to have been eight metres high, hit one of the south east of Queensland’s high hill towns. 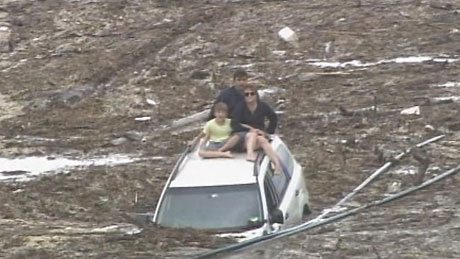 Pictures: Seven Network Source: The Australian - Family on their car during the wall of water that rushed through Toowoomba. Help doesn't seem enough to say

Now this seems for the majority of people who have been to Toowoomba, completely unfathomable. Just to reach this normally delightful city and its environs which is perched high above the lovely Lockyer valley on a pleasant plateau, you have to make a near vertical climb in your car for more than half an hour.  It’s the sort of place you imagine evacuating too if the predictions of scientists about global warming, happen as it is 700 metres (2,300 ft) above sea level.

Toowoomba has built a reputation over many years as the garden city of Queensland. With its fresh mountain air, rich volcanic soil, this lovely place high up on the top of the Great Dividing Range has been an ideal location for the cultivation of some of the most magnificent park and garden settings in Australia. It is our second largest inland city, and largest non-capital inland city. So if it is now susceptible to raging torrents of water too then it is impossible to think of what has, or will happen to the millions of residents living below.

Witnesses likened the disaster yesterday to that caused by a tsunami or a cyclone of huge magnitude. People were swept out of their cars in the main street of the city as the huge wall of water hit without warning. They tried to escape it by climbing on the roofs of their houses and cars, but there were eight deaths and many more are still missing. 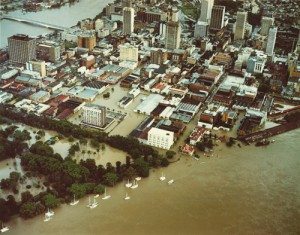 1974 at Brisbane set a record, which may now be exceeded

As I am writing this I am listening to an extended coverage of this disaster on a monumental scale.

The fear is that there is much more to come as Brisbane, Queensland’s capital prepares itself as the water as much as in Sydney harbour, rushes towards it.

The floods of 1974 devastated Brisbane for a decade following their fury and this is predicted to be a similar event. It is hoped the preparations and precautions taken by the council and government since, against such an event happening again, hold up and that all my colleagues, friends and family who live there will be safe. As I write this they are either sandbagging or evacuating their homes.

Adversity brings us together in times of peril and it is what makes us strong. However everyone’s strength is being stretched to its limits with the rain, terrible events, evacuations and tragic stories that will continue to unfold this summer in Australia as nature unleashes the full force of its fury.