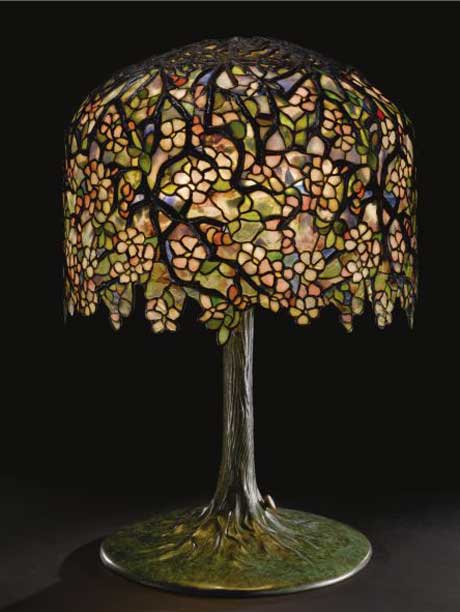 Charles Louis Tiffany (1812-1902) founded his now famous firm Tiffany & Co at New York in 1837. He began by selling tableware and jewellery from American manufacturers with imports from the firm of wealthy art-loving patron Samuel Bing (1838-1905) whose shop L’Art Nouveau” at Paris was all the rage. Edward C. Moore (1827-91) designed silver for the firm from 1851, becoming chief designer in 1868. As a pioneer collector of Japanese art Moore transformed the firm so that it was at the forefront of Japonisme style and techniques  and the wares produced were truly innovative.  Tiffany’s also explored native styles taken from American Indian patterns for international exhibitions in the United States. Their Silver was highly acclaimed at the Paris exhibitions of 1867 and 1878. Louis Comfort Tiffany (1848-1933) became artistic director in 1902 and founded the Society of American Artists in 1877 and Associated Artists in 1879. From 1885 he designed fabulous stained glass windows made by the Tiffany Glass Co. In the 1880s he developed the divine iridescent ‘Favrile’ glass, which was also sold through Bing’s Maison de L’Art Nouveau in Europe. In 1895 the first Tiffany lamp was launched, designed not by Louis Comfort as always supposed but Clara Driscoll, whom the firm employed. The NY Times revealed in 2007 scholars had accidentally discovered a cache of letters shedding light on this talented woman, who for so long had remained on the sidelines of decorative arts design history.