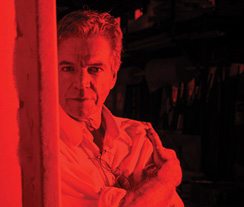 The Queensland Theatre Company is currently presenting RED, the six time 2010 Tony Award winning play starring Aussie actor Colin Friels in the role of the most controversial American modernist painter of the 20th century, Mark Rothko. Written by John Logan of Skyfall, The Aviator, Hugo and Gladiator fame, this will be a provocative portrait of the artist who contrasted scenes of violence with those depicting civilised passivity, a confusion of past and present. Scottish born Aussie Colin Friels (1952), whose family moved here from that northern clime in the swinging sixties, has had a career in the Australian theatre and television, including guiding our kids on Play School. In 1986 he won acclaim and the AFI award for best actor for the title role in Malcolm, a lovely movie about a shy mechanical genius and his career in the Australian theatre has seen him playing a wide range of roles and characters. No 14 by Mark Rothko courtesy SFMOMA

Rothko was of Latvian Jewish descent, an abstract expressionist who had both a challenging life and career, and that’s putting it mildly. He ended his own life by suicide. Colin Friels breathes life into the tortured artist as he broods and seethes, painting himself into a corner. This aspect of the story takes place in the 1950s when Rothko took a commission – a series of paintings to decorate the swanky Four Seasons Restaurant in A new steel-and- glass monument to corporate modernism, the Seagram Building on Park Avenue New York. He forged his art as a weapon wanting to “ruin the appetite of every son- of-a-bitch who eats there” – but in 1959 stormily reclaimed the paintings giving back the money. The catalyst of that event went with the abstract expressionist to his grave. It’s the mystery explored with stunning intensity in RED: Buy Tickets Here. 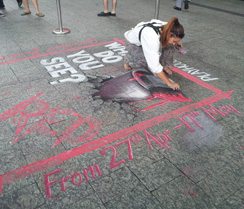 Margaret (Alterator nee Schofield) God bless her, carried on the best traditions of baking when she came to live in the city of Sydney at the end of World War I