Music so often pervades our lives, as the art of singing constantly evolves with Opera sensitive always to both its time and place, expressing emotions and telling a story about good and evil lyrically and with either the influence of poetry, or as in this case, politics.

Having always lived life for art and for love the feisty Italian singer Floria Tosca is not sure how to answer the pivotal question about ethics posed as she finds herself in an unenviable position of being blackmailed into betraying her lover, and ultimately herself, in this dramatic work set during a time of war.

At the opera great arias such as ‘Vissi d’arte’ by Italian composer Giacomo Puccini (1858-1924) are an important aspect of the communication between characters with each other and their audience.

However perhaps none have been more breathtakingly beautiful, or perhaps even more sublimely performed than this show stopper, especially when sung as it was by Viennese soprano Martina Serafin in Act Two of Tosca on opening night at Melbourne, November 12th, 2014.

In Opera Australia’s powerful presentation of John Bell’s production of Puccini’s Tosca Martina Serafin served her art in scintillating style, with a voice of such clarity and beauty the crowd went wild with both appreciation and delight.

Melbourne people certainly love their art forms and they took this production, and it’s cast and crew to their heart.

Stunning set design by Michael Scott-Mitchell showcased this dramatic work or art in music, which was taken to maximum levels providing great pleasure in the art of theatrical performance. 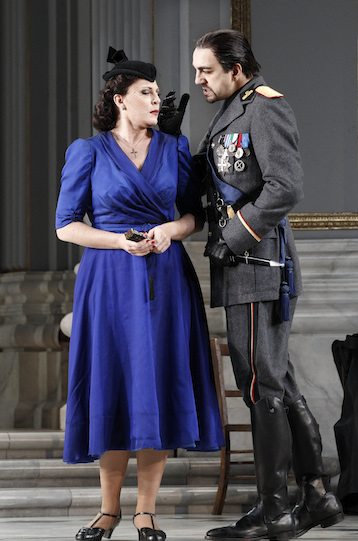 Tosca is all about how petty jealousies and misunderstandings as well as a lack of trust can so easily bring us down, especially when faced with the dichotomy of dealing with and balancing personal feelings of love on one-hand, with ideological revolutionary political ideas about freedom and justice on the other.

Scenes of physical and psychological torture are stunningly highlighted by Puccini’s mesmerizing music and the simply splendid voices of its two main characters, Floria Tosca sung superbly by Martina Serafin (until 29th November) and her lover Cavaradossi.

His role was performed passionately by Mexico’s warm and wonderful tenor Diego Torre, who grew in confidence as he pursued a pathway strewn with the high ideals he embraces, as he endeavoured to save his friend Angelotti, sung splendidly by Steven Gallop, from death.

Awaiting execution in Act 3 in a very bleak goal Cavaradossi, sings “E lucevan le stelle” – “How the Stars Shimmer” when reflecting on his life and his love for the love Tosca, and how it has all come to nothing.

He sang this extraordinary work with such depth of feeling and heart rendering passion on opening night that all the hairs on my arms quite literally stood up in acclamation, long before the thunderous clapping began and the standing ovations the cast enjoyed at the end, started.

Composed at the time of Napoleon’s invasion of Europe, this tale of tyranny, a manhunt, interrogation of prisoners, sacred spaces, prayers and power wielded cruelly, ends with a kiss of death.

This is finally delivered with conviction by Tosca, when her prey doesn’t see the knife glinting behind her back. Sydney’s most famous landmark producer of grand Shakespearian events, John Bell AO OBE has transposed the story forward in time and set it in the 20th century and to the Nazi occupation of Rome. Updating opera productions to ensure they remain theatrically relevant is a new role John Bell takes seriously. He is interpreting and serving opera for the new age with the same passion as for the stunning Shakespearian productions imagined for much of his own life in art.

As opera became an important and integral aspect of many people’s lives from the mid eighteenth to the mid nineteenth century, it awakened the ever expanding bourgeoisie of Europe to the considerable pleasures of theatrical performance.

Many new composers inspired and motivated the expansion. Puccini’s Tosca has made the metamorphosis to our modern times well, although some of the societal ‘attitudes’ remain firmly rooted in their early 19th century past.

World War II is an apt modern setting as Hitler’s dreadful examples of tyranny enacted against many innocent people punctures many still very raw nerves and it certainly makes it real.

The ‘evil’ Scarpia’s role is sung by Italian baritone Claudio Sgura with a great depth of darkness, conveying the emotion Puccini weaves into all of his music that goes pierces the heart and goes all the way down to the soul.

He’s not at all swayed or affected by the pleading of Tosca as she tries to free her lover the painter Cavaradossi from his clutches, because Scarpia only lives for the moment and the instant pleasure he gains from the power he wields.

Luke Gabbedy sings the role of the Sacristan, Spoletta, by Graeme Macfarlane, Sciarrone by Adrian Tamburini with Angelotti, performed by Steven Gallop. They all equip themselves with great distinction, backed up by the Opera Australia Chorus, Opera Australia’s Children’s Chorus and Orchestra Victoria playing like the powerhouse musical performers they are under the skilled baton of Andrea Molino.

The Spring Summer Season for Opera Australia is off to a great start. Would certainly be interesting to also enjoy the performance Australian award winning soprano and very talented siren of song Jacqueline Mabardi in this sought after lead role.

The only negatives for my opera buddy and myself on reflection was that we would have liked the Nazi’s to be a bit more steely and menacing- they were after all renowned for their cruelty. This was a body language thing.

Also, while I understand that the costume historically has been both impeccably researched and presented, the outfits worn by the two leads in Act 1 didn’t work visually for me in that setting.

In Acts 2 and 3 by way of great contrast, they did and quite splendidly. Overall, the music and the superb singing is an overwhelming positive. Act 1’s great remodeling of the interior of a sacred Roman Catholic space on stage was achieved with great impact and style and powerful attention to detail.

From the auditorium the ‘faux’ Carrara marble contrasted wonderfully with the ‘Tiffany’ type blue of the walls set off by the overwhelming glamour of great golden gilded capitals and selected highlighted details. Act 2’s great room as a reflection of modernity was for me the most powerful setting, the vast glass windows, muted shades, harder edge furnishings, military uniforms and trappings contrasting with Tosca’s glamorous glittering costume contributing to the increased power of the cast and their performances. You could see them visibly rise to the challenge of not being in the seeming ‘secure’ surroundings of a church! (Although in history this has often proved to be not the case).

It was noticeable that in the more sophisticated setting they really shone. Act 3-gaol setting was as grim as it should have been, with Tosca’s final demise on the ‘barbed wire’ fence, a terrible destructive barrier used throughout World War II zones so effectively, making the final point perfectly.

This was a powerhouse performance of passion, politics and breathtaking musical and visual virtuosity and beauty.

Be sure to catch Opera Australia’s powerhouse presentation of John Bell’s and Puccini’s wonderful tale of Tosca.