Beauty and innovation were important aspects of La Belle Epoque, that era in Europe from c1890 to1914 when France and its European neighbours were at peace.  It was a time of political contrasts.

A working class militancy and organized socialist movements built on the ideals of liberty, equality and fraternity contrasted dramatically with the reality of intense and systematic discrimination between the sexes and other cultures. Yet it is remembered as a ‘golden age’.

It is a period where art and design flourished and music became accessible to a wider  audience than ever before with the invention of the gramophone and lovely melodies and romantic songs performed in the Salon could be recorded.

In Paris the Cabaret and Can Can thrived and the term impressionism was given to a new style of painting whose deft brushstrokes amd colors emphasized light in its changing qualities.

A bohemian artist of this late 19th century period at Paris, Henri de Toulouse-Lautrec (1864-1901) may have captured the spirit and emotion of the so-called ‘beautiful era’ in his works, however his own ‘louche lifestyle’ was far from being ideal and certainly not beautiful.

He became best known for his portrayal of the many highs and lows of his own short life, which was led in the winding, narrow haphazard streets of Montmartre where he resided. 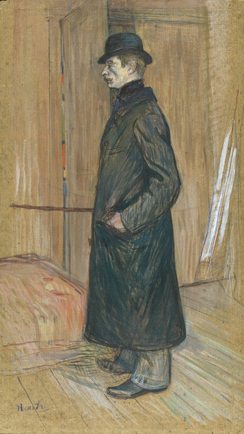 Toulouse-Lautrec’s journey was one of continual pain and torment, with an affliction that did not allow his legs to grow as nature had intended and he turned to alcohol to relieve his pain, which was both physical and emotional.

He set himself up as a quintessential recorder of the society and culture of his own arrondissement, which was filled with colourful people and decadent haunts.

In the process he became the biggest character of them all, renowned for his self-deprecating wit, empathy, sympathy and fascination for those marginalised by society, especially the women in his life. As he did, they mostly lived their lives on its fringe.

Having studied art in the ateliers of Léon Bonnat (1833-1922) and Fernand Cormon (1845-1924), who had also taught the his colleague Vincent Van Gogh, Henri started out by painting impressions of the people of his neighbourhood, posing them by day in a nearby photographer’s garden.

An important innovation of the generation older than Toulouse-Lautrec was an all-new lithographic technique that allowed for an expansion of creativity.

Armed with his skill as a draughtsman and his willingness to experiment with bold composition, he set out purposefully to revolutionize poster design, depicting barmaids, clowns, prostitutes and cabaret stars, all of whom generally display a detached interest in the individuality of the human being. 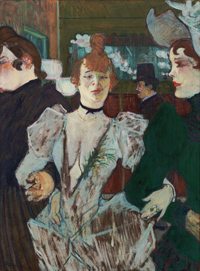 When three thousand copies of his Moulin Rouge: La Goulue (the glutton) poster was pasted all over walls around Paris, Toulouse Lautrec became an overnight sensation.

The Moulin Rouge, with its landmark red windmill surmounting the building, constructed in 1889, had quickly become a regular gathering spot for all those seeking fame or wanting to see and be seen as an integral aspect of the Parisian creative class.

His genius established him as the premier poster artist of his day and elevated his painterly style. Depicting the dancer Louise Weber, renowned for creating the now famous French dance the ‘Can Can’, Toulouse Lautrec’s poster was far more daring than any previous works in that style.

The popular cabaret was nearby to Lautrec’s district of Montmarte and housed the courtesans, who became renowned for their high kicking dance review, attracting visitors from all around the world. Henri Toulouse-Lautrec was born in the Midi-Pyrenees region of France, the eldest child of an aristocratic family who had fallen on hard times.

The congenital health condition that caused his ‘dwarfed’ legs is known medically to be the result of a century of inbreeding, his parents being first cousins.

Unable to enjoy the activities most of his peers indulged in and enjoyed, he turned to art, immersing himself entirely in the late 19th century artistic lifestyle at Paris and he became an important Post-Impressionist painter, Art Nouveau illustrator and lithographer.

Toulouse-Lautrec was mostly seen painting and drawing by day and haunting cafés, dance halls, cabarets, circuses and brothels by night. An original artist in every sense of the word, he brilliantly executed his work in a variety of media.

The body of his work that remains today reveals the influence of the fashion of his age for Japanese art, particularly  ‘ukiyo-e’ prints.

Translated as pictures of the floating, or sorrowful, world, ‘ukiyo-e’ prints were developed from the 17th – 19th century in the city of Edo (now Tokyo).

This was during the time when the Tokugawa shoguns ruled Japan and merchants turned to art and culture so that they could compete equally with the elite upper classes.

The unique collaboration of merchants with artists, publishers and townspeople produced the prints, which became exceedingly popular.

They may have debased their value as art per se, but nevertheless elevated their status as sophisticated works. He used text as an integral aspect of his poster’s overall design and composition, elevating his exciting new visual marketing tool to which he sometimes added ‘special effects’, into the realm of art.

He used bold colours and bold imagery, including voluptuous women, all of whom were busy flirting with onlookers. During the short span of his life he completed some remarkable portraits.

His image of ‘impressionist’ painter of Vincent Van Gogh in pastel reveals a colleague he met in Paris with Gaugin and who would also die tragically at a young age. Woman before a Mirror an oil painting produced on cardboard he completed in 1897 reveals Miss Loïe Fuller nude, save for her black stockings; she stands straight-backed gazing into a looking glass analyzing in a detached manner her body’s attributes, its many flaws and faults.

The viewer is compelled to gaze along with her; we are presented with both her ample buttocks and her blurred reflection, as we become voyeurs in her bedroom, and time.

She is not a romantic heroine, but a flesh and blood real woman, for whom Toulouse-Lautrec obviously felt some empathy.

He genuinely admired both the most fabulous or failed fallen women, going to enormous lengths in some instances to record their attributes and their movements.

Ms. Fuller was known for her cabaret routine, which combined dance with light shows set to music.

He captured her many times magically, and with the added variety of using coloured and gold and silver inks to evoke the same sparkling effect he had experienced during his life as an active part of what was a remarkable and colourful community.

I have tried to do what is true and not ideal 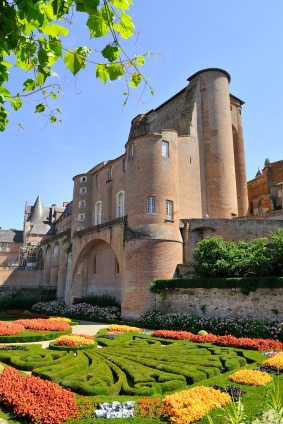 Each night he could be seen laughing, drinking and sketching at a crowded table, recording the images that he would later expand.

By the 1890’s Henri Toulouse-Lautrec’s health was in serious decline and he was confined to a sanatorium. He later retired into his mother’s care and died at the family Chateau of Malrome on September 9th, 1901.

Today in the pretty pink-hued city of Albi in southern France, the birthplace of Toulouse-Lautrec, the biggest museum dedicated to the works of the renowned artist reopened its doors in April 2012 after an ambitious refurbishment project lasting 11 years.

The former Palais de la Berbie, set picturesquely on the banks of the river Tarn, the Musee Toulouse-Lautrec is now dedicated to the artist.

It became a museum in 1905, with the Toulouse-Lautrec galleries inaugurated in 1922, thanks to a bequest from the maestro’s parents.

Over 1,000 works including paintings, lithographs, drawings and preparatory studies provide a comprehensive and well-documented view of Albi’s best-known son, perfectly illustrating each of the styles and talents of the multi-faceted and innovative painter.

Steve Jobs the movie directed by Danny Boyle, is high-octane portrait by award winning Irish born actor Michael Fassbender of the man many believed was a genius