A unique photo exhibition ‘Celebrate the 100th edition of the Tour de France’ is now on at Sydney. Australians it seems cannot get enough of le Tour de France, which despite its difficulties, emerges as one of the highlights in the sports year around the world. Cycling is a wonderful sport for the individual who is also part of a team, proving that working together in all things achieves success. The multidimensional and multicultural aspects of cycling are positive, fostering a good attitude offering opportunities to gain both mental strength and inner well being. 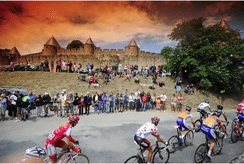 In early 20th century France, anyone envisaging a near-2,500-km-long cycle race across the countryside, would have been widely viewed as unhinged. Géo Lefèvre, a journalist with L’Auto magazine at the time however had an inspired plan. His editor, Henri Desgrange, believed in his idea and backed the first Tour de France. On 1 July 1903 sixty pioneers faced the start and set out on their bicycles from Montgeron. There was six mammoth stages. They rode from Nantes – Paris, 471 km! with 21 “routiers”, led by Maurice Garin, arriving at the end of the first epic journey. The French cyclist who has won the most races, won his first Tour de France in 1978 while still a rookie in the Grande Boucle. He won the Tour four times (79, 81, 82 and 85) and was nicknamed “The Badger” for being so fierce. He retired after the 1986 Tour. 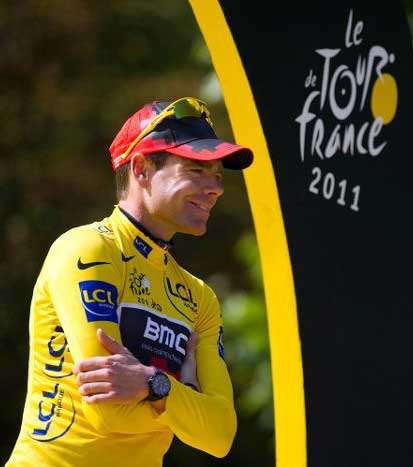 Aussie cyclist Cadel Evans gained a great deal of respect when he stepped onto the winner’s podium in the Champs Elysées at Paris in 2011, speaking first in the language of his hosts the French, honouring both the customs and beliefs so central to their existence. In 2013, its centenary year, the race will start on the island of Corsica, whose most famous son to date was Napoleon Bonaparte, Emperor of France. It is the first tour to be completed only on French soil since 1988, and seven flat stages, five hilly stages, six mountain stages and two individual and one team time trial stages will test the most experienced of riders when it commences on June 29 and ends on Sunday July 21.  Exhibition ‘Celebrate the 100th edition of the Tour de France’ Sydney Sofitel Wentworth 01 May-10 July when it moves to Melbourne to the Sofitel Melbourne on Collins from 15 July-31 August.  Entry is FREE