The power of ‘poppies can be seen in the amazing installation, ‘Blood Swept Lands and Seas of Red’.  The Tower of London’s famous dry moat has been filled with over 800,000 ceramic poppies to create a powerful visual commemoration for the First World War Centenary; 11 November, 2014. 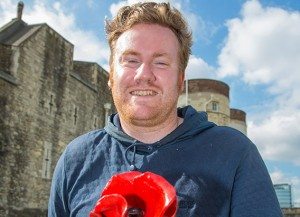 Ceramic artist Paul Cummins has created each poppy, which represents a British military fatality during the war. An inspirational ceramic artist Cummins bold, exuberantly organic flowers and vibrant glazes draw on a myriad of inspirations and experiences. The idea for the installation was inspired by the will of a Derbyshire man who joined up in the earliest days of the war and died in Flanders. 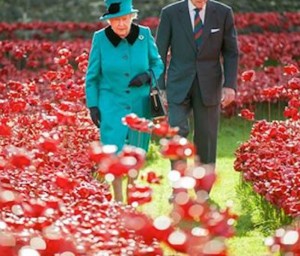 Knowing that everyone was dead and he was surrounded by blood, the man wrote: ‘The Blood Swept lands and seas of red, where angels fear to tread.’ From this line came the idea for this extraordinary field of poppies made using ceramic techniques utilised by potters during the First World War. 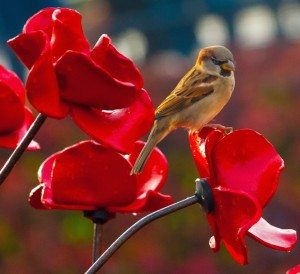 They are so real, that even the birds consider them a wonderful place to perch. The scale of the installation reflects the magnitude of loss, creating a powerful visual commemoration of the century since World War I began. They now circle the entire historic iconic landmark, creating not only a spectacular display visible from all around the Tower but also a location for personal reflection.

The crowds are flocking in, and so successful is the show that people are begging for it to be extended. The objective of the project was to raise millions of pounds to share equally amongst six service charities.