As I write this Cyclone Yasi, a category five cyclone is about to cross onto the land in the north of Queensland. With furious winds, torrential rain and flooding adding to Queensland’s massive recent flood event damage bill, it is yet another example of nature’s awesome power.

To put it into perspective the cities of Cairns and Innisfail, which look like being in the direct path of this unbelievable storm event, are two hours away from where I am on a jet plane. That is the same distance as flying from Brisbane back to Melbourne at the bottom of Australia where I usually live. Family members know that unless something extraordinary happens, for the moment I am quite safe. 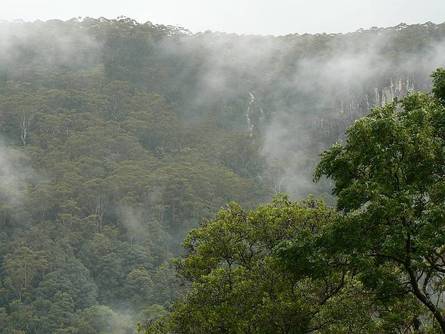 It is important for us all to never forget just how out of our control nature is and how important it is for humankind to remain connected with it.

During the past week I have been traveling in northern New South Wales en route to Brisbane, Queensland to help out a dear friend. It is mid summer, a time of high temperatures and hellish humidity with constant threats of wild weather. While it only lasts for a short time on the scale of a whole year, summer in Australia as in many other parts of the world, can often try most people’s patience.

On the early part of my journey I was staying with friends in the simply sublime Wilson Creek Valley nearby the town of Mullumbimby in northern NSW. They have a house a thousand feet above sea level looking toward the sea at Brunswick Heads and south toward Byron Bay. Its residents are no strangers to wild weather events and, like all the houses built in this picturesque tropical place it has huge bolts buried deep intp the ground that pass through the concrete base and walls to hold the roof on.

Sitting looking out all over the valley while I was there one could easily have been lulled into a dreamlike state. The natural beauty of the place defies description, especially when the sun rises over the mountains as the clouds hover in wonderful weightless wisps in the valley below. 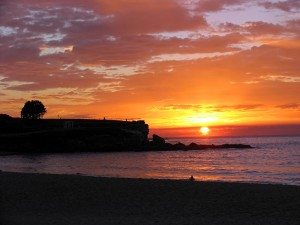 When I was a kid it seemed to me everyone knew, especially those who lived near a coastal beach like I did, that summer was certainly not the time to go up to the north of this great land to stay at its beaches or on its islands. This was the time when huge tides ruled and nasty jellyfish and blue bottles came onto the shore to sting without notice, sometimes causing death. It was also the time when you could expect nature to unleash its fury, whether in the form of fierce lightning storms or cyclones that track in from the sea devastating the land.

My generation, who grew up near the seaside knew that warm seas in summer usually meant trouble. As a rule the water was more likely to be cold in summer and warm in winter. If however warm water lapped onto the seashore in summer when temperatures and humidity were hot and high it would also attract monster storms and cyclones to come close into the shore.

In the past decade drought and low sea temperatures have been the order of the day and during that time many have become complacent about the awesome power of nature. During this time living memory has been eroded and there has definitely been a feeling about that the climate had completely changed.

Many in the past had been quite used to category two and three cyclones on a regular basis, however a category five is quite another thing all together. This is the largest cyclone event to have come onto the land mass of Australia since 1913 when the population was much smaller. Yasi holds a promise of winds exceeding nearly three hundred kilometres an hour with sea surges of up to seven metres expected. God help all in its path.