Magnificent treasures from the royal capital city of Macedon include a simply splendid selection of sensational artifacts, some virtually freshly dug from the northern Greek soil.

Some five hundred objects made of gold, silver and bronze were found in the burial tombs and palace of Aegae, the ancient capital of Macedon. They include an outstanding ivory inlay figure in remarkable preservation dating from c310 BCE.

From the funeral couch of Alexander IV, son of Alexander the Great with outstretched arms and beautifully detailed tunic and belt he is quite unlike other objects excavated from ancient Greek sites. The reason we know about Macedon today is mainly because of Alexander the Great and his father King Phillip II. They were colossal historical figures who changed the world, spreading Hellenic culture.

Ancient Macedon socially, economically and culturally did not develop the polis, or city state institutions so characteristic of the regions of Greece in ancient times. They lived under the same political system uninterruptedly for 500 years, which was dominated by a land owning aristocracy ruled by Kings.

Single is the race, single
Of men and gods;
From a single mother we both draw breath.
But a difference of power in everything
Keeps us apart.
(Pindar, Nemean Odes, VI, 1, ca. 450 BC)

In antiquity Macedon was a society entirely dominated by its royal house. While the rest of ancient Greece gradually became democratized it held back many of its secrets and treasures, which were buried along with its glorious remains in the mists of both memory and time. That is until the middle of the 20th century.

Distinguished classical scholar Nicholas Geoffrey Lemprière Hammond (1907-2001), when working as part of the Greek resistance during World War II for the British reasoned the town of Vergina was a likely contender for the site of Aegae, the lost royal city razed by the Romans during the 1st century. 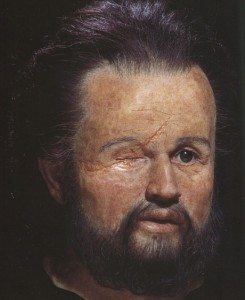 Possibly the face of Phillip II of Macedon reconstructed in the early ’80’s by forensic scientist Richard Neave.

He put his argument forward to other scholars in 1968 but was opposed by those who assumed Edessa in northern Greece was the right site.

Hammond’s viewpoint was finally confirmed when Greek Professor Manolis Andronikos found what he believed to be the tomb of King Phillip II (359-336 BCE) and his grandson Alexander IV in a mound nearby to Vergina in October 1977. While the physical remains have continually fascinated as they have been uncovered they have also caused controversy between archaeologists and historians.

They had the skull’s fearsome face, complete with scars and a disfigured eye, brought back to life in 1981 through meticulous research and reconstruction by Britain’s renowned forensic scientist Richard Neave.

The damage to the right eye was made by an arrow and it certainly corresponds to a reported injury that Phillip II suffered at the siege of Methone in 354 BCE some eighteen years before his death.

Gold ornaments of the Lady of Aegae

Since then they have unearthed a plethora of objects. This includes beautifully intricate gold jewellery and from silverware, to pottery, sculpture, mosaic floors and amazing architectural remains.

Finding what is believed to be the tomb of the father of Alexander the Great was a rare bonus.

The richness of the finds in the women’s tombs at Aegae are highlighted at Oxford through their stories and precious objects.

Some eighteen figures were found in the burial chambers, including a terracotta figure with a draped dress still retaining just a hint of paint.

The so-called ‘Lady of Aegae’ who dates from around 500 BC, was thought to be a Queen and high-priestess, she was found in an undisturbed tomb.

After she had died she had been bedecked with funerary goods and dressed, head-to-toe, in spectacular gold jewellery.

This had been sewn into her clothes. Even the soles of her shoes were covered with silver.

She wore a chiton and heavier peplos and an epiblema (a kind of over garment). At her shoulders fibulae were used as fasteners. 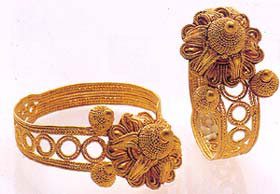 Gold earrings from the tomb of the Lady of Aegae

Glorious gold earrings found in her tomb showcase the high degree of technical skill used in their manufacture.

Other wonderful objects discovered include a beautifully worked gold quiver cover of Scythian origin, a selection of clay heads and yet more amazing gold and silver objects. A golden casket with the starburst symbol of the royal dynasty of ancient Macedon impressed into its lid was found in Tomb II.

The sculptures, including a pair of elegant marble lekythoi, or funerary vessels and as well there was the well preserved head of a hero dating from around 335 BCE. Despite much evidence some scholars today still dispute the human remains found inside it are those of Phillip II.

Andronikos found them wrapped in a cloth of purple and gold (ancient sign of Kingship). There was also a glorious golden wreath wrought of 313 oak leaves and 68 acorns. A King’s diadem.

A woman’s remains wrapped in a golden-purple cloth with a golden diadem decorated with flowers and enamel caused the most speculation. The bones had been partially destroyed by fire.

There has been much speculation about who she is because Phillip II had multiple wives.

Hammond before he died seemed to favour Meda of Odessa, a Thracian princess who in accordance with custom would have been required to commit suicide when her husband died. 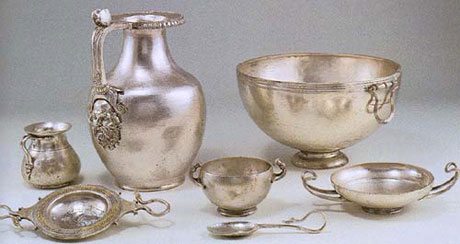 A once great and shimmering metropolis Aegea was, from the mid seventh to the fourth century before the Christ event, situated on the southern rim of the Macedonian Plain in northern Greece.

Its almost mythical dynasty claimed they were descended from the Greek hero Heracles.

Macedon’s system of monarchy ironically was perhaps the most stable form of government in Greek history. It persisted from about 650 to 167 BC and it only ended because the Romans abolished it. Head of a Hero from Aegae

Phillip II’s son and heir Alexander the Great died at sunset on June 10, in the year we today know as 323 BC. He was 32 years old.

He had godlike status during his lifetime and for many centuries after. By his 30th birthday he had conquered an empire stretching 3,000 miles from Greece to India.

Alexander the Great had a tomb matching his personality in the city he founded at the mouth of the Nile in 331 BCE – Alexandria.

For almost 600 years Alexander’s tomb was a pilgrimage place for people coming from all over the world. That is until the beginning of the fourth century.

This was when Christianity triumphed and from then onward nobody would say where this pre-Christian hero was buried.

Basically his tomb simply disappeared both as a monument and from written texts. What they couldn’t erase however was verbal history and the memories of the many who were attached to his life and legend. They lived on in the different cultures that he had visited and conquered during his brief life.

Alexander’s tomb must be the most sought after in archaeological history. To find it would be like putting in place the final jewel in the crown of Macedon.