In the natural landscape trees, which often host a variety of bird and other plant life, are admired for their form, their shape and their colour. It was the colour of their green, the luxuriance of their foliage, the formation of their crown, the thickness and height of their trunks that was most important to the ancients.

Whether tall, stout, large or old they became symbols of life and knowledge, as old as life itself.  They are to be found naturally on great mountains, in misty river valleys, alongside lakes large and small, rivers, creeks and waterfalls.

They are made of wondrous wood, hailed as nature’s building block. They provide an energy source, prevent erosion, produce an ecosystem for other plant material, as well as create shade and shelter for humans and animals. 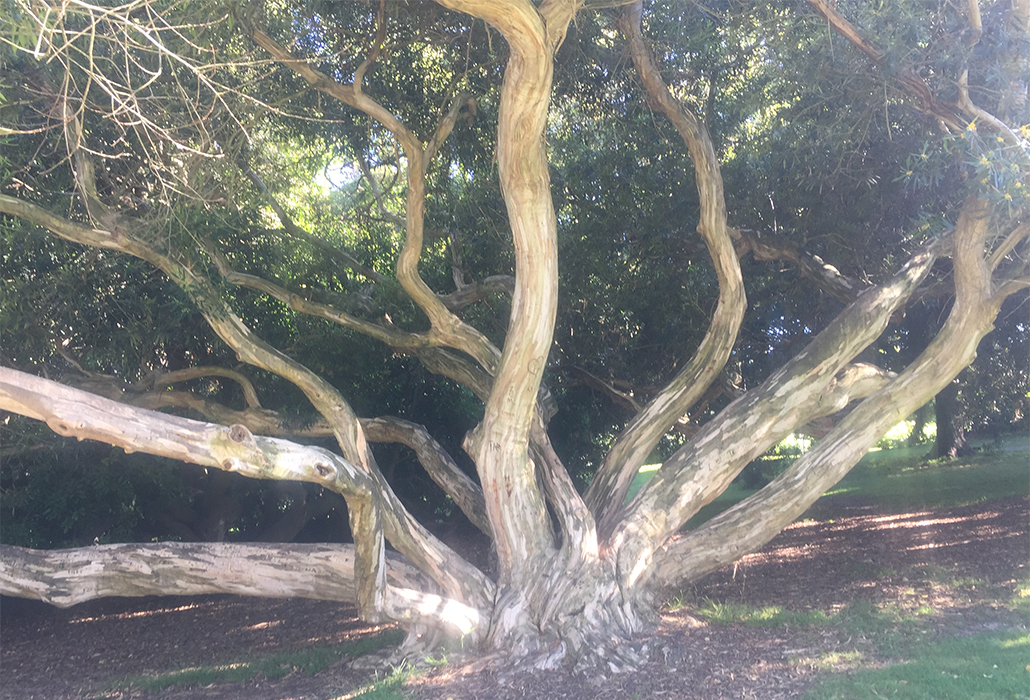 Trees are awesome, they are nature’s fortress and humankind’s friend. At Melbourne there are some of the most sensational and beautiful specimen trees indigenous to this land, as well as exotics purposefully introduced into Australia. Many of its parks and gardens contain fabulous trees, which are now over 100 and 150 years of age. They have been given the room to grow as they would in nature and are valued and conserved. Fawkner Park on busy Commercial Road South Yarra opposite The Alfred, one of Melbourne’s largest hospitals, was established in 1862 on 41 hectares of land owned by John Pascoe Fawkner. It remains substantially unchanged from its original design, providing a place of solace and peace for those in between appointments opposite.

Running parallel to Commercial Road and its footpath there is a giant avenue of Oak Trees. Having to travel along this huge Melbourne block (blocks are much bigger than Sydney or Brisbane) the other day I veered off the footpath and traversed a huge expanse under the shade of these wonderfully mature trees.

It was pleasantly cooling, and I could not understand why those walking on the footpath had forged on when they could have entered this graceful and elegant pathway to reach the same destination. Pausing in life to ‘smell the roses’ so to speak, or just to be visually aware of the rich heritage of our surroundings in Australia today is important. So many people laboured in the past to create the beauty we now enjoy. They never expected to see the end result of years of planning, because they were visionaries planting for the future. Each day on my walk I traverse the paths and byways of the lovely Botanical Gardens nearby the Yarra River, where some of the trees are so spectacular that they quite literally take your breathe away. Massive Moreton Bay Figs brought down from Queensland in the latter years of the nineteenth century, are getting to that wonderful ‘gnarled’ stage in their growth habit, where their branches seem to reach out like giant arms ready to enfold you in their grasp. The gardens are full of giant trees and in the months ahead I hope to visit most of them. On my way to the gardens I have to travel underneath the sole surviving Golden Elm introduced to this city. Planted on the corner of a busy intersection near a bridge over the Yarra River, the footpath for pedestrians has been re-routed so that you completely circumnavigate this giant tree with its wide spreading habit. The underside of its cooling canopy can be observed in peace and quiet from a park bench placed strategically underneath. It is beside the path and near to the edge of where its outer branches reach. 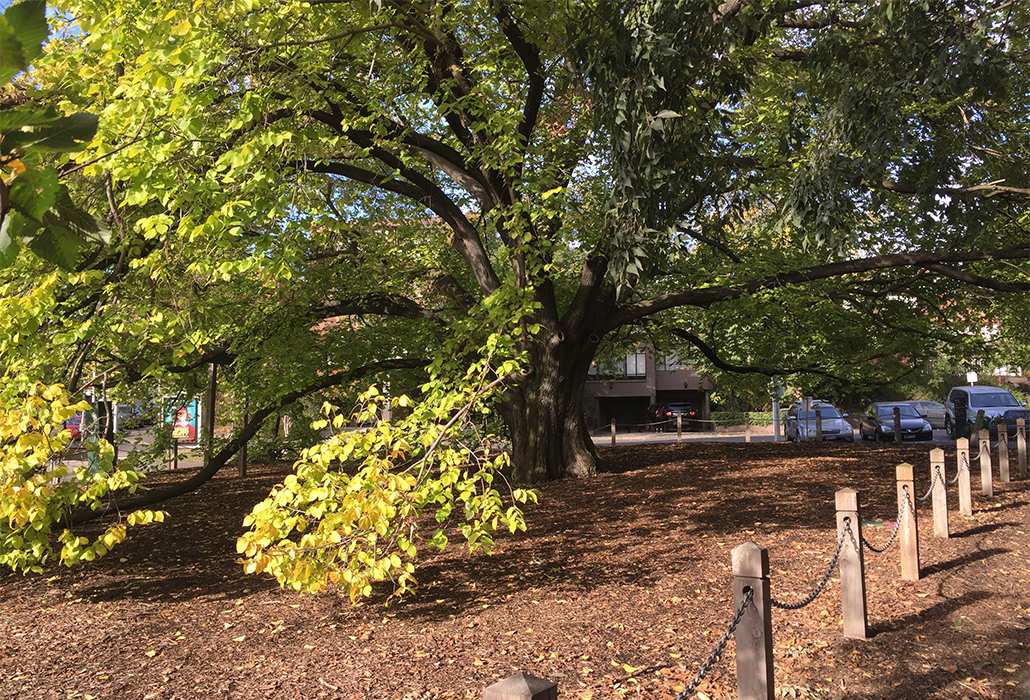 The tree is cared for by The Friends of Elms in Melbourne. It certainly adds to the quality of life for those who live nearby (lucky people) as well as those who pass by it on foot on their daily commute. When you are underneath the sunlight in summer penetrates the dense foliage with rays of golden beams of light. It is very inspiring to look at how those conserving it have so beautifully shaped its ‘undercarriage’. In winter it is a different story, as the leaves it carries fall and let the light of life in. At that point it looks like a giant piece of incredible architecture moulded by time and shaped by man. This is surely one of the most the perfect of all the true shade trees, with its eye-catching golden foliage that returns to its branches each spring, bright and pale lime-green.

The Golden Elm is especially renowned for its tolerance to air pollution, so it is good for sustainability. Standing on the corner of two of Melbourne’s busiest roads in excellent health would seem to prove the point.

The other day when powering by I stopped to talk to a tourist from America’s south. She was sitting on the bench with her watercolour notebook open and a small palette of gentle colours at her side, painting the view from within. She said she was overawed by its powerful presence, and that sitting there was like being inside a giant green protective cavern, where you felt surreal and inspired and she just had to record its magnificence.

She also said what a surprise Australia was and that she had not ever realised just how close our two cultures were, especially in our preference for plant life. At Melbourne there are also some beautifully shaped trees in the courtyard of a small shopping mall on Toorak Road at South Yarra. Haven’t been able to find out what they are yet – have asked the shopkeepers who they don’t know, so will grab a leaf next time I am going by to see if I can identify them. They provide a fabulous addition to the aesthetic of the space and their great weeping habit has been underpruned.

A true shade tree is deciduous by nature  and it is meant to be tall, with its great arching branches and dense foliage.

This enables the tree to filter sun in summer when it is so intense, protecting humankind from its powerful rays and dangerous effects. It then conveniently sheds its leaves for winter, allowing the sunlight in so that our bodies can absorb supplies of Vitamin D at a time of year, when the danger to our health is at least less.

The Golden Elm and Plane Tree are of value in that they provide incredible shade and continue to have a role to play in Australia, alongside native trees, at least in city landscapes. When Napoleon came into power as Emperor in France he had great avenues of trees planted on both sides of the road as well as on each side of villages.

This was so that his troops, when marching on their way to and from various posts and stations, other countries and to war, could be shaded or lie down and shelter, while the village provided them with food and sustenance.

This practical application of trees has proved to be aesthetically pleasing in the nearly two centuries since. When you drive through the French countryside the first thing you notice is this ‘planned’ natural phenomenon (pictured right).

One of the greatest of the shade trees planted spectacularly in France is the Plane Tree, which was beloved by the Romans and the people of Provence in southern France, where they arch and meet creating great tunnels of green to traverse on a hot summer day. The variety known as London Plane Trees feature dramatically here at Melbourne. They reach out and meet each other forming great arches of greenery, whose cooling effect is best felt on a plus 30 degree heat day.

The Plane tree is native to the Northern Hemisphere, and grow to 50 metres. They are very tolerant of local conditions and have adapted well to the Australian climate in Sydney and Melbourne, where they seem to thrive. They form wonderful avenues and have been a significant aspect of our cultural history. 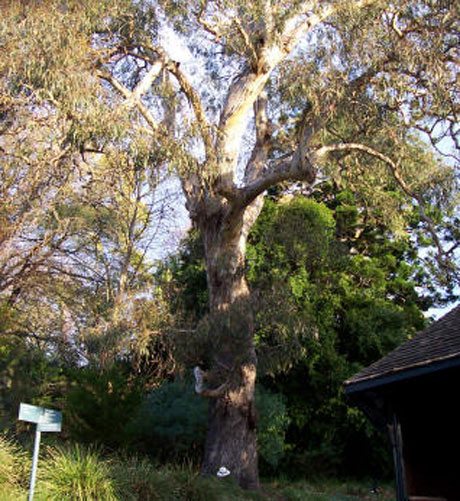 Separation Red Gum, Botanical Gardens Melbourne before it was ringbarked and destroyed by vandals.

The Separation Tree in the Botanical Gardens is a large River Red Gum, a tree of the genus Eucalyptus, one of about 800 varieties. In nature it is an important shade tree in the extreme temperatures of inland Australia and plays an important role in stabilizing river banks.

It also marks the spot where on the 15th November 1850 citizens gathered to celebrate the news that Victoria was at last independent from NSW. Brisbane would follow in 1859. These were significant events in Australian history so the tree has attracted a great deal of attention. That is until 2010 when some idiot vandal ring-barked it and it did not survive. What is it about trees that stir emotions sometimes good, sometimes bad. Fear of trees is passed down to us from mythology of the European middle ages, when criminals hiding out often in forests from the authorities placed various types of man made paraphernalia in the trees to ward off the locals and stop them from finding their lair.

It was still evident back in 1970 in Sydney when, on the day we were moving into a ‘spec built’ house my father came to help and within a few moments of his arrival passed by with an axe over his shoulder heading for a small grove of rapidly growing native eucalypt trees planted on the foot of a sloping bank near the footpath.

We had been pleased to see them when purchasing the property for we knew in years to come they would provide shade for passers and in the meantime practically hold the soil in the bank together to prevent slippage in extreme rain events. Gnarled bark of a Horse Chestnut in Botanical Gardens at Melbourne

He was most distressed however when I stopped him, saying he did not want them to have a chance to fall on the house and kill us all. While trees have, and are blown over onto houses in storms, loss of life is minimal compared to ‘crossing the road’.

When I said we were willing to take the risk to keep them because they were a fair way away from the house he said he could not understand, but eventually gave in to my wishes.

Visiting the house on Google Maps recently just a handful of the originals have survived and they are indeed now shading the footpath, but fear has probably driven a decision to fell the rest. 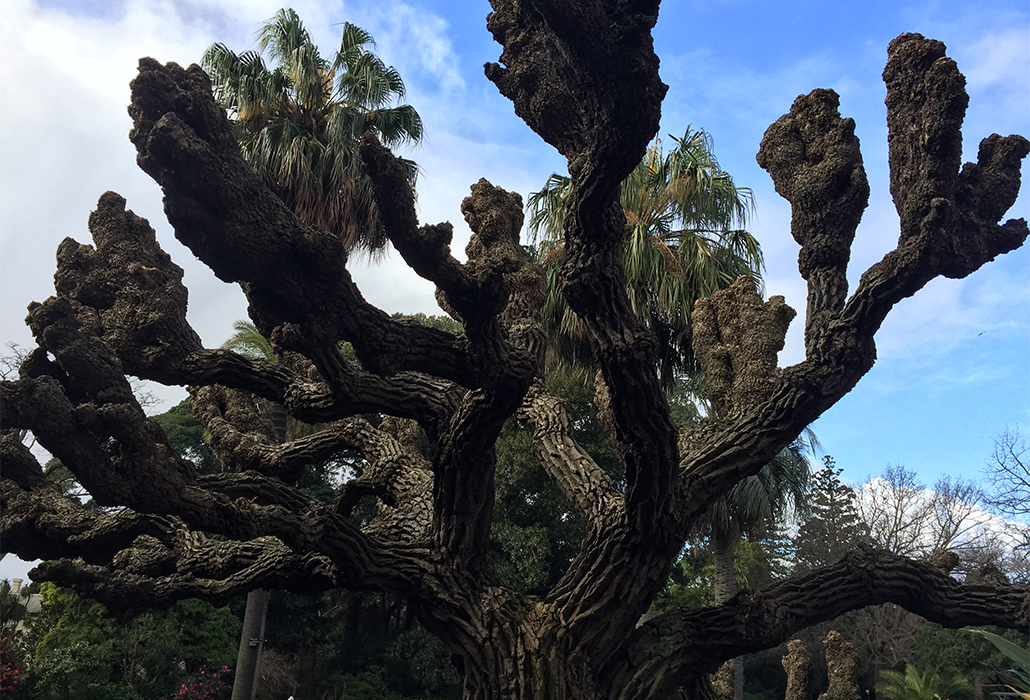 Hollywood Actor, Writer, Producer and Director Woody Allen (1935 – ) says, ‘Only God can make a tree’ — probably because it’s so hard to figure out how to get the bark on‘.

The Arcadian ideal of ancient Greece as a centre for youth, energy, toleration and intellectual freedom a place where beauty and nature came together is true