The development of cultural diplomacy and trade between Britain and Russia had its origins in 1555, when the London Muscovy Company (at first The Company of Merchant Adventurers) was founded.

The company gradually gained a monopoly on trade between England and Muscovy (Grand Duchy of Moscow) until 1698 when it became a trading company that lasted until the Russian Revolution of 1917.

Still in operation today, it is now a charity retaining its connection to the crown of England and supporting the St Andrew’s Anglican Church at Moscow.

British and French silver from the former Tsar of Russia’s Treasury was either sold through British merchants or given to Russia as diplomatic gifts by successive English ambassadors from the reigns of the Tudor Kings, especially Elizabeth I (1533-1603), and on to the restoration in 1660 of Charles II to the English throne, to cement their alliance. The Moscow Kremlin Museum in celebration of 500 years of Anglo-Russian exchange lent some of their greatest treasures to be exhibited in England early in 2013. The show was a great success.

The sixteenth century was an age of visual boldness and certainly not an era for the fastidious or feint hearted. It seems to me a sensuous vulgarity and a hearty aesthetic appetite is required to appreciate it, as well as many of the era’s visual metaphors.

During the Tudor dynasty people became passionate in their exploration of life and went from shouting Alleluia in times of plenty, to burning heretics at the stake when they wanted a scapegoat for all ills.

High treason was the charge for anyone who opposed a monarch hell bent on a path to victory.

It would however in England be a slip of a girl with Titian coloured hair who proved that hereditary qualities can win out over being brought up in a hellish environment of hate and amazingly offer hope that things could get better for her people. A little known portrait of Elizabeth 1 rarely seen is the Hampden Portrait, an image of Elizabeth, which has been attributed by scholars to Steven van Herwijck (Utrecht 1530-1565/7 died London) a Netherlandish artist famous for his gem engravings, portrait medallions and medals.

It is the only image known that alludes to the possibility of Elizabeth becoming a wife and mother and was painted during the 1560’s when she was still in the prime of her youth. It was also at a time when she was being forced to come to terms with how she would live out her life as a ‘virgin’ Queen.

During the reign of Elizabeth 1 richly decorated costumes came under Hispanic influence with tight bodices, sleeves and excessively wide skirts.

An image formerly in the collection of the Earls of Buckinghamshire at Hampden House (until recently hanging in Aylesbury courthouse) was loaned for the exhibition by the Philip Mould & Company in London, who specialize in historical art works.

It has not been reproduced in any of the modern literature on either Elizabeth or Tudor portraiture and its reappearance and recent conservation has raised many new questions about Elizabeth’s celebrated determination never to marry, and casts new light on Elizabethan portraiture.

In deciding to remain unmarried Elizabeth was able to offer herself wholly to the path of duty and empire, and to her powers of discernment of good from bad.

There is a complex symbolism attached to the painting, least of all the amount of gold used in the background, which exceeds the amount known in any other picture of this period.

It must have been very imposing to the Elizabethan viewers, including her suitors who would have also understood the hidden language represented by all the flowers; the carnation for instance, being an attribute of the Virgin Mary, as well as a symbol of love and betrothal.

Elizabeth’s father Henry VIII had given great importance to the orders of chivalry and it was he who established St. George as England’s patron saint.

His own suit of armour was immense, built for a ‘tubby’ Tudor King with a whopping 52-inch waist and 53-inch chest.

More importance was placed of the actual bravery of the knight by his reign rather than his eventual victory.

Membership of the Orders of Chivalry possessed great value as part of the never-ending exchange of gifts between monarchs to cement alliances, arrange marriages, or cultivate good will. 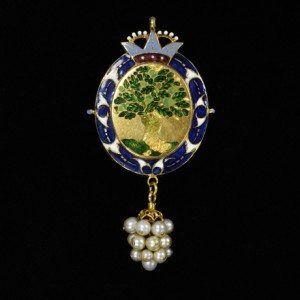 Stunning jewellery on show included the Barbor jewel, a pendant made 1615-1625 of enamelled gold and set with an onyx cameo, rubies, and diamonds and hung with pearls.

Being able to carve back layers of marvelous materials such as rock crystal, sardonyx (as in this case) agate and the more modest glass paste, to produce a pictorial sculptural relief takes a great deal of skill, time and patience to perfect and perform well.

This jewel is said to have been made in commemoration of the deliverance of one, William Barbor, from being burned at the stake at Smithfield because of the Queen’s accession, when it was customary to grant clemency to many prisoners of the state.

He was a Protestant prisoner who died in 1586 so its more than likely it was made by a family member in his honour.

The technique employed to create a cameo is both sophisticated and costly because it is so labour intensive.

Aristocratic men at this time often had them fashioned into brooches and attached them to their hats. 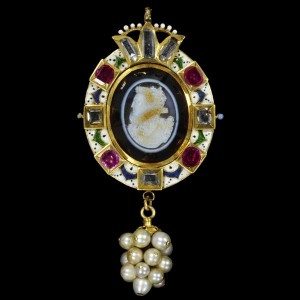 One thing we would have to say about the Tudor monarchs of England is that they perceived that the visitors to their court equated lavish display with national strength and power.

Rubies, diamonds and pearls were all emblematic of enduring passion, and the seagoing vessel a favourite allegory for an individual’s triumph over the storms of love.

Portrait miniatures were important gifts of state and often played an important part in marriage negotiations with foreign courts.

Elizabeth 1 and her successor the Stuart King James 1 understood the power of these tokens of loyalty and royalty.

Nicholas Hilliard 1547 – 1619 and George Gower 1540 – 96) served the Queen and King, particularly in rendering miniatures, although contemporarily his talents were poorly rewarded. 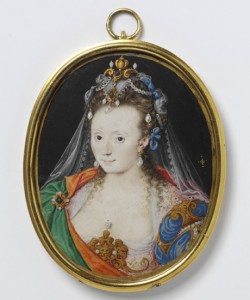 Costume at this time became a barometer of success and a political statement, especially when peace and prosperity reigned, a degree of luxury prevailing with men’s slashed doublets and capes lined with animal furs.

They were also usually suitably robust in their design as they complemented the sumptuous textiles of that age; splendid furnishings and fine clothing, which is brilliantly depicted in portraits of ambassadors, courtiers and monarchs offering us just a glimpse of life at the royal courts between 1509 and 1685.

A portrait of a lady in masque costume set in a locket highlights the wonderful display the court masques must have been.

They were a form of symbolic theatre in which James I’s queen, Anne of Denmark, and her ladies often took part.

This sitter therefore is publicly proclaiming herself as one of the queen’s intimate circle. During the 16th century, the life expectancy of the average man was 45 and no other period in history would give men more precious adornments to project their human beauty.

Henry VIII himself was anointed with the holy chrism oil of the church wearing clothes weighed down by buckets of jewels that blinded everyone with their brilliance.

Men wore tight fitting doublets with puffed trunk hose and this flowed over into the Stuart age.

Women’s costume was much more elaborate, due to the Queen’s efforts, as she strove to replace the image of the Virgin Mary in the people’s consciousness with that of a Virgin Queen.

At this time the woollen industry and cloth trade in England increased, with England only importing luxury textiles for the elite in society.

At Moscow Ivan IV (1530 – 1584) became known as Ivan the Terrible during the early stage of the rule of the House of Romanov in Russia. He was titular head of the second and last imperial dynasty, which lasted from 1613-1917.

At the early Romanov court there were many successes, achievements and victories alongside many serious mistakes and miscalculations.

During that time its rulers strove to strengthen the family and its power against a backdrop of religious turmoil and social upheaval.

Ivan IV, who was crowned in 1547 also married Anastasia Zakharyina in 1547 and for a time they were exceedingly happy and he strengthened the position of the Romanovs with a series of useful reforms. During the 1550’s he declared a new law code, revamped the military and strengthened local government so that it could stand steady during an onslaught of war.

However in 1560 his beloved Anastasia died in mysterious circumstances, and Ivan, convinced his enemies had poisoned her, started a reign of terror that would totally define his era and give him his nickname. This included murdering one of their sons.

He clearly demonstrated how dangerous it was to place unrestrained power in the hands of an individual, one who was mentally unstable. The other courts of Europe learned from this mistake.

In England, gradually circumscribing the powers of the monarch would also be carried out gradually over the ensuing centuries until parliament ruled.

It was Ivan the Terrible who assumed the title of Tsar, together with the proclamation of the Tsardom of Russia. His court combined ceremonies and customs inherited and imported from other cultures through marriage, along with political traditions established in Muscovy.

All the complexities of its history exerted a huge influence on the intellectual, philosophical, political and cultural development of Russian society

Russia was not a country that much was known about anywhere else in Europe before the mid 16th century except what was gleaned by English and Dutch merchants.

It was in 1553 the English explorer and navigator Richard Chancellor, sailed to the White Sea and then continued overland to reach Moscow. He was later responsible for establishing the Muscovy Company along with other London merchants and his mentor, the explorer and cartographer to Henry VIII Sebastian Cabot, and Sir Hugh Willoughby, an early English arctic voyager.

Through the company Ivan the Terrible was able to exchange letters with Elizabeth 1. The Dacre Beasts are rare survivors of a tradition of heraldic ornament. They represent one of the most powerful families in Northern England and are a unique survivors of free standing, large-scale wooden heraldic sculpture from the English Renaissance courtesy V & A Museum, London

One of the objects displayed was the figure of a carved, painted and gilded oak red bull holding a tinned copper banner.

Known as the Dacre Bull, after Thomas Lord Dacre (1467-1525) a friend and confidant of King Henry VIII, it’s a rare survivor of a tradition of heraldic ornament.

Scholars, curators and historians will no doubt continue to debate the diplomatic and trade relations that existed between England and Muscovy for many years re-visiting how they stack up with relationships during the contemporary age.