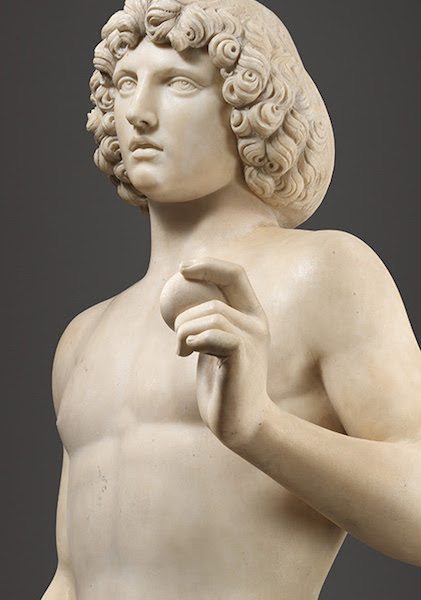 Falling off your pedestal in the spooky silence of a museum at night is not something that is supposed to happen to a number one man, especially if he is named Adam. After all we know his biblical ancestor did just that when tempted by Eve.

However there wasn’t any ‘Eve’ around, well at least as far as officials understand it, when the  truly fabulous life size nude strapping six foot three inch high marble sculpture of Adam who represents the story of the “Fall of Man’, came crashing down off his pedestal.

This happened one Sunday night in 2002 at The Metropolitan Museum of Art in New York.

A masterwork by Italian Renaissance master sculptor Tullio Lombardo, Adam quite literally lost his head and broke into hundreds of pieces. It must have been the worst nightmare ever for both the guards and the curators. He was the first nude marble statue sculpted since antiquity, and the most important ‘Italian Renaissance sculpture in North America’.

Now this superb and very serene work of art carved in the early 1490’s is finally back on view in the round.

Thomas P. Campbell, Director and CEO of the Metropolitan Museum, said: “We are proud to return this great Tullio sculpture to public view in a beautiful new gallery.  Our extraordinary conservators collaborated with a team of experts over 12 years to pursue this extremely challenging work.  The results of their care and innovation are stunning.” Adam is once again on display, this time in the New Venetian Sculpture Gallery, following his twelve-year journey of re-creation from hundreds of fragments after his momentous fall.

At the time no one was able to shed any light on why this disaster had happened until a full investigation revealed the plywood pedestal that supported him had laboured for too long under the strain of holding its great charge upright. It had just finally given up the ghost and buckled.

This event was probably about the most terrible thing that could ever happen to a museum that is charged with the responsibility of conserving and preserving objects of western cultural heritage.

It would have created added tension, because at the time Lombardo’s Adam was in near to immaculate original condition.

Tullio Lombardo (c1455-1532) was one of the greatest Venetian sculptors of his age.

He explored aspects of romanticism, beauty and lyrical poetry as part of his approach to producing works of sculpture while adhering to the tenets of works from the classical age of ancient Greece and Rome, Lombardo was inspired to go one-step further and superb craftsmanship is integral to his surviving sculptural work.

The works of paintings by now famous northern Italian artists, including Titian, Giorgione, Mantegna and Bellini, inspired them also.

Adam is an idealized figure both in history and art.

This Adam is inspired by ancient models. He exudes a romantic aura with great clarity, revealing that his maker was seeking to create the perfect human being.

Tullio created his masterwork for the tomb of Doge Andrea Vendramin at Venice.

He and his brother Anthony worked with their father in their family’s firm.

They received many prestigious commissions from the Doge’s or ceremonial heads of the Venetian state.

They were an important aspect of the Venetian economy of the time, and the northern way of life.

Breathing life into stone, Tullio Lombardo fashioned many glorious sculptures based on ancient models, although giving them contemporary hairstyles and costumes.

This was a restoration project at the cutting edge of science and art history, a collaboration that would need to first chronicle first how he was constructed in order to re-create and conserve him for the future

While Adam looks serene and uncomplicated in any way, he now also resonates that old adage ‘looks can be deceiving’. What conservators discovered is that he was a highly complex structure, with a lot more going on than simply meets the eye at first glance.

Conservators and restorers throughout their own odyssey to see him reinstated as the sublime example of sculpture he was originally – sculpture at the pinnacle of what is possible confirmed this.

They used laser mapping technology to recreate a ‘virtual Adam’. Fibreglass pins a new innovation, which provide superior weight bearing and safety services, have been used – one in each ankle and one in his left knee.

Adam is of incalculable historical importance; renowned for an allusion to ‘the fall and redemption of man’.

They were charged with bringing him ‘…back to a state where only the cognoscenti could tell anything had happened’ became the supreme aim.

The period known as the High Renaissance, which is considered an ‘apogee of the visual arts’ during the rebirth of humanism in Europe is reflected in Leonardo da Vicni’s great Fresco of the Last Supper in Milan. It ended in 1527 when Charles V sacked Rome.

Artists during this time were working to exceptional production standards, as they imaginatively evoked imagery first evident in mythology, philosophy and poetry from ancient times Achieving simplicity of delivery in any discipline in the creation process requires great planning, diligent research, careful analysis and considerable co-ordination and skill to achieve.

In many ways Lombardo’s works are romantic in their aura, and while they might look as if they were quite seemingly simply and beautifully rendered, we know now because of this landmark work that they weren’t.

In Venice as it was throughout Italy during the fifteenth century, the emergence of the artisan as a creator respected for his erudition and imagination was paramount.

The rediscovery of ancient texts changed perceptions and an attention to mathematical proportion and the discovery of how to render works of art in perspective became key elements in the production of both art and architecture.

Proportion, whether in the human body or in a sacred building came to be considered a distinctive mark of beauty.

The Vitruvian Man drawn by artist and all round genius Leonardo da Vinci (1452-1519) around 1485 was a reflection of God’s cosmic order, when ‘sparing the circle’ the human body is right at the place where the synthesis of earth (square) and heaven (circle) meet.

That may also be interpreted as, just like God, a human is also divine.  This came about because of the manuscript by 1st century Roman architect Marcus Pollio Vitruvius when discovered in a monastery library revealed the ancient Roman achievement had not been a sudden creation.

It owed a very heavy debt to ancient Greece and Athenian democracy.  From then on knowledge of the classical ideal became a subject of intense pursuit. 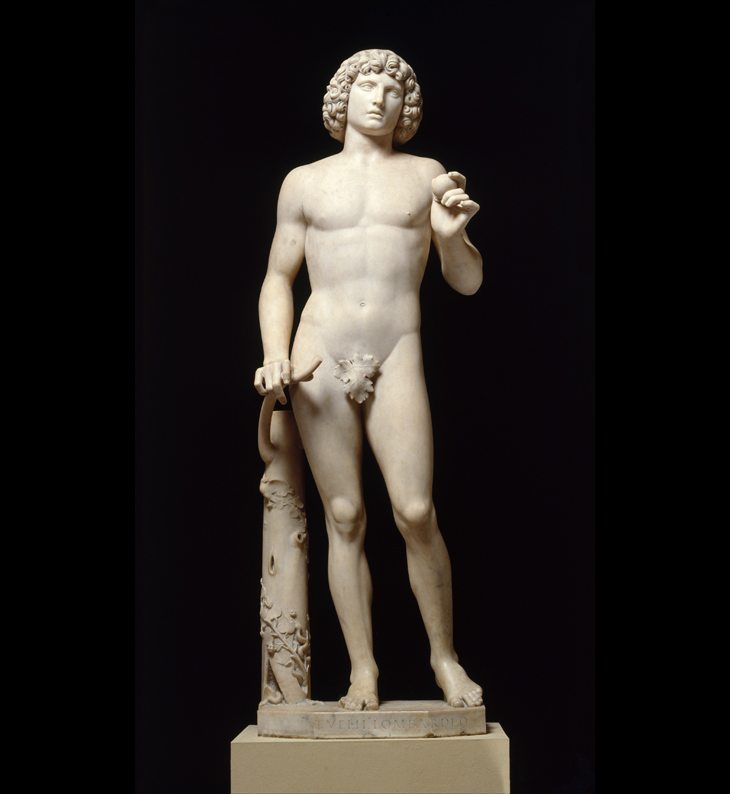 It’s entirely fitting that Tullio lombardo’s No 1 man Adam is now standing in a gallery designed based on ideals of mathematical proportion.

The new Venetian Sculpture Gallery has suffused light, helping to create a meditative environment and to encourage sustained encounters with important sculptural works of art.

The Getty Foundation in Los Angeles helped pay for Adam’s restoration, with an interactive website showing the work in minute detail as it was carried out.

The Met’s curator in charge of European sculpture and decorative arts Luke Syson emphasized that in this new tell-all era, they were all responsible for ensuring all the processes used were transparent

Tullio’s Adam is distinguished perhaps by its young warrior style of sensual beauty. It has an air of mystery, a ‘dreamy stare’ and an almost unfathomable elusive romantic quality, which makes it very pleasing to behold.

Now back on display, Adam’s re-arrival also celebrates not only his beauty but also a new permanent gallery for Venetian and northern Italian sculpture

The organisation for antique dealers and commercial art galleries in Australia is holding its Fair May 8 – 10, 2015, in the Royal Exhibition Building, Melbourne