In Tuscany, Italy the river Arno provides its life’s blood; a miracle of man’s achievement and survival in a world constantly assailed with change; one that has battled to survive as an inland town among the rugged Tuscan hills, no bigger than a provincial town today, dependent upon imported food and raw materials surrounded and threatened for centuries by enemies and hostile ideologies. The Romans founded a colony where the Arno winds out of the Apennines into a wide plain called Julia Augusta Florentia, the last name being simply a word of good omen.  (the flourishing town) It had an aqueduct, baths, theatre and temples and enjoyed self government, but in foreign policy it followed Rome. 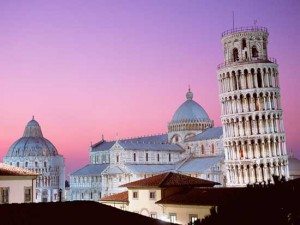 In Pisa the Romans developed important naval bases its fortunes governed by the sea, which at that time arrived at the very gates of the city.  It was a powerful marine republic in the eleventh century and the famous leaning tower glimpsed through the gates of the historical Porto Nuova;  the tower was constructed by Bonanno Pisano from 1174 for three years until subsidence suspended the work; re commenced 90 years later and completed 99 years later it was completed by Giovanni di Simone; the belfry added by Pisano’s grandson. 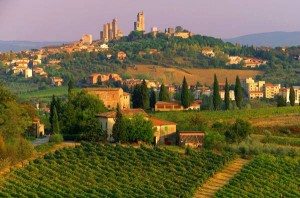 Tuscany’s citizens, like the rest of Europe, had a short life expectancy throughout the middle ages because of the dreaded bubonic plague and in the year 1348 the 120,000 strong population of Florence was reduced to 40,000. By the fifteenth century she was recovering. renowned as a manufacturer of fine cloth which for the next three centuries became her main industry – dying heavy fleeces from the green rain swept Cotswold hills in England starting a connection with the English which has always endured. 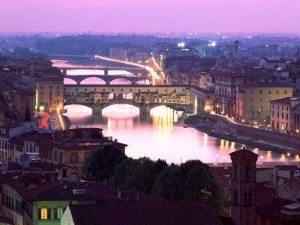 The fifteenth century in Europe is recognised as one of the most brilliant periods in world history with Tuscany, particularly Florence at its heart. The Florentines themselves believed they were living in a golden age. Our interest to-day however is more than historical. It is the watershed from which flows many of our own beliefs and some of the values we treasure the most. The effectiveness of personal freedom and liberty, the generous toleration of other religions, pride in self and family with art in all its forms providing a form of self discovery

Progress lies not in enhancing what is, but in advancing toward what will be, said Kahlil Gibran whose legacy of wise and inspirational words belong to all peoples, in all places and at all times. He was a mixture of the old and new, of east and west and brought…