‘I am in politics because of the conflict between good and evil, and I believe that in the end good will triumph. In politics, if you want something said ask a man. If you want something done ask a woman.’ So said 20th century English politician Margaret Hilda Thatcher, Baroness Thatcher, LG, OM, PC, FRS (née Roberts, (1925-2013), first woman Prime Minister of England (1979 – 1990) who was all about proving Britannia still ruled the waves. This is not surprising when we understand that former British war Prime Minister Winston Churchill (1874-1965) was her hero.

She was born into the country that went to war with Germany to preserve liberty and freedom under the law in the world. Living through hard times and being the daughter of a grocer she also understood frugality. Thatcher first gained a degree in chemistry at university and then studied and practiced law as a Barrister, working hard to gain a seat in parliament while raising a family. She was only one of 25 women in the swinging sixties in the House of Commons, distinguished by being the youngest and she noted ‘you cannot have the dream of building up your own fortune except by your own hopes, your own hands, and your own British guts’.

Margaret Thatcher was as formidable as Boadicca, the first British woman in history who believed in freedom. What she achieved politically historically was a great deal and way beyond the scope of this piece, which is about acknowledging the extraordinary woman she was and her greatest achievements. This included her extensive contribution to seeing the wall that divided Germany in Berlin torn down in 1989.

Certainly women in a man’s world as Margaret Thatcher was, needed to a have balls and she did, but with a bouffant hairdo, a brooch, pearls and a handbag as well. Albeit for a short time on the scale of history, she became the voice of Albion. 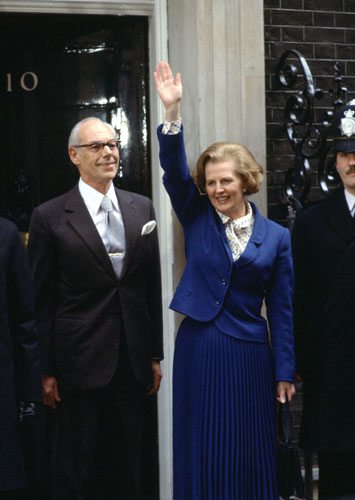 Margaret Thatcher ensured that during her time in the political sphere capability and charm went hand in hand together and it is poignant perhaps to note that most tributes pouring in since she died on April 8, report her as personally being very kind.

As she told it, she was inspired to pursue both a career and family passionately by an article she wrote entitled ‘Wake Up, Women’ published in the Sunday Graphic, 17 February 1952. She said in terms of a woman and career and family

“The idea that the family suffers is. I believe, quite mistaken. To carry on with a career stimulates the mind, provides a refreshing contact with the world outside—and so means that a wife can be a much better companion at home”.

In her article she also noted that the term “career woman” has unfortunately come to imply in many minds a “hard” woman devoid of all feminine characteristics’. A speech given by Margaret Thatcher in 1976 warned the world of the aim of the Soviet Union for domination and earned Margaret the sobriquet “the Iron Lady”. Her radically conservative economic ideas became known as ‘Thatcherism’.

She spoke out against immigration to the Commonwealth countries in 1979 as a threat to their culture and became known, more and more, for her direct confrontational style of politics.

Thatcher was never afraid to say it how it was or how she saw it. She was not afraid to enter the jungle or to mix it up with her enemies.

During the period of Britain’s ‘Winter of Discontent’ Thatcher dismantled nationalised industries and social services. She also weakened union power as she fought for victory for the conservative government. She won, becoming Prime Minister in May 1979.

She made powerful political allies of presidents and politicians garnering and gaining their respect and the public had a love or hate relationship with her.

There was seemingly no middle ground for Maggie, as she was affectionately known, and she was proof positive of ‘the power of one’.

Her tax reforms were indeed controversial, as were her reforms of the British National Health Service, accepting that Britain would be part of the greater European Exchange Rate Mechanism. 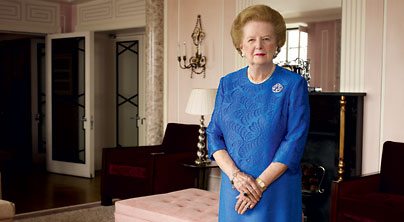 She fought inflation, high interest rates and high unemployment, especially when worldwide economic downturn aggravated economic problems at home. She went to war and won in the Falklands.

Although a populist, she knew that a political leader is often unpopular and accepted that she couldn’t win everyone to her view. If she believed she was right that was it, and forward she went.

By 1990 she was the prime minister with the longest continuous term in the UK’s history since the early 19th century. At that time, not a single other cabinet member from 1979, when she was first elected, was still serving. Several resigned in 1989 and 1990 over her policies.

When her position as head of the party was challenged and she saw that she had failed on the first ballot, although none of her challengers had won, she resigned. John Major, a Thatcherite was elected in her place.

She knew her time was up.

In March 1991, US President George H. W. Bush awarded Margaret Thatcher the US Medal of Freedom and in 1992 she was made a life peer as Baroness Thatcher of Kesteven. Vale Margaret Thatcher, all who encountered you were either enlightened or emboldened by the experience as you moved ever forward, putting the ‘great’ back before Britain.

STARGAZING LIVE, the BBC Series, will present once more on Australian Television May 22, 23 and May 24, 2018, beaming from ANU Siding Spring Observatory in NSW