Queen of Crime Fiction, aged 90, with plenty still to say

Not an obituary of much moment except to the Baroness’ immediate family and friends perhaps, unless you are interested in arrivals and departures from Britain’s stately homes.

When it becomes apparent that the Baroness of Holland Park’s daytime job was writing detective stories under the byline of P.D. James, suddenly her passing becomes a matter of great interest and importance.

Ms. James books, eagerly sought by fans worldwide, turned British crime writing upside down, when she forsook the plots of conventional police procedurals and propelled her characters into a real world of difficult sometimes sordid relationships. They became involved in violent confrontations where the line between black and white was often marked by shades of grey. 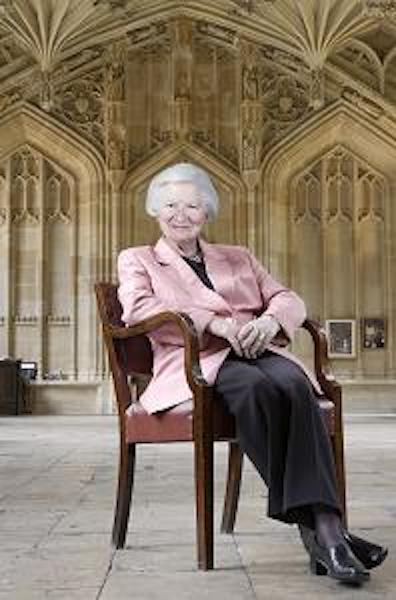 P.D. James was interested in how people reacted when they found themselves faced with issues of emotional intensity, issues that affected their lives in a profound way.

She was highly skilled at depicting with sensitivity and realism the turmoil that happens in a family group when an unexpected death or marriage breakup occurs, setting in motion events that have dire consequences for all concerned.

Cliches or stereotypical characters are never found in a P.D. James book, she wrote with imagination and a flair for mystery and suspense that made her books hard to put down until the final credits rolled.

Aged 94 when she died, James refused to accept that crime writing was inferior to so-called ‘literary’ novels which record the angst of urban relationships.

Her contention that good crime writers tell us more about societal conditions in the time in which they were written than novels which focus on characters without much reference to their prevailing lifestyle is a valid one.

Scotland Yard sleuth Adam Dalgliesh, P.D. James most popular character was a poet by nature but a policeman by occupation – difficult to realistically merge these two different pastimes into an appealing modern day character.

Easy though, for P.D. James; Dalgleish, maintained his gentlemanly manner, while, a step ahead of the bad guys and girls, he relentlessly pursued the cause of justice for all in ripper stories that reflected the problems police face in drug fuelled, crime ridden cities. 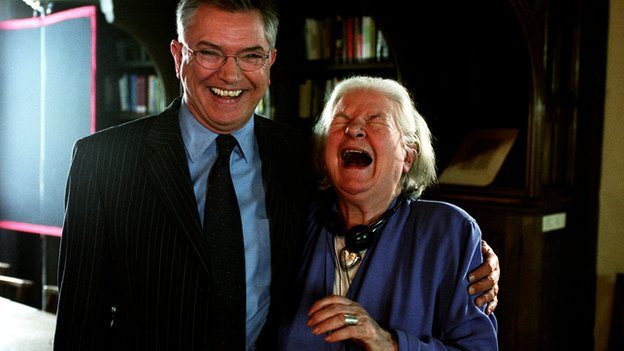 PD James with actor Martin Shaw who played Dalgliesh in BBC adaptations of her novels.

As well as Dalgliesh, James created the female detective Cordelia Gray, protagonist of “An Unsuitable Job for a Woman” and “The Skull Beneath the Skin.” 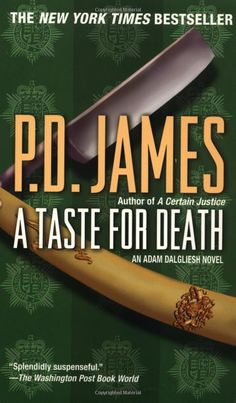 Both the Dalgleish and Cordelia Gray mysteries have been turned into popular television series.

James writing has been accused of tunnel vision snobbery because she had a preference for intelligent, well-educated, middle-class murderers who tried to justify their crimes by an explanation of the circumstances that lead them to cross the divide between right and wrong.

This is carping criticism of good writing… P.D. James, whoever her characters were or whatever the situation they found themselves in has left behind a body of exceptionally well-written crime novels.

Phyllis Dorothy James was born in Oxford on Aug. 3, 1920. Her father was a tax collector but unfortunately didn’t make enough money to provide P.D. James with the college education she would so much have appreciated.

As a child, similar to another ‘Queen of Crime’, Agatha Christie, she was interested in mysteries and death and had a strong desire to become a novelist.

James was though, a late entrant in the literary stakes, not beginning to produce her mysteries until she neared 40 and then only having time to write in the early morning as her civil service job with which she supported her family took precedence.

Tragically, her husband, Connor Bantry White, returned from the war mentally broken and unable to recover, died in 1964. Employment with the National Health Service progressed to the Home Office, where she worked in the forensic science department and then the criminal law department.

A first novel, “Cover Her Face,” was published in 1962 under her maiden name of Phyllis White. Well received by critics, she continued to work in the Home Office until 1979.

The publication of her eighth book, “Innocent Blood,” in 1980 guaranteed her a place in the top echelon of crime writers. The book, a huge success, she found international popularity and a fan base that increased exponentially with every successive book.

“Monday, I was ticking along as usual, and by Friday I was a millionaire,” P.D. James commented on her sudden rise to the attention of crime fans worldwide.

Her work was not confined to the mystery genre. A 1992 science fiction novel “The Children of Men,” about future shock in which humanity becomes infertile, was made into a critically praised 2006 movie by Alfonso Cuaron.

In 1987 The Crime Writers’ Association gave P.D. James its Diamond Dagger award for lifetime achievement, and in 2005 the National Arts Club presented James with its Medal of Honor for Literature.

Queen Elizabeth II made her Baroness James of Holland Park in 1991, in recognition of her work as a governor of the BBC, a position she held from 1988 to 1993. 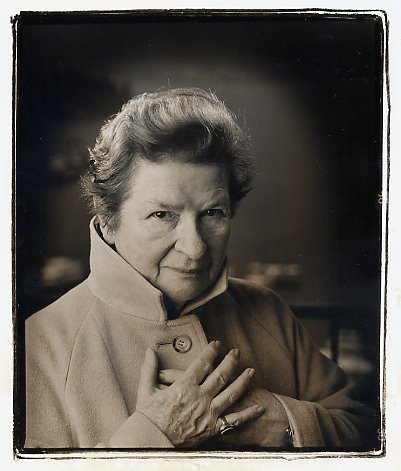 James represented the Conservative Party in the House of Lords, but did not always follow the path of conservatism.

She took her position of Governor at the BBC seriously and controversially tackled the corporation’s director Mark Thompson on her radio program.

A woman of strong influential opinions, she demanded to know why the “unwieldy bureaucratic” organisation he headed had not only lost its way but was paying its executives exorbitant salaries. This broadcast prompted and sustained public debate on the role of the BBC in modern day Britain.

A member of the Church of England’s Liturgical Commission, James had doubts about the modernized Book of Common Prayer; the 16th- and 17th-century Anglican service book famous for the beauty of its language. “Something vital is lost, surely, when ‘Let not your heart be troubled’ is translated as ‘Do not be worried and upset,'” she said.

P.D. James, as a prominent figure in the arts world, was influential in bringing to public attention problems in government organisations which otherwise would have passed unexplained and unnoticed. In 2013 she published “Death Comes to Pemberley,” introducing a murder mystery into the world of Jane Austen’s “Pride and Prejudice.” Matthew Rhys as Mr. Darcy in Death Comes to Pemberley …

“Death Comes to Pemberley” was subsequently made into a television series which is currently being shown in Australia.

A marvellous nineteenth century melodrama with men in tight breeches and women frequently succumbing to the vapours, it has, as you would expect from the pen of P.D. James, characterisation in keeping with the time and the spirit of Jane Austin’s classic novel.

Elizabeth Bennett, forthright but lacking in confidence, Mr. Darcy, dishy and withdrawn along with all of Ms. Austen’s other cast list, faithfully reproduced with the addition of a body, found bloodied and decidedly dead in the woods near Pemberley.

Great stuff… don’t miss the book or the tv series.

Faber, James’ publisher for more than 50 years, issued a statement on her passing, commenting that she had been “so very remarkable in every aspect of her life, an inspiration and great friend to us all. It is a privilege to publish her extraordinary books. Working with her was always the best of times, full of joy. We will miss her hugely.”

And so will crime fans everywhere – R.I.P. Phyllis Dorothy James, Baroness of Holland Park, a woman of influence and remarkable substance.