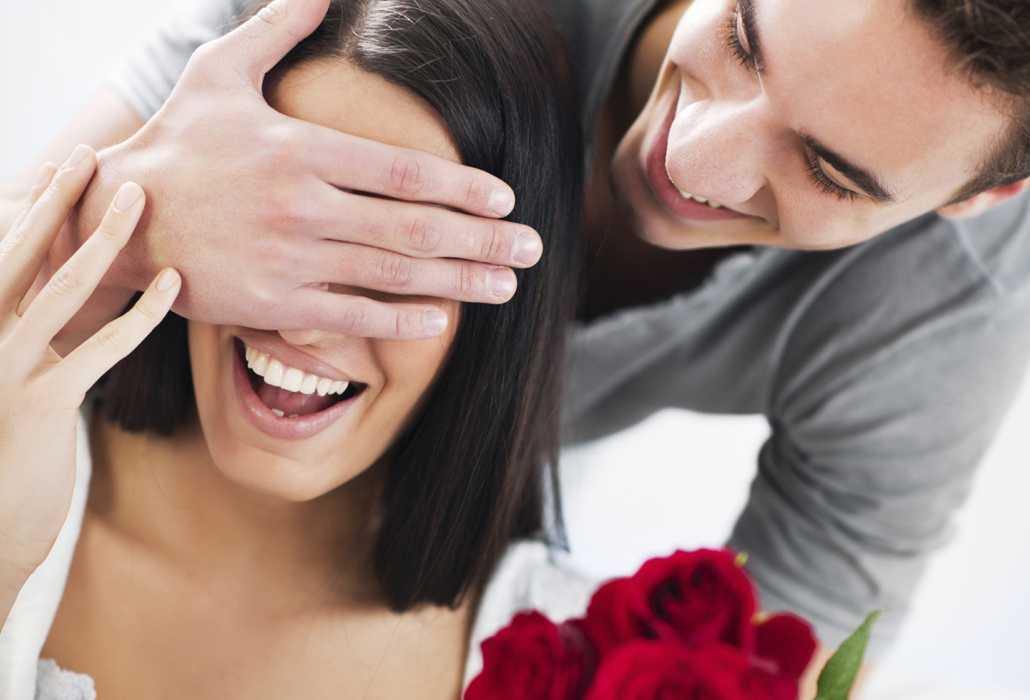 Looking for a special gift for your loved one this Valentine’s Day?

One not only romantic, but also perhaps just a little ‘avant garde’?  Take the love of your life to visit the National Gallery of Australia in Canberra. 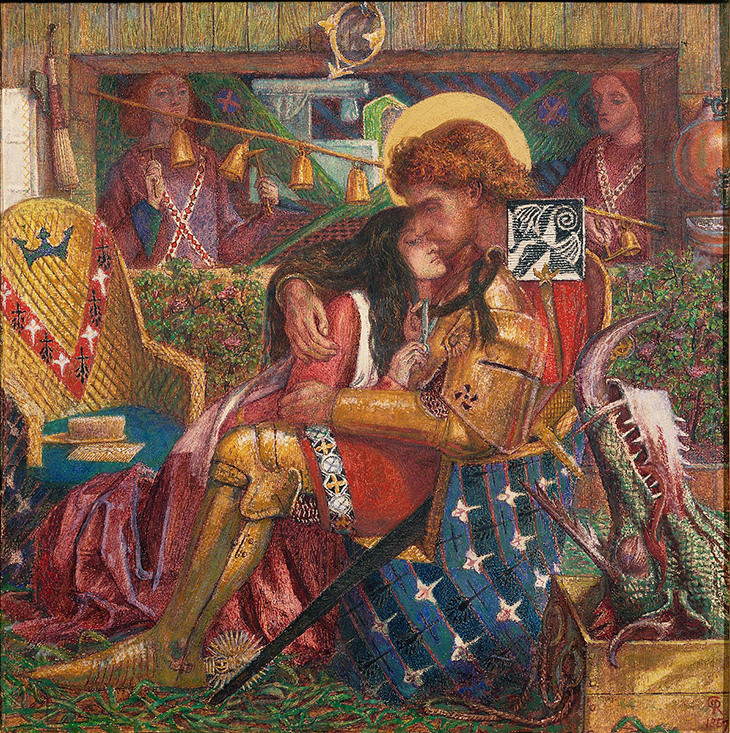 There you will be able to view the stunning once in a lifetime exhibition, Love and Desire: Pre-Raphaelite Masterpieces from the Tate at London, now on show until 28 April 2019.

Featuring more than 100 works by 21 artists, the exhibition ‘is an exclusive insight into the rebellious and revolutionary world of the ground-breaking art movement’. Exploring the themes of love, lust, desire, romance, betrayal, faith, nature, science, religion, society, rebellion, the femme fatale and celebrity of the ‘rock-star’ artists of the nineteenth century, in the medieval-modern artworks of the Pre-Raphaelite Brotherhood, you will find many of the greatest love stories of history.

It’s sure to be a surprising and dazzling encounter. 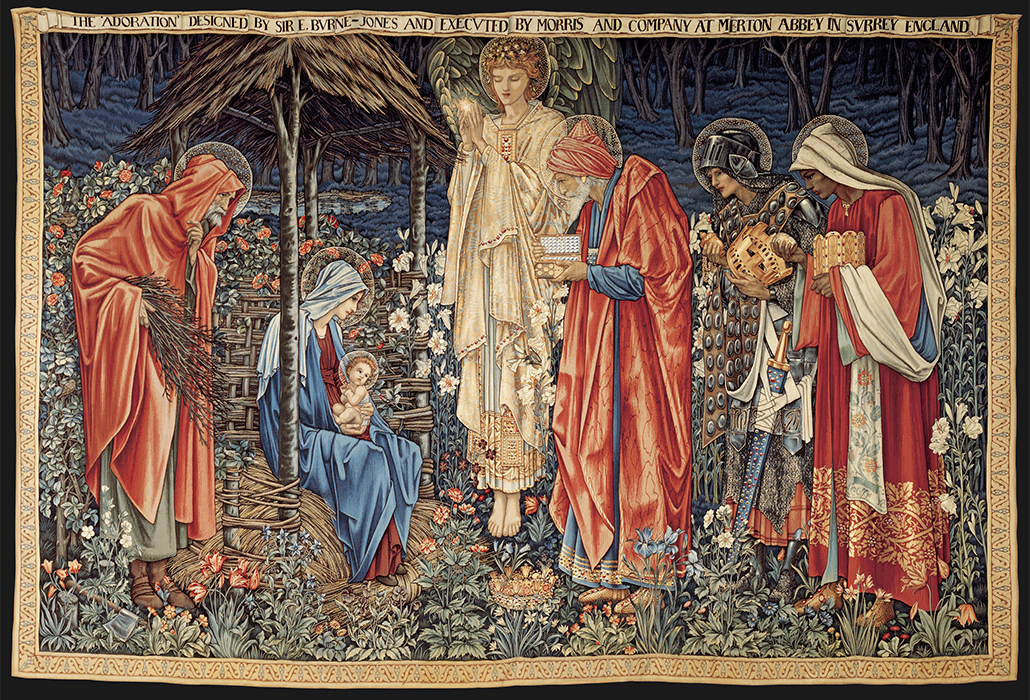 Pre-Raphaelite art was sometimes sexy while at other times, quite raw. It combined medieval romanticism with ideas and dreams of modern life, producing poetic scenes, portraits and landscapes, which were rich in symbolism.

Unlike most other art movements that evolved in time from the intellectual, political, philosophical and social milieu of their age, the Pre-Raphaelite Brotherhood gave conscious birth to itself, choosing its own name. In England during the early years of the nineteenth century, the cult of the ‘picturesque’ achieved its fullest expression in the broadening of sensibility so buildings came to be appreciated for the pleasurable or fearful thoughts and feelings they inspired.

When associated with a search for Arcady (Arcadia), the pleasant land, idealized by ancient Greeks where shepherds and shepherdesses frolicked about without a care in the world, architecture and nature were blended in a pictorial effect. Naturalistically rendered designs also appeared on fine furniture, textiles, pottery and porcelains, glassware, silver, marvelous mirrors, wallpapers and much more. Desperate Romantics all, the Pre-Raphaelites was founded in 1848 by seven artists: Dante Gabriel Rossetti, William Michael Rossetti, William Holman Hunt, James Collinson, John Everett Millais, Frederic George Stephens, and Thomas Woolner. They all declared their intention ‘to study nature attentively so as to know how to express genuine ideas’. 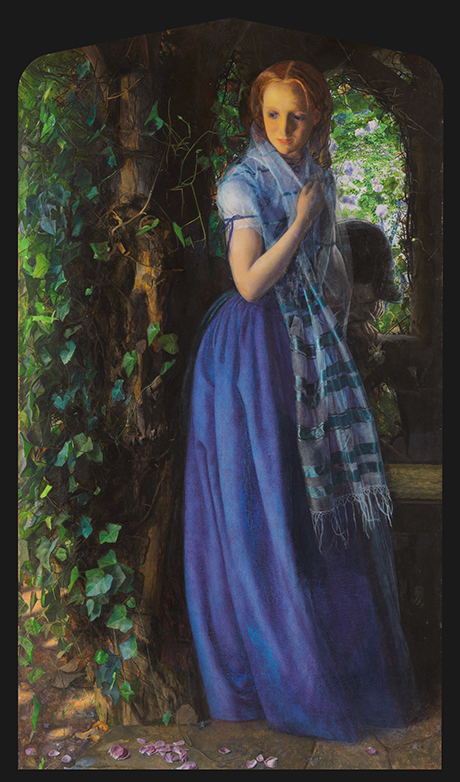 Our unlikely heroes were at the forefront of change, with Holman Hunt later recalling, how he and Millais had been criticizing Raphael’s Transfiguration when another student commented ‘Then you are pre-Raphaelites”.

• to sympathize with what had been direct, serious and heartfelt in previous art

• and, most importantly, to produce thoroughly good pictures and statues

The movement was fired by the vision of ‘sublime innocence and transparency of colour’ evident in art before the age of Italian Renaissance artist Raphael (Raffaello Santi de Urbino, 1483-1520).

He was considered by those setting the curriculum, to have attained the highest degree of perfection in art before their time. Students were encouraged to draw from his examples, rather than from nature itself, which by this time, was very much to the fore in people’s minds.

So, the Pre-Raphaelites rejected the idea. 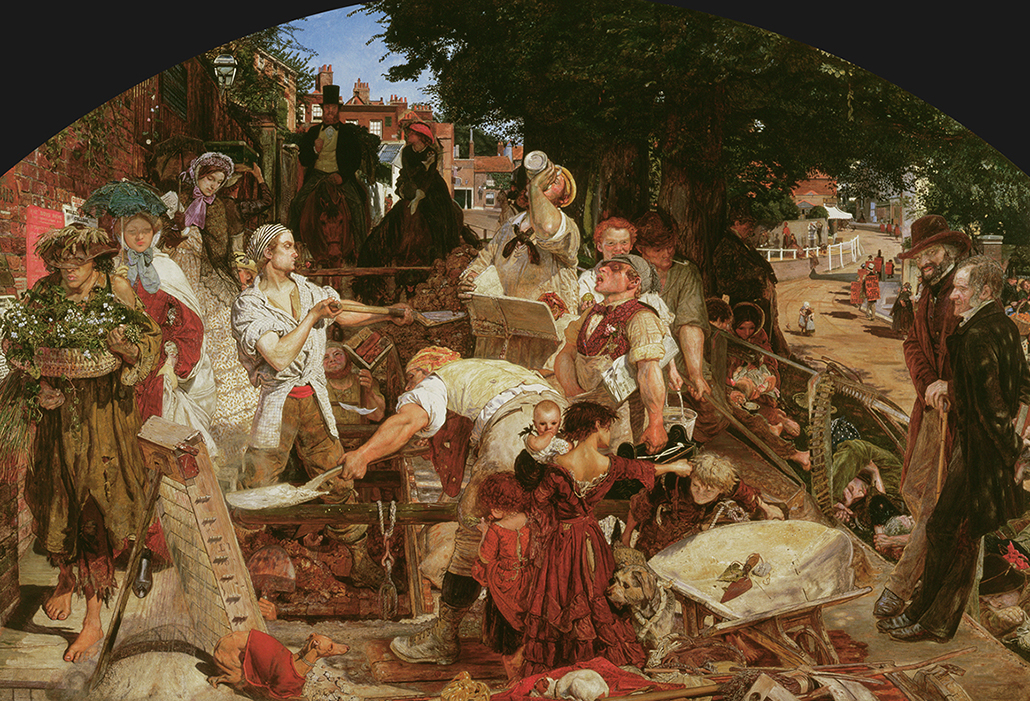 In mid Victorian London people were seeking to break free from the narrow minded medieval styled social conventions of their day to explore a daringly different bohemian lifestyle.

Pre-Raphaelites were exclusively male, their women all female icons of indelible style. The Arming and Departure of the Knights. Number 2 of the Holy Grail tapestries woven by Morris & Co. 1891-94 for Stanmore Hall – detail

Most prominent among them were Lizzie Sidal, Annie Miller, Fanny Cornforth and Janey Bourdon, the latter being the influential wife of designer William Morris, leader of the Arts and Craft movement.

Sir Sloshua (Joshua) Reynolds as they re-named the first head of the Royal Academy, was their chief hate-figure. 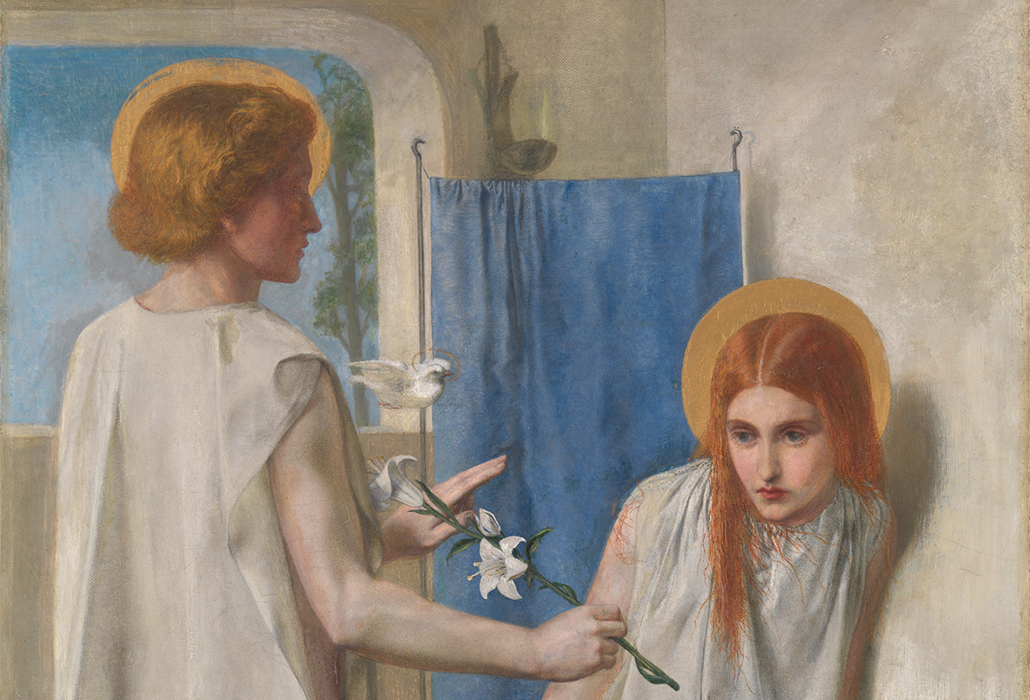 The Pre-Raphaelites wanted to influence their audience by using precise and heightened attention to detail, such as painting real people with dirty toe nails.

Hunt and Millais developed a technique using thin glazes of pigment over a wet white ground in the hope the colours would retain their jewel-like transparency and clarity. 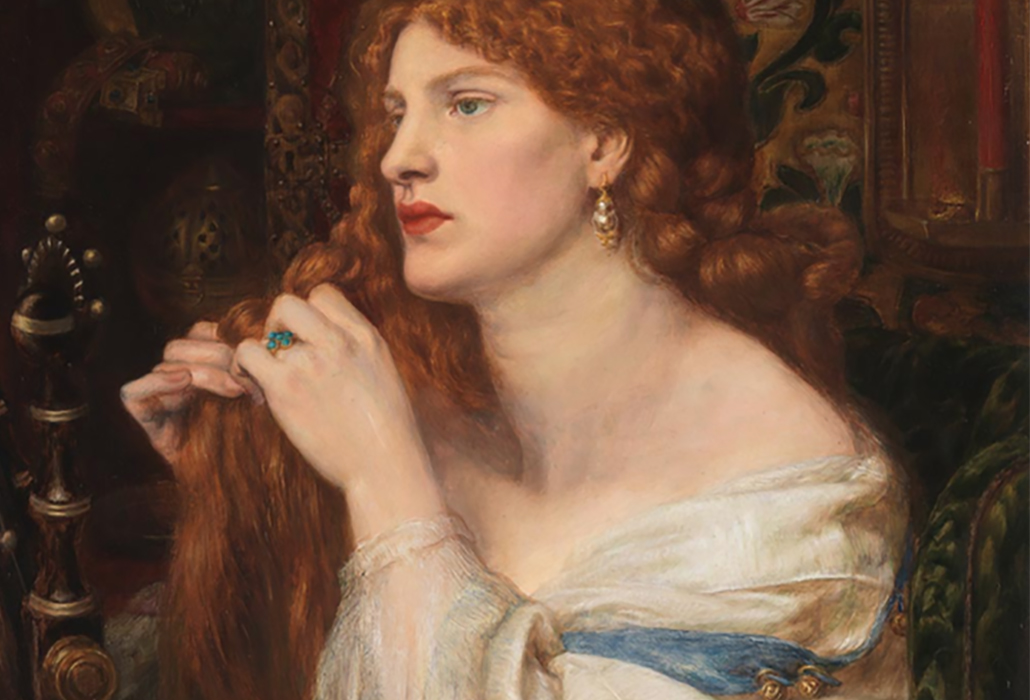 An emphasis on brilliance of colour was a reaction to the excessive use of bitumen by earlier British artists, which produced unstable areas of muddy darkness, an effect the Pre-Raphaelites despised.

They attracted much virulent criticism from people like renowned author Charles Dickens who likened Millais’s Virgin to a ‘monster in the vilest cabaret in France or in the lowest gin-shop in England. 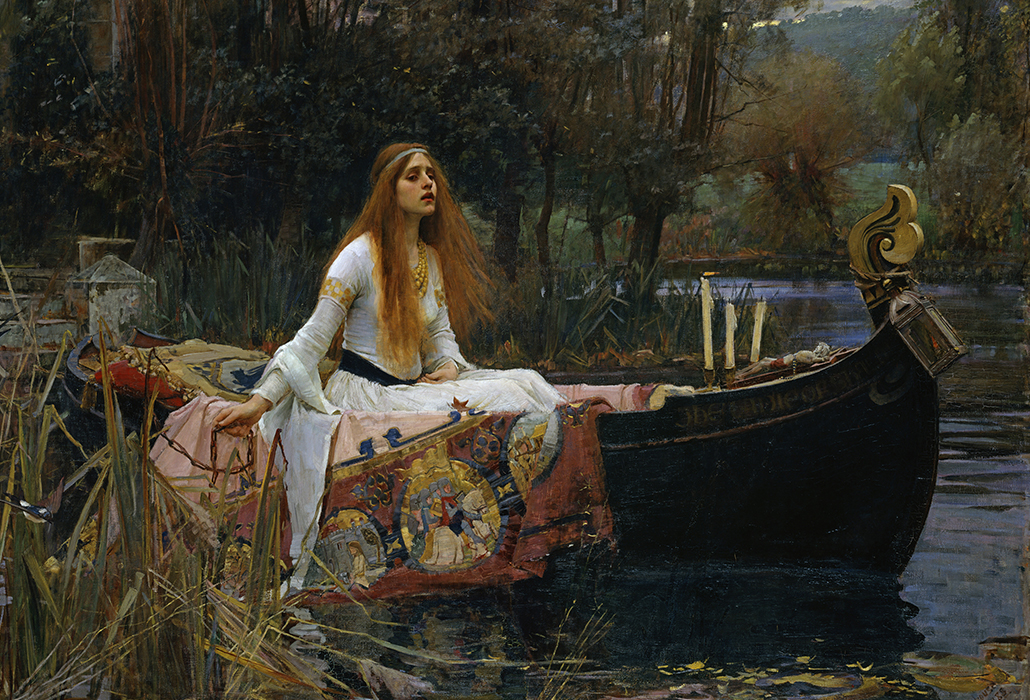 The Pre-Raphaelite Brotherhood flourished only for a few brief years, recalled Dante Gabriel later, as ‘the visionary vanities of half a dozen boys’. While it lasted, they influenced many other artists who followed, including John William Waterhouse (1849-1917).

The Tate at London has temporarily parted with both John Everett Millais’ Ophelia and John William Waterhouse’s The Lady of Shalott, for they have never left the walls of the gallery at the same time, such is their star power. Waterhouse completed three images altogether from the Tennyson poem of the Lady of Shalott, all of which heavily drew their inspiration from the works of the Pre-Raphaelite’s, although his technique was very different to theirs, like his heroes, he provoked and beguiled with rich imagery, ravishing colours and romantic themes.

However, his works became outmoded during his lifetime, for the style he championed remained virtually unchanged, while the world changed around him with new ideas of modernity gained a solid foothold.

Today a journey with the works of the Pre-Raphaelites is all about romance. Roses given in love with tickets to this wondrous show, a must.

Love and Desire: Pre-Raphaelite Masterpieces from the Tate at London