National Gallery of Victoria (NGV) Director Tony Ellwood was entirely animated when launching the eagerly anticipated world-premiere exhibition on the arts calendar this year, Van Gogh and the Seasons, which is exclusive to the NGV at Melbourne. The painting chosen to illustrate the show a wheatfield, with cypresses was completed in early September 1889 by the artist at Saint Remy, near the end of his life. It is an outstanding work and the artist, despite his many troubles at the time, proved himself to be at a pinnacle of his artistic achievement. Van Gogh and the Seasons is a very fine tribute to the Dutch born artist Vincent van Gogh (1853-1890) and his amazing legacy to the world at large, which continues to ‘inspire artists and captivate the public’.

Appropriately, a wonderful self-portrait of the red haired Vincent is a powerful statement of the man and his style. On loan from the Musée d’Orsay at Paris it was painted in autumn, certainly one of the artist’s most favoured seasons, just right for the Winter Masterpieces show held annually in Melbourne.

The Kröller-Muller Museum, Otterlo and the Van Gogh Museum, Amsterdam has lent some 50 artworks. They hold the two largest collections of works by the talented Vincent Van Gogh, a young man whose career and life was spent by the time he was 37. Independent art historian and former Head of Collections at the Van Gogh Museum Sjraar van Heughten curated the exhibition, assisted by NGV curator Tedd Gott. During the course of an interview with NGV Director Tony Ellwood, Sjraar van Heughten dispelled for the media some of the mythology that has grown up around Vincent the man. For instance he was never poor, and he did not worry about money unduly. Vincent van Gogh’s younger brother Theodorus (Theo) was a successful art dealer. He not only gave his brother whom he understood more than anyone else, praise and encouragement, but also unfailing emotional and financial support.

Vincent van Gogh did make sales in his lifetime, despite his career only lasting a decade, with just those few short years at Arles in the south of France being his most productive.

I was surprised at how different his Vase with honesty autumn-winter painted early in his career, when he was living with his parents in the vicarage at Nuenen in The Netherlands (December 1883 – November 1885), was from his later works in both colouring and composition. It was during this period that van Gogh was doing his best to perfect his style by concentrating on producing still life, landscape and genre paintings A sketch from this time in pen and brown ink with white heightening is of the parsonage garden, which was painted in winter 1884. Van Heughten considered this wonderfully detailed drawing one of the artist’s finest. The parsonage garden was quite extensive, judging by the painting in the snow of January 1885, on loan from the Armand Hammer Collection, Los Angeles.

Throughout his adult life Van Gogh wrote profusely to Theo, to artist friend Paul Gauguin, to Emile Bernard and yet others. Today his letters, preserved for posterity, provide a window for us onto the world the artist knew, one that spoke of another time and place.

When Vincent died aged 37, Theo was so distraught and unable to come to terms with his loss, that he died six months later aged 33. It was a double tragedy because Theo was instrumental in introducing contemporary Dutch and French art to the public at large. 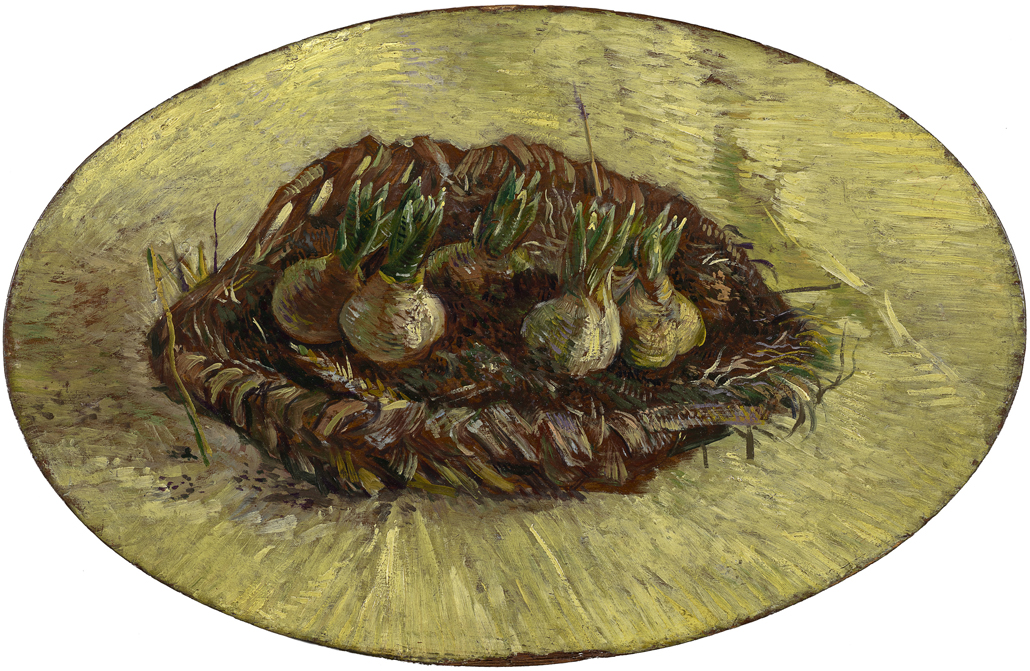 I love that each work of art has been displayed on a wall by itself, with nothing to distract you from studying and enjoying every nuance and brushstroke first hand. Collectively they reveal Vincent’s deep love of nature and the four seasons, which he believed reflected different phases of the human life cycle. Installation view of Van Gogh and the Seasons at the National Gallery of Victoria, Melbourne. Photo: Tom Ross

His peers considered Van Gogh a master of his craft. This dynamic show of all seasons and for all seasons, reveals the glories of the world Vincent Van Gogh knew at a golden point in its history. Van Gogh successfully used line to describe the surfaces of his works so well.

They suggest powerfully both direction and movement, whether they were of flower-studded gardens, shimmering wheat fields, snow-dusted churchyards or stunning autumnal landscapes. He loved to paint en plein air, with spring, summer and autumn providing weather conducive for him to do this, with winter being the smallest section of the exhibition understandably. Not to many people would want to stand knee deep in the snow to paint for even the shortest of times.

Van Gogh wrote in his letter to his sister Wilhelmina in 1888 from the Yellow House at Arles in the south of France … my house here is painted out in fresh butter yellow, with raw-green shutters, and it sits full in the sun on the square where there is a green garden, plane trees, pink laurels, acacias. Inside its completely whitewashed and the floor is red brick. And the intense blue sky above… During his time spent at Arles, whose history is linked to that of Provence, Van Gogh connected with nature throughout the four seasons.

From the fragility of the blossoms in an orchard to the glimmering of fields of golden wheat as far as the eye could see he used colour primarily for its emotive appeal. While at Nuenen he had created scenes of dark peasant poverty while at Arles, Van Gogh perhaps feeling liberated for the first time in his life, he embraced with alacrity, the intensity of the colours of a Provencal landscape.

Provence, Provence, even the name evokes images in the mind of brilliant Van Gogh sunshine and sunflowers basking their golden heads. You can almost taste the piquant fresh goat cheeses and the enticing soft bouquet of the wine in a place where the air is clear and clean, swept by the relentless mistral, and where the soothing smell of lavender wafts in on the slightest breeze.

To Paul Gaugin from Arles he wrote in 1888… ‘I believe that once here, like me, you’ll be seized with a fury to paint the autumn effects, in between spells of the mistral. And that you’ll understand that I’ve insisted that you come now that there are some very beautiful days’… Two of my favourite works were painted at Saint-Rémy where Vincent van Gogh would spend one year in the asylum after cutting off part of his left ear at Arles. The garden of the asylum at Saint-Remy, May 1889 is an oil on canvas, a wonderful example of his understanding of perspective. This was a sad period for Vincent, as he battled his own personal demons although out of all that darkness he would produce some of his most exquisite landscapes such as his Pine Trees against a Red Sky with Setting Sun, inspired by his love for Japanese prints and his collection of these are also part of the fabulous display.

Van Gogh’s life was filled with tragedy and it is a miracle in so many ways that he produced the wondrous works he did before it finally ended so dramatically, in suicide. However despite all that sadness when you bring many of his images to mind you realise they have made a lasting impression. Organised by the NGV and Art Exhibitions Australia Van Gogh and the Seasons is accompanied by a scholarly catalogue, a children’s publication, a dynamic program of talks, tours and events and the curated NGV Friday Nights Program, which features live music, food and performances. There is also a major multi media installation showing the ‘seasons’ as being of eternal interest to artists through time, in many different cultures and eras. A very fine video commissioned by the NGV goes for nine minutes, which you can watch in a custom built theatre before viewing the show. If you can be patient, I would recommend it, as a highly important and informative thing to do before you take in the splendours of the art collection. ‘But when will I do the starry sky, then, that painting that’s always on my mind? Alas, alas, it’s just as our excellent pal Cyprien says, in ‘En ménage’… the most beautiful paintings are those one dreams of while smoking a pipe in one’s bed, but which one doesn’t make’ *

Van Gogh and the Seasons Velvet says Jo Bayley of Fashion Elixir is a textile whose plush surface enriches my life on a divine chair, as a dress. a pair of flares or select home wares