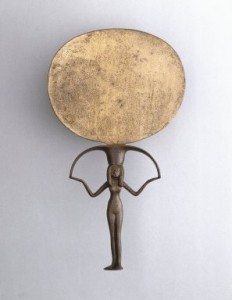 The earliest mirrors were made from a metal alloy that were often engraved with decorative figurative scenes This mirror is made from silver and copper alloy and comes from ancient Egypt dating from 1478-1390 BCE. It has been cast in one piece. Today we associate glass with mirror, but it was a long time before metals and glass were brought together to make what we would call a mirror.  Most archaeological evidence of a glass mirror dates from the 3rd century and comes from Egypt, Gaul, Asia Minor and Germany. Digs in Egypt have uncovered mirrors backed with lead that have glass with a convex curve behind the lead over which a coating of gold or tin had been applied. Variations on this process prevailed it seems for centuries well into the Middle Ages. During the Roman Empire woman and men used mirrors and not only the elite, servants also acquired mirrors at that time.  The Romans valued obsidian, a very black transparent volcanic rock for its reflective powers. Archaeologists have established mirrors in the’ Golden House’ of the Emperor Nero were made of a reflective phengite, that ‘gave off such a dazzling glow they overpowered the natural light of day”. Light was that intangible phenomenon by which our world was made visible and was therefore symbolic of goodness, revelation and beauty and became the focal point of philosophical argument and theories in all the different religions of the world and their cultures. This mirror, discovered in 1895 at Boscoreale in Italy dates from the 1st century is made of silver with traces of gilding and is in the Musée du Louvre, Paris. 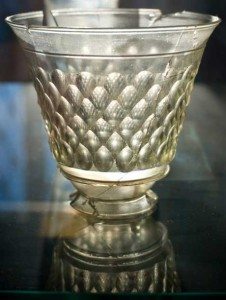 Glass in its earliest form was not blown, but moulded, using tools to shape and form it. Romans were producing glass in some quantity from the first century with shards, fragments and vessels found in the ruins of Roman sites and at Pompeii, where glass vessels are clearly depicted in wall painting. The Romans became very proficient at blowing glass and used lead to strengthen it.