The quality of mercy is not strained.
It droppeth as the gentle rain from heaven
Upon the place beneath. It is twice blest:
It blesseth him that gives and him that takes*. 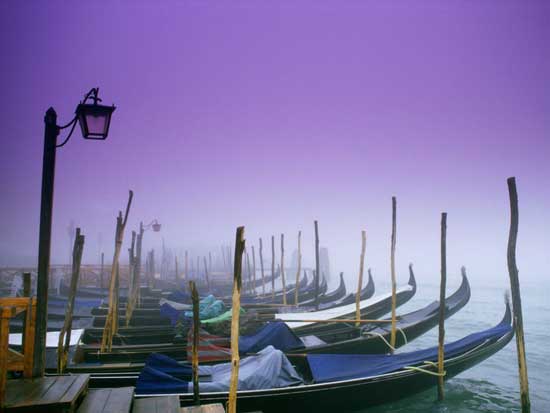 My catch cry over the years is that if life is to be considered any sort of adventure at all to enjoy it we must be ready in 20 minutes to go to Venice. Well I am a Sagitarrian and for us spontaneous adventures of such a kind are indeed very appealing. So my pull on international bag is always at the ready to pack my mix and match black apparel to go and visit the most serene republic of Venice. I can collect all the colour I want once I am there. Gliding over the waters of the Grand Canal in a gorgeous gondola has to be experienced, whatever the cost. First mentioned in 697 when they transported a nobleman from the water gate of his palace to that of another palace by the most direct water route at twilight they still remain the most romantic of sights in this most romantic of world cities. 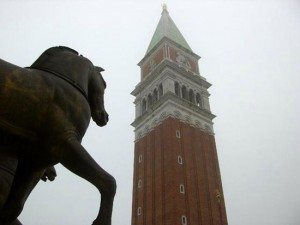 My first visit thirty years ago (eeks) won me over completely. Amazingly colourful at carnival time, its extraordinary history has included dark as well as uplifting moments. Over the years I have written and lectured a great deal about the art and architecture of this glorious  canal city. It is today still a place in which west and east can meet in the passionate pursuit of knowledge and cultural pursuits; enjoy its appealing atmosphere and truly scrumptious culinary delights. 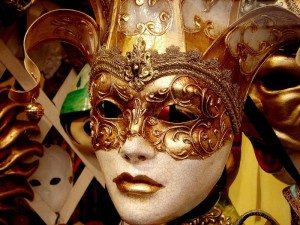 Some dear friends and my second son and his wife all spent magical moments there recently. They reported they had completely fallen under its spell, despite it being the time for high water. This is when you have to traverse its multitude of treasures walking on raised boards, well that is if you want to keep your feet dry. When I was a child we were told it would disappear soon but I am so glad it has continued to keep its heart and soul above the threat of rising tides. The ancient city of Byzantium and its style first influenced the ecclesiastical (Gothic) architecture of Venice, which was founded in a salt-water lagoon formed in prehistoric times. It created a unique look that combines the exotic with the divine. The neoclassical style was another layer added much later.

St Mark’s Cathedral at Venice was described by visiting nineteenth century English art critic John Ruskin as ‘a vision out of the earth…a treasure heap it seems, partly of gold and partly of opal and mother of pearl’ and his observations were spot on. Venice consists of 118 flat islets packed closely together. The early settlers escaped being massacred by the marauding Goths, Huns and Lombards by seeking safety on these islands were they set about cornering the salt trade to keep them alive.  They discovered a solid layer of clay beneath the soft mud covering of the islands could hold buildings if large vertical piles were driven down into the substratum. A horizontal layer of piling on top then provided the foundations for almost all of Venice’s 20,000 or so buildings.

Its more than extraordinary. Following the attempted invasion of the islands by Pepin, son of Charlemagne in 810 the inhabitants moved to the increased safety of the Rialto which meant high embankment, the beginning of Venice. The Arsenal was first built in 1104, the word Arsenal a Venetian invention coming from the Arabic word for ‘house of industry (darsina’a). Though protected by the sea and the lagoon Venice was the only major power without a fortress so the first major building to be fortified was the essential shipyard. At its peak 16000 craftsmen could turn out an entire fighting galley in a single day. The Arsenalotti as the men were called were a privileged elite and lived with their families within its walls. 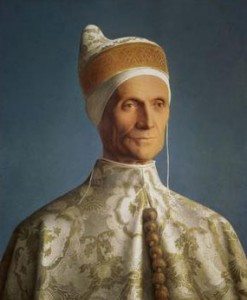 Doge Leonardo Loredan was depicted by Bellini wearing a gold brocade robe woven with a pomegranate pattern popular around the beginning of the sixteenth centuries. The Lion is the emblem of Venice. It  guards the arsenal and the one that decorated the land gate in 1460 still exists. When Carpaccio painted a canvas of the lion he did not forget to include a grace note ‘Pax tibi Marce Evangelista meus’ (Peace unto you, Mark my Evangelist) – to signify that among the Venetian people Mark would find rest, veneration and honour. These words were written in the book held open by the winged lion’s paw, symbolic of the formidable power and intentions of the Most Serene Republic.

Venice is La Serenissima (Most Serene Republic) a title bestowed upon the city by a Pope at Rome during one of the rare periods when Venice and the Pope were not at war with each other. Its history of 1100 years is littered with warring, plotting of wars, profiteering from other nations wars and counting the loot brought home. A city only the size of New York’s central park Venice overwhelmed Constantinople the greatest and richest city on earth in and by 1500 it was the largest empire in the west. 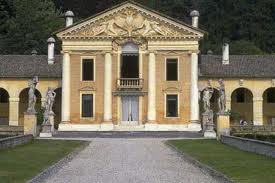 The Venetian senate passed a bill in 1530 to encourage land reclamation in the swampy countryside neighboring Venice.  Venice’s leading and wealthiest citizens then undertook the construction of country houses where space was abundant as it never had been in Venice and the new landowners sought to build homes that were more cost effective than their smaller Palazzi in the town.

The Barbaro brothers decided to build their villa at Maser and became patrons of an architect they had heard about and gave him the commission. He is the architect believed today to be Italy’s foremost architectural genius, Andrea Palladio  (1508-1580). He was a man in history in the right place at the right time with exactly the knowledge and skills necessary to provide his patrons with villas in the countryside.

He could also accommodate their needs to have economy by building them in rough brickwork and finishing them in stucco coating a much cheaper method building than out of stone, as was the style of building being raised in the city at the time. He similarly was able to construct the required classical columns, establishing their links to antiquity and reflecting the fact that the owner could trace his ancestry back a long way. 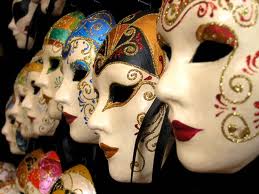 Throughout all the changes of style in Europe, Venetian painting for several centuries projected a consistent image of prosperity, grandeur and the glory of the Republic where life was celebrated daily in the form of regattas on the lagoon.  The carnival provided the opportunity for a magical display of Venetian carnival costumes. The Venetians practiced the pursuit of happiness relentlessly and it was a grotesquely clothed government official who gave permission for the wearing of the mask during the duration of the Carnival. 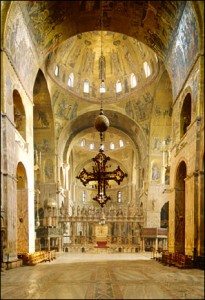 Noblemen and beggars, women of the town as well as courtesans and princes, universally wore masks. Most were white, others black and a few had long comic noses like Punchinello.

Made of silk or velvet they formed part of a mantle which could be folded back and clipped to the hat when no longer required the carnival reaching its climax in the presence of the Doge and the Signora in their robes of state.

It is an amazing statistic that in all of history there has only been about three million Venetians. About 85,000 people live in historic Venice today. It has managed to remain free of the hustle and bustle of the rest of the civilized world. The penultimate things to do is eat out at night under the stars in St Mark’s Square or take a ride to Torcello a divine island in the lagoon, which has the most fabulous restaurant to dine out at Locanda Cipriani, read about it and drool.

Aaaagh Venice – La Serenissima, you are definitely the penultimate place to visit

* William Shakespeare, The Merchant of Venice

The bronze Meroë Head of Augustus, which was excavated by Professor John Garstang (1876-1956) in the Sudan in 1910, has gone on display at The British Museum