The success of iTV British Crime Drama Series VERA over six series 2011 – 2016, is backed up by statistics revealing the steady engagement of some six million plus viewers each year during that time, as well as critical acclaim.

The television program that dramatizes the stories of the murders she solves have been brought forth by various screenwriters from Ann Cleeves’ novels with some episodes especially written for TV. Each series offers four stand-alone feature length films and has an amazing advantage and reason for such a great success, actor Brenda Blethyn, who features in the title role.

Ann Cleeves gifted her witty, sharp, straight talking shambolic Vera, with creative, clever, although complex characteristics all integral to being born on April 21 and living and working in such a wild beautiful place. Pisces people are definitely elusive, but blessed with an unsurpassed understanding of the human condition, certainly a necessary attribute for a great detective.

Vera is the prickly career woman she wants people to see and comes complete with independent spirit, steely exterior and a hidden heart of gold. She can do what she likes, when she likes as she has no family obligations. Her wardrobe of workhorse clothing, includes a trusty array of ‘MacIntoshes’ (not computers, coats), rain hats, scarves and very thick stockings that not only hide her legs, but also keep out the renowned North Country chill.

Vera exudes dignity as a quality; a kind of excellence that grows in importance as the series proceeds, which is all about being honourable in all aspects of your life. Honesty is something she rarely encounters and when she does she both values and admires it.

Like so many fine English actors, Brenda Blethyn OBE has a foundation in English theatre, surely one of the best training grounds in the world for actors.

She did not tread the boards from her school days, only enrolling in the Guildford School of acting when she had a decade and more of experience working in the real world behind her, while dabbling in amateur theatrics.

Joining the Royal National theatre 1976-1979 she impressed many appearing first in performances by such great playwrights as William Shakespeare, Christopher Marlowe, Leo Tolstoy and Alan Ayckbourn. Unable to remain cooped up in an office or confined for long in one place, getting out and about to solve her crimes suits Vera to a tee.

She learned her own craft under the follow the leader patronising patriarchal management operating in the days of the ‘old bill’. Nowadays in her maturity, she reveals how open minded women in top jobs as she is, can be and are far more amenable. Especially with a handsome young man to mentor riding along at her side.

We’re are not surprised, as throughout the series she is constantly running into men from her past, who are still around and have had to change their attitude, regarding women as colleagues not chattels.

The only demands she makes of all those who work on her team is that they treat everyone as an equal and with great care and respect, especially those who have lost their lives in violent circumstances. The setting for the series is in England’s least densely populated and coldest county, a landscape with a history of revolt and rebellion, which took place on wide open plains, windswept moors, along the rugged coastline, in the rain swept hills and on the undeveloped land lying on the Anglo-Scottish border.

In Series 1 – 4 David Leon as Detective Constable Joe Ashworth grew in experience and stature while initially following in her wake. By the time he was ready to leave and be his own man, he was fully walking by her side.

When I talk to people about the current episodes of Vera they say they all miss Joe. All the series have four episodes and it was Series 5 when Kenny Doughty took Joe’s place, joining Vera’s as her new Detective Sergeant Aiden Healy. Vera having a wealth of experience and getting into the often mentally disturbed mind of a killer, is something you don’t learn except when you do get out and about talking to people, which Aiden soon discovers and realizes.

Aiden will have to learn, as they all have before him how to freely give his time, attention and respect, because theories don’t always work in Vera’s classroom.

While Aiden is on his fast learning curve with Vera at first he doesn’t defer as much to his boss as perhaps Joe did – he was a little bit more old school.

Determined to be his own man, Aiden can be brash at times, having that invincible arrogance of youth after all he’s far better educated and savvy at technology than his ageing boss.

That’s fine by Vera; she knows it’s changing times and she likes the ‘twinkle’ in his eyes and does have an enormous amount of patience. It does mean Aiden will make his mistakes publicly and accordingly, just have to learn to live with some embarrassment.

Vera’s dogged but quiet determination to find the truth and her persistence, often in the face of very big odds to flush it out, is more than impressive. She has a lot of help from the forensic team, headed up by Dr Marcus Summer (Kingsley Ben-Adir), who doesn’t warm to her always wanting him to expand his boundaries as a forensic pathologist, giving her just enough speculation to let her imagination take over.

The complexity of the plots surrounding the murders and characterizations of the people involved, are all richly presented and poignantly rendered by the fine ensemble cast supporting Brenda Blethyn.

Kenny (Jon Morrison) is one of the old guard and has been on Vera’s team from the very beginning.

He’s usually confined by Vera to his desk or sent to the basement to uncover the past, because he helps get the job done. Just now and again, he gets to go out with her.

Like all her team he is used to Vera’s prickly nature and unusual methods of investigation. DC Bethany Whelan (Cush Jumbo) has been around for a while, confident firm and trustworthy, nothing like the ‘crime family’ she emerged from and is trying to prove she’s better than.

She is both efficient and assertive although she does have a tendency to rush things and miss details and this becomes her undoing in Episode 1 of Series 6.

This finds Vera and the team following a Dark Road to get to the truth, to discover who murdered a 56 year old grandmother on the moors

Vera won’t recommend Bethany for a promotion as she doesn’t believe her young charge is ready yet and wants to hold her back until she believes she is.

In the course of doing her duty, in what she believes is a ‘routine’ job, Bethany loses her life trying to save that of a child, shattering Vera and her colleagues. Episode 2, Tuesday’s Child is all about the team trying to connect the dots and find the murderer of a young man whose mother had rejected him following a second marriage that saw her living in affluence.

The investigation takes Vera and Aiden to a fairground, a church and a vicar’s estranged son no one has heard from for nearly two years.

While this investigation is ongoing, they are dealing with the inquest into Bethany’s death, which concludes with a verdict of unlawful death and her being awarded a posthumous bravery award.

Episode 3, has Vera trying to make a connection between a hit and run victim in a remote valley, with a murder in a nearby Manor house where a young man lies stabbed to death on the floor of the dining room. She discovers a web of sadness extending back 20 years and an institution for young offenders. Another young Detective Constable Hicham Cherradi (Noof McEwan) arrives to take Blethyn’s place and is thrown in at the deep end.

As Vera finally solves the case, Aiden’s partner has gone into labour with their first child. The final episode for the series is set down by the sea, among the fishing fleets where feelings run high, when the body of a man dredged up with a load of fish puts in place another chain of events that includes people smuggling and another of Vera’s random acts of kindness.

While Vera may not work on a computer screen, she’s not lacking in the visual imagery required to paint a very real picture of her murder scene.

The only difference is that it is happening in her own computerized brain, one that has the ability to take the end result apart gradually and in sequence go backwards putting all the pieces slowly back into place until she has the complete picture. 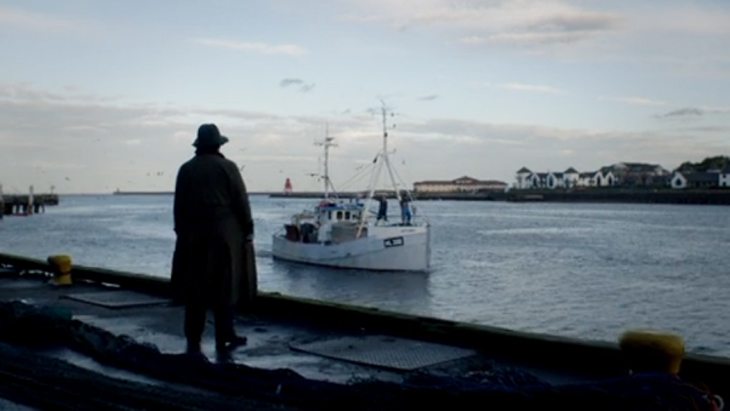 Vera may be an old school detective, but she has a 100% clearance rate. No wonder she will be back again in 2017. I for one can’t wait, she’s a bit of a girl after me own heart.

All available from iTunes, download to an Apple TV