Yesterday, today, tomorrow, art reflects in imagery, powerful messages that prove its power to help win both the battle and the war while expanding our understanding of different peoples, different cultures and different faiths.

Good news stories out of France are what we all want to hear. It’s indeed great news that a wonderful selection of extraordinary treasures from the Château de Versailles will visit Australia December 9, 2016 until April 17, 2017. They will be on show all summer at the National Gallery of Australia (NGA) in Canberra. Director Martin Vaughan and curators of the NGA have been working with their French colleagues, to offer Australians a rare glimpse of French art, design and style excellence.

Some 130 paintings, intricate tapestries, gilded furniture; monumental statues and other objects from the royal gardens will make up the display. Personal items that once belonged to Louis XIV and Queen Marie Antoinette will be sure to dazzle. The Château of Versailles may have lost its standing as the official seat of royal power in 1789 at the time of the French revolution, however during the nineteenth century it arose as a Museum of the History of France, founded at the behest of King Louis-Philippe who reigned 1830-1848

Throughout his long reign of seventy-two years Louis XIV perfectly understood the ideas and ideals of the Baroque style. It is said it ‘symbolized his absolute monarchy whilst retaining classical rationalism’. France’s talented craftsmen working during the reign of the Bourbon Kings reached a high point of excellence in manufacture.

This included the work of fondeurs-ciseleurs. They worked in bronze, casting and chasing the magnificent mounts so characteristic of French furniture at the time and were aided by doreurs. They applied real gold to the bronze mounts made by fondeurs-ciseleurs and they both worked within the guild system, which had been reformed in 1776.

It was 1660 when King Louis XIV first set horticultural wizard Andre Le Notre (1613-1700) to work on the gardens and 1669 when architect Louis Le Vau (1612-1670) and designer Charles Le Brun (1619-1690) joined him. This ‘dream team’ was well acquainted, having worked together a number of times before, including the original chateau of the Sun King, the Baroque style masterpiece Vaux le Vicomte. 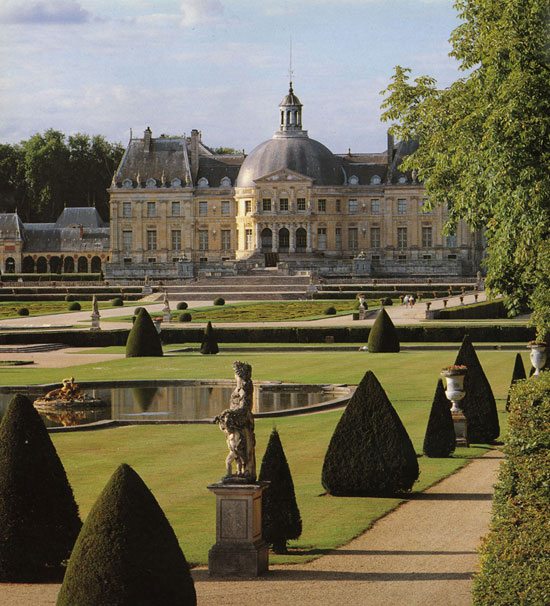 It included the first example in France of a façade divided into spans by a colossal order of pilasters, with a grand dome surmounting the centre of the structure. Louis commissioned them all to remodel his father’s Chateau – as a gentleman’s seat; grand without being pompous, full of light, air and cheerfulness just like a large country house.

Many of Louis XIV’s contemporaries believed that he was only creating all the buildings at Versailles to project his own honour and glory.

However he and his minister Jean-Baptiste Colbert knew that it was basically a vast scheme they were part to, aimed at making France pre-eminent in Europe. When Louis commenced work, Colbert knew that in the future more tradesmen would be needed to complete his Monarch’s vast vision. Cleverly he exempted families of over ten children from paying tax and rose the age at which young people could take religious vows. That way he took control of the church was able to supply workers and boosted both the population and the economy.

Workmen were forbidden to emigrate and foreign tradesmen were encouraged to come to France and help train the locals in new skills.

Italians constantly went back and forth as Louis set out to show the world he ‘could surpass the best of whatever was being done elsewhere’.

He wanted to add to his military and diplomatic successes the prestige of a refined civilisation for his benefit and to glorify France. His decision to live there permanently was made easy because he distrusted the nobility and disliked Paris intensely.

One could observe that if Louis XIV was regarded as a company CEO today, he would be admired enormously, as he managed to keep a great many people employed In his palace of the sun, the best from each discipline, who would ensure that Louis’ life indoors would be far more than tolerable. As the prestige of Louis XIV and the fame of Versailles mounted yearly, European princes and magnates all clamoured for a Versailles of their own, down to the smallest detail of its furnishings.

Colbert exploited this fact by setting up a customs barrier against any imports of goods that could be made in France.

He and Louis intended to keep the wealth, talent and power of the country before France and the world, and to instil fear and respect in the minds of friends and enemies.

Versailles became a giant shop window all Europe clamoured to buy from, and gained for France supremacy in the arts, which Colbert and Louis believed should always serve the glory of France.

Colbert worked 15 hours a day seven days a week, running all the government departments, except for that of war and between 1661 and 1671 the national revenue doubled.

By 1683 the revenue of France was four times that of England and ten times that of the Venetian republic, although tiny Holland remained the richest in Europe and the most envied by all.

Colbert was obsessed by its prosperity most of which came through commerce, banking, insurance, printing and seafaring. 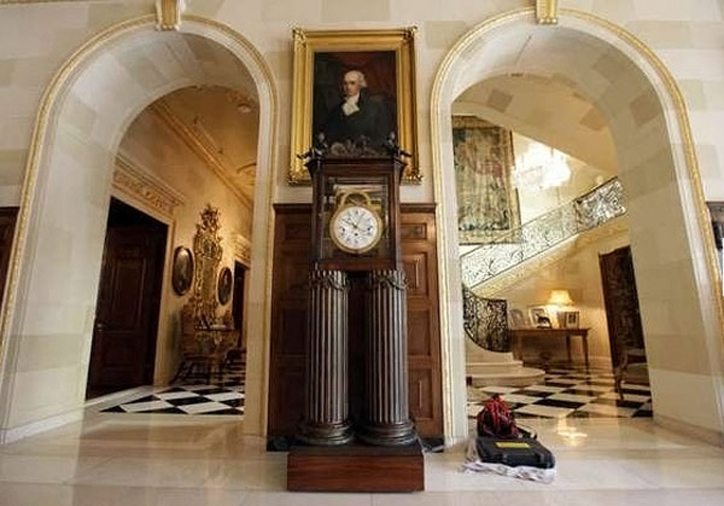 During the reign of Louis XV cultivation of taste in all things, including life was a concern of a polite society. Mme de Pompadour his mistress led the way imparting sweetness to the arts.

Her patronage of painter Francois Boucher enabled him to design for the royal tapestry and porcelain factories, as well as luxury goods for Parisian markets. During the last few years of her life there was a change in both attitude and fashionable taste in Europe towards the elegant, refined, and considered more ‘correct’ lines of classical design.

This was a direct result of the excavations occurring at Herculaneum and Pompeii from 1738 and 1748 respectively, the houses being excavated confirmed measurements and proportions used in the architecture of ancient times. The neoclassical style championed by Madame Du Barry, King Louis XV’s last official mistress, as well as the Austrian Princess Marie Antoinette (1755-93) when she arrived at Versailles to marry his successor, went from strength to strength.

Throughout the eighteenth century hand craftsmanship, in all phases of the decorative arts in both England and France, reached a high pinnacle of achievement in terms of artistic expression, quality of materials used and unmatched craftsmanship.

The German Roentgen family firm blazed a trail across eighteenth century Continental Europe as their wealthy and distinguished clients commissioned superbly made furniture in the neoclassical style.

They employed novel marketing and production techniques to service their international clientele, introducing extremely complex locking mechanisms as well as startling gadgetry for their desks, tables and important case furniture. I haven’t heard if a mechanical table of fine marquetry in satinwood with lavish decoration and secret compartments made by Jean Henri Reisner and the mechanic Mercklein is among them. I certainly hope so.

It’s a delight; especially made for Marie Antoinette in 1778 it could be put to different uses. The mechanism allowed it to be used for eating, also as a dressing table or as a writing table in two positions. The Queen was said to have kept it constantly by her side.

Philosopher, writer and composer Jean-Jacques Rousseau (1712-1778) believed beauty had a common source in ‘well ordered nature’ and that ‘taste is perfected with the same means as wisdom’…and what ‘must be done therefore…is…to cultivate taste. Considerably upgraded and re-gilded following World War II, the Chateau de Versailles today welcomes some seven million people annually through its gilded gates, all flocking to see its treasures, including the fabulous bureau du Roi made by Jean Henri Reisner, who was employed by Louis XVI from 1774 onward.

Lucky Australians can now enjoy a summer road trip to their national capital to view the treasures from the Chateau de Versailles.

Versailles: Treasures From the Palace

The Dream Team 1 – Rise of the Baroque, Vaux le Vicomte

The Dream Team 2 – Louis XIV and his Vision for Versailles