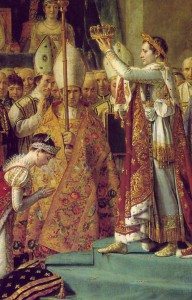 The coming to power of Napoleon Bonaparte (1769-1821) dramatically changed the political and social scene of France and world of costume. Napoleon recovered some of the crown jewels belonging to the former Kings and Consorts of France that had been sold off at the Revolution. Josephine had the Bourbon jewels re-fashioned and re-mounted in the shape of laurel leaf tiaras, combs, hair ornaments and bracelets. She wore them during an official visit to Belgium when Napoleon was first Consul. At Napoleon’s coronation as Emperor of France on 18th May, 1804 he wore a golden laurel wreath designed in the Greek taste. Each glorious leaf represented a military victory to his credit. The weight of this ancient symbol of victory sacred to the God of light Apollo was so great when it was completed it became necessary to prune it, to make it more practical for use. The attraction of gold stemmed from both its intrinsic brilliance and associations with wealth and power.

Buttons and buckles often set with gemstones, pearls, enamelware or cameos were made for centuries in decorative styles, now part of jewelry and costume history