There is a heightened expectation in Melbourne at this time of year as the National Gallery of Victoria (NGV), which consists of the NGV International on St Kilda Road and NGV Australia at Federation Square, announces its Autumn-Winter program for the following year.

The array of exhibitions for the summer to winter period announced or highlighted on September 16, 2016 by the NGV’s innovative Director Tony Ellwood are amazing, reflecting the institution’s commitment to ‘delivering dynamic experiences for diverse audiences’. The main news of the day announced by Hon. Martin Foley, Minister for Creative Industries, was that the always stunning Winter Masterpieces exhibition held in partnership with Art Exhibitions Australia at the NGV International in 2017, will feature Van Gogh & The Seasons, April 28 – July 9, 2017

This is yet another coup to help boost the economy of Melbourne and assist its ranking as the world’s most liveable city.

Minister Foley rattled off some very impressive figures. It appears over five million people have attended the Winter Masterpiece shows since they were inaugurated in 2004, and while balancing curatorial excellence with popular appeal, they have gathered a great deal of revenue. 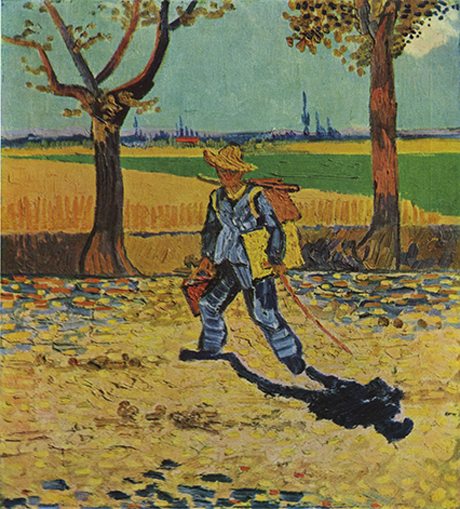 Vincent Van Gogh Walking to Work – Painter on the Road to Tarascon, August 1888 (destroyed by fire in the Second World War)

Dutch born artist Vincent Van Gogh (1853-1890) has been mythologized in history, as the ‘quintessential tortured artist’.

He did not begin his career in the art world until he was in his late 20’s and his brother Theo supported his career by giving him money for art supplies and cigarettes.

Growing up in his parents’ home at Etten in The Hague, Vincent Van Gogh had taught himself to paint by copying prints and studying drawing manuals and lesson books.

His aim was to master drawing in charcoal and in perspective, before he moved onto colour.

Vincent Van Gogh was fascinated with light and he and his artist colleagues of the ‘modern’ era post-Impressionism, used colour that dazzled, including red ochre dyes abundantly. They were quarried in Vaucluse, a department in the south east of France and they did not fade, even in the intense heat.

They were just perfect to be used for his Vase with Cornflowers and Poppies, completed at Paris in the summer of 1887. Highlighting the announcement and celebrating Vincent Van Gogh’s love of the seasons, a stunning floral installation created by Flowers Vasette of Fitzroy.

“Oh! That beautiful midsummer sun here…” Van Gogh wrote to painter Emile Bernard in 1888 from the south of France, “… it beats down on one’s head, and I haven’t the slightest doubt that it makes one crazy… Presented within sections devoted to each of the four seasons in nature, the exhibition will be curated by Sjraar van Heugten, Independent art historian and former Head of Collections at the Van Gogh Museum, Amsterdam.

The NGV’s innovative Director Tony Ellwood, who is supported by an excellent staff of curators and administrators, said of van Gogh ‘… his love of the seasons was deeply profound and played an important role in his life and practice. This reverence for summer, autumn, winter and spring and the eternal cycles of nature is seen in the energy and dynamism of his distinct brushstrokes, which almost leap off the canvas with vitality’. Vincent Van Gogh has over the century and more since his death, gained so much respect in the world of art it’s often hard to imagine just how hard he struggled to earn a living from his passionate pursuit of form, but reading his biography you will understand that his life was very hard.

He was a highly intelligent individual who worked with expressive qualities of colour and emphatic brushwork. Those developing their ‘eye’ for modernity will be in raptures viewing the some 40 paintings and 25 drawings that will be on display. His life’s work was basically produced in only a decade, the last three years of his life proving the most productive when his infusion of colour and form  was both imaginative and emotional.

Many of the works that will be on display come from the personal collection of Van Gogh, now held by The Van Gogh Museum, and accompanied by personal letters from his extensive collection also left to posterity.

There are a number of international institutions involved including, the Kröller-Müller Museum Otterlo, the Von der Heydt Museum Wuppertal and Triton Foundation, all in The Netherlands, The National Gallery, London and The Armand Hammer Museum of Art, Los Angeles. Vincent Van Gogh brought forth works that were either dark or light and en grisaille (shades of grey) many in rich sensuous colour. Colour caused him to be spontaneous, capturing the moment, the joy of life and revealing many of its secrets or truths.

In Provence you discover that colour is a perfect expression of a love of nature and for Van Gogh being at Arles in 1888 had emotive appeal because it was from nature that all of the colours in Provence evolved. Van Gogh wrote in his letters from the Yellow House in Arles in Provence where he completed many of his best works – ‘… my house here is painted out in fresh butter yellow, with raw-green shutters, and it sits full in the sun on the square where there is a green garden, plane trees, pink laurels, acacias. Inside its completely whitewashed and the floor is red brick. And the intense blue sky above…!’ Provence, Provence, even the name evokes images in the mind; of brilliant Van Gogh sunshine and the Provencal landscape. The style of Provence in every domain represents a view of French country style, which has been transmitted internationally.

This earthy, fertile, sun-baked region of France for many is the very essence and at the heart of French Country style charming visitors and influencing decorators worldwide. Van Gogh also wrote and ‘…when the green is fresh it is a rich green like we rarely see in the north, a soothing green. When it is burnished or covered with dust it does not become ugly for it, but the countryside takes on gilded tones in all the nuances; green gold, yellow gold, pink gold or bronzed, or coppery, and from lemon gold to an ombre yellow’

The charm and the strength of the French countryside today still gives modern traveller’s the uplifting experience Van Gogh felt, with its rich inheritance of weathered buildings that please the eye, keeping faith with a dramatic rural landscape in a captivating array of beauty.

A two-year stay in Paris 1886-1888 where he encountered the work of the Impressionists, innovative works by Paul Seurat emboldened him to experiment with brushwork.

He explored colour contrasts and bold style and 1888 – 1890 his paintings were on show at the Salon des Indépendants in Paris where they attracted attention. In 1890 the year of his death, Van Gogh was known to have modestly assessed his artistic legacy as of only ‘secondary’ importance, despite them having begun to attract critical attention. It was also 1890 when his works were exhibited in Brussels, where Albert Aurier a renowned critic described them as nascent, or being born.

During the decade after he had passed, Vincent Van Gogh’s name became integral to the world of modernity as he inspired and motivated those who imagined the future of art.