Artist and teacher at the College of Fine Arts in Sydney for many years, Andrew Christofides curated Visions of Utopia, a Wollongong Art Gallery touring exhibition, now showing until May 21, 2017 at Penrith Regional Gallery, Emu Plains.

On the gallery’s walls hung some of Australia’s finest artworks by exponents of abstract painting and non-objective art. The formidable and influential artworks of thirty artists exemplified an eloquent ongoing period of very significant Australian art history.

The purity of the classical properties of art colour line shape and surface were explored through diverse examples of visual clarity and aesthetics that resonated with creativity, innovation and integrity. Utopia the quest for perfection was evident in the compositional dialogue between artist and viewer. The sublime focus on the visual language inherent in the works is meticulous and visually rewarding.

These artists are inspired by a comprehensive and deliberate move away from representational art. They seek instead a celebration of the fundamentals of art. According to John Monteleone (Program Director Wollongong Art Gallery) “it is art for art’s sake unburdened or shackled by many of the concerns of other visual arts modes.” The syncopated rhythm of line and vibrancy of colour in Melinda Harper’s Untitled 2011 is optically thrilling to the mind’s eye. The visual concurrence of idea and form is balanced with a precise perceptive notion of colour. Harper demonstrates an innate ability to randomly combine colours that steadfastly create interest and assume a life of their own.

In her exploration of line and form she conceives shapes and movement that swivel, initiate change and excite. Her work flourishes with the energy evoked by idiosyncratic design, colour harmonies and repetitive lines.

Yet Harper confidently allows the seepage that occurs from the masking tape to remain as “it clearly shows they are painted by hand and not machine produced, the human touch is very important to me.” This quality within her work not only enhances the viewers’ accessibility to her creative process but adds a further personal dimension to her artworks. Col Jordon embraced the gestures of the pop art movement with a confident originality, a resolute appreciation of colour and its effects and a fascinating connection to pattern. Stimulus Response 1963 quivers with movement and sizzles with the artistic deviations of perception and expression of the times.

Jordan rides the wave of modernity through the use of an undulating notation of vibrant red impulses. These red signals accelerate across the canvas of green red and blue columns of flat colour to create tempo.

In Suzie Idiens Pink Red 2012 the shimmering surface of the bold block of pink polyurethane sits coherently next to the thin rectangular block of red. Shocking colour and textural smoothness is offset by the striking illusionary lines created between the blocks. Sensitive spatial awareness and the play of light are creatively linked in this geometric art form.

There is ambiguity between the seemingly simplistic appearance of the artwork and the complexity of thought and philosophical underpinnings that guide the restraint and elegance of Pink Red.

Harmony and arrangement take a divergent manifestation in this minimalist approach to abstraction. Idiens infuses the high gloss colour and structure with a vitality that originates from an optimistic certainty and a tribute to the realm of beauty within form. The grid is central to the work of John Plapp and this visual configuration is more delicately present in Least all turns almost now 1993. The austere grid motif evokes a window image effect where light filters shyly and gently. The fluorescent colours soften a melancholy emptiness in this grid that encourages introspection.

Bare canvas and undercoating free-hand strokes are astutely applied to denote the geometric abstract arrangement of the composition. Plapp accurately and sympathetically recorded his aspiration for pure form as he perceived it. Hilarie Mais’s The Grid 1987 is a more sculptural and architectural representation of the grid. Cobalt blue painted horizontal panels attached to a vertical grid created checked shadows on the wall.

This explicit form hailed geometric veracity and unequivocal abstraction. The language of shape and form was undeniably visible and the intrinsic structural logic informed the lines and patterns within the work.

Optical illusion is analytically conceived, geometrically designed and methodically executed in John Aslanidis Sonic No 49 2015. Many shapes advance and recede taking the eye on varied journeys that are cyclic. The oscillating shapes are pulled and pushed while new boundaries are relentlessly explored.

The squashed and curved lines vibrate with movement and pulse with pattern. Tumbling echoes of musical intervals overlap and caress the notes as they arch across the canvas.

The kaleidoscope of colours he applies amplifies his work with tonal nuances and they manipulate shapes. He investigates and integrates the visual components of colour, line and shape employing gradation, harmony and movement to structure his artistic vision.

John Aslanidis is passionate in his adherence to an exacting technique that infuses his artwork with rigour, precision and inventiveness. He wrote: “I do not wish to use in painting anything I do not understand. Things that have not been sorted out are of no use, to my way of thinking, there is no room for doubt in painting … I do not want to use everything in painting. I hope to know a little and to know it well, and, on this principle, build the world I believe in.”

The light of the yellow rectangle infuses the restrained configuration of converging austere shapes with a persuasive potency. Together with the smaller orange rectangle they effectively animate the painting with spirited control and tenacity. 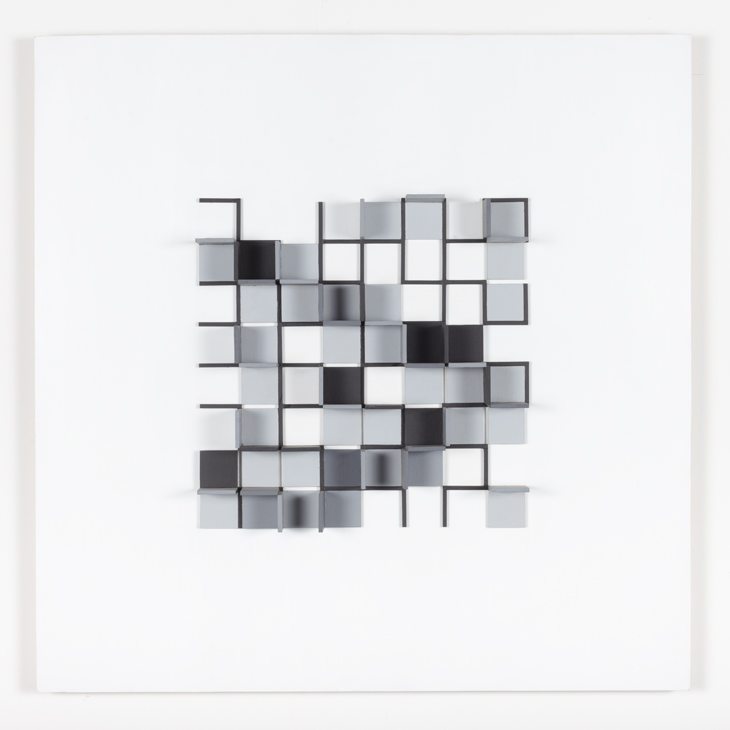 Andrew Christofides Untitled Construction 1984 resonates as a nocturne where images of the night time melody permeate the geometric pattern residing within the chromatic construction and black-and-white colours.

The vertical and horizontal forms of the construction map a disciplined mathematical paradigm. In this three dimensional artwork Christofides prudent placement of the square forms, confirms the compositional integrity and harmony within the arrangement.

The stillness between musical rests offers a contrasting tranquil silence in this serene artwork. Visions of Utopia is a powerful exhibition and discerning tribute to the history of colour, line, shape and plane within the Australian abstract and non-objective art visual mode from 1942 to 2015. It is a triumphant reflection of the diversity and complexity within this field of contemporary Australian art.