Leichhardt Espresso Chorus (LEC), a vibrant enthusiastic group of about eighty people who live in Sydney’s inner west and love to sing and make beautiful music, are holding a Vocal Works Weekend Workshop on March 1 and 2nd, 2014, which will finish with a Master class concert.

For a few special days singers who register will have a rare chance for expert vocal tuition with three inspiring tutors.

Manuela Ochakovski’s pupils sing her praises because she is well known for extending their skills. The Romanian born soprano has lived and worked in the Netherlands since 2002.

Over 20 years she has sung many important roles as a soloist in renowned opera houses and concert halls, particularly in Germany. In addition to her performances, she has always taught.

In her master class workshop she revises basic principles, explores their breathing, posture and emboldens them to sing in relaxed way, all-important methodologies to learn for those seeking to make a living using their voice. 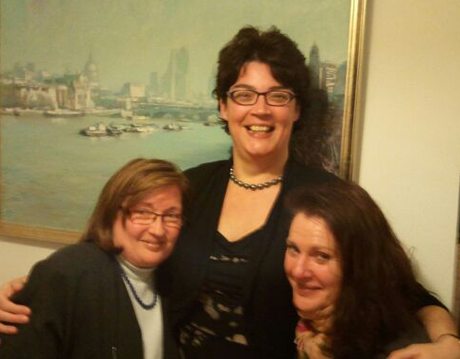 Manuela Ochakovski in London with Hilary Summers and Marie Angel

Her best students feature in Europe’s premier festivals with one of her students Hilary Summers singing in Salzburg’s last summer festival with the world-renowned coloratura mezzo-soprano Cecilia Bartoli.

Marie Angel performs regularly with British artist and composer Michael Nyman and his band throughout the world.

She’s much in demand and will sing a program of contemporary works with Sally Whitwell at the Adelaide Fringe festival just prior to this workshop so will have a great experience to share. As Artistic Director of the Leichhardt Espresso Chorus, Michelle is a strong advocate for choirs especially in a community sense, where they often restore faith and hope through music.

Both historically, and contemporarily choirs are mostly made up of an extraordinary group of people with outstanding voices individually but whom more than often, lack the courage to compete in the performance idiom.

However in community together they not only gather the courage but also the momentum to give outstanding performances collectively.

It comes as no surprise to me really that in downtown Leichhardt in Sydney, my hometown a love of the operatic voice is alive and thriving.

In post war Sydney Leichhardt was one of those special suburbs, which became a ‘little Italy’, as immigrants fleeing the ravages and destruction of life in war torn Europe flocked to find a permanent place to be where freedom was known to flourish.

At the time they were able to take advantage of a great deal of old housing in need of loving care so that they could have a base to rebuild their lives. In the process they helped to build Australia into the warm and friendly multicultural society it is today.

It is one of those places where pizza and pasta first reigned supreme, and waiters were likely to burst into song with a beautiful tenor voice at the drop of a hat. The Leichhardt Espresso Chorus, founded in 1998 aims to raise the bar on excellence in community music. They are all about commissioning local composers, encouraging local young talent and working with children, young adults and arts organisations to promote a love of choral music.

Accompanied by Benjamin Burton, the Leichhardt Espresso Chorus is prospering supported by an enthusiastic team who also archive and chronicle their history

They were inaugural winner of the national music in communities award, the state runner up in the ABC Classic FM choir of the year competition and they are the choir in residence for the Australian music festival Moorambilla, which their talented hard working Artistic Director started. They are helping to redefine the capacity of community choirs through concerts with orchestration featuring major works by such renowned composers as Johann Sebastian Bach, Georg Frederich Handel and Wolfgang Amadeus Mozart on one side of the coin. While on the flip side of the coin they are commissioning new works.

They have a reputation for innovation and have been involved in many landmark productions and their commissioned composers include the emerging talent Alice Chance.

She is working alongside such luminaries as Stephen Leek, Paul Jarman and Christopher Gordon, as well as and the seasoned acclaimed award winning Elena Kats-Chernin.

Their list of regular guest performers is also formidable, presenting musicians across a wide spectrum of styles and experiences and singers who are renowned for their virtuosity. Singing is so basic to man its origins are lost in antiquity and most likely predated the beginning of spoken language.

At what point it became meaningful is also unknown, but what is believed is that in many cultures spoken language and musical expression grew side by side, influencing each other.

After singing was established as an important aspect of worship for Christians creative composers changed the face of musical evolution when they were employed to elaborate the music to enhance worship, especially the Mass.

During the ninth century with the advent of polyphony, which consisted of two or more lines of melody as against a single line of chant, training the voice began and groups were formed to sing in praise of the Lord.

Choirs as we know them are now part of a tradition that is ongoing.

The rise of theatre and music together had a lasting impact on singing and when opera arrived, beginning as a ‘cerebral salon experiment’, it brought forth a whole new set of challenges.

Artistic latitude changed the whole course of music and singing. The workshops the Leichhardt Espresso Chorus are offering are reasonably priced and will take place in the ‘stunning acoustics’ of the Victorian neo Baroque styled Marrickville Town Hall. The Australian and New Zealand Association of Antiquarian Booksellers (ANZAAB) is holding their 40th annual Melbourne Rare Book Fair from Friday 26 July to Sunday 28th July at The University of Melbourne. Leading Australian and international antiquarian booksellers will bring a rich and diverse array of books together that cater…